Putting the Midwest on the modeling map

More than four thousand miles from Paris, Milan or London in an old brick building on Locust is a business known around the world for finding just the right face and frame for the most famous fashion designers in the world. 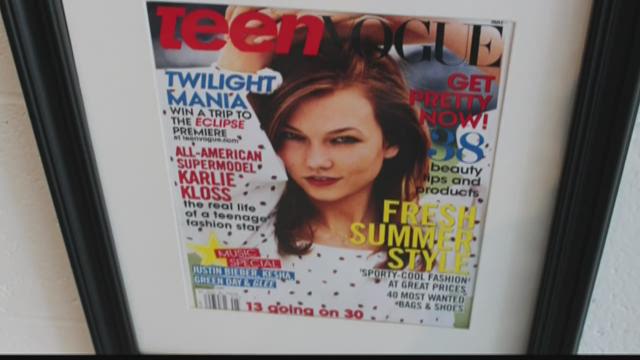 More than 4,000 miles from Paris, Milan or London in an old brick building on Locust is a business known around the world for finding just the right face and frame for the most famous fashion designers in the world.
"So Katie Fogarty we found in West County Mall just on a Saturday."
Mary Clarke and her husband Jeff discover...
"So here's Grace Hartzel, found her in a Cheesecake Factory in St. Louis."
Develop and manage some of the top models in the industry.
"I'm excited because we've never had a Sports Illustrated Swimsuit model, it's our first girl and this is her, Mila," Mary Clarke says opening up the magazine.
It's a sort of surprising business to be found in the middle of America, but that's part of what makes Mother Model Management stand out.
"I never could have written that this is how my life would unfold," she says.
Mary Clarke grew up in Iowa and in the 90's did fashion shows in the Cedar Rapids malls.  Then in 1997 life hit a low point.
"I was in the process of a divorce, I thought I was going to have to quit doing what I do for a living because well, it's crazy and it didn't make any sense."
A girl's night out led her to a college bar and a 19 year old who would change her life.
"I walk in and I see him coming this way inside the window and I was like oh my gosh he's so cool and one of the girls that was with me knew him from high school and she was like oh, that's just Chris Kutcher, like whatever."
She wrote her number on a napkin and Ashton Kutcher eventually called.
"Long story short that was February of '97, I took him to New York in July."
He got the Abercrombie and Fitch campaign, Calvin Klein jeans and well, you probably know the rest of that story.
He was exactly what she needed to know she had what it took to succeed, but succeed is a bit of an understatement.  She and Jeff Moved to St. Louis in 2001 and well the writing is on the wall.
"I think we've placed through these 20 years maybe 100 models.  Walking top runways we've probably had 30 or 40."
Including Karlie Kloss.
"Karlie came to the model search at West County Mall, she was 13 years old, she was 5'6, she was a baby," Clarke says.
On this day Jeff is in Italy for Milan Fashion Week checking in by FaceTiming.
"It was beautiful show," Jeff tells Mary.
Both of them pinch themselves on a regular basis.
"Like even today, I was having a quick lunch and just looked around and I'm like holy crap I'm in Milan, Italy.  Twice a year for the past 10 years it's kind of crazy," Jeff says.
So life is good for Jeff and Mary Clarke and the young men and women who catch their eyes.
"It's evolved into more than we could have even thought," Mary adds.