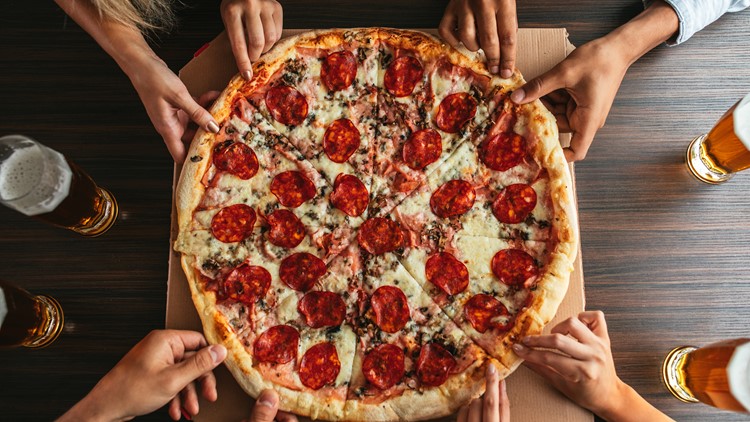 Grab a slice, or 4, at these local pizza spots

ST. LOUIS – We can probably all agree, pizza is good. But where can you find the best pizza in our area?

We asked our Facebook followers to give us their top pick for best pizza place in town and we got over 100 comments!

So, based off the feedback we received, we compiled a list of top pizza places to check out!

Roma’s Pizza got the most votes for best pizza place even though it is 30 minutes away from St. Louis!

Roma’s is described on Google as a “Familiar Italian outpost spotlighting traditional fare such as pasta and pizza in low-key surrounds.”

And some of our Facebook followers said it’s simply the best.

“Roma's in Bethalto. They have the best,” said Linda Roberson.

“Roma’s in Bethalto, IL is my favorite!” said Lisa Marie.

Roma’s serves pizza, pasta, salads sandwiches and includes appetizers. They even have a gluten-free pizza option!

Roma’s is located at 121 E Bethalto Drive, about 30 miles northeast of St. Louis. Click here for hours and a look at the menu!

Farotto’s is a family owned pizzeria that first broke ground in 1956 with a few pasta options, limited seating, carry out and a car-hop service.

Over the years, Farotto’s expanded and grew into what it is today.

Farotto’s is a “place where you can sit back, relax and enjoy yourself,” according to its website.

Farotto’s is located at 9525 Manchester Road about 15-20 minutes from St. Louis. Click here for hours and a look at menus.

The owner of Alfonso's is from Peru, but his wife is originally from Carrolton. The two met in college in Chicago and returned to the area to open the pizza joint back in 1991.

The bread and pizza dough are made from scratch and baked fresh in house. Most of the meat is purchased locally and pre-cooked “in order to reduce the fat content,” according to its website.

The owners said they don’t serve fast food, but it is well worth the wait.

“We don't serve fast food. We serve real food and real food takes time to prepare and bake, but we believe you will find it worth the wait.”

The restaurant is located at 514 N Main Street, over an hour north of St. Louis! Click here for hours and a look at the menu.

Faraci’s Pizza was started in 1968 at a three-table dining room at the corner of Suburban and South Florissant Road.

Farcai is very St. Louis because they use provel cheese on their pizzas that they hand slice in house. They also make their pizza sauce and dough from scratch.

Each pizza is made to order and is cooked in a brick bottom oven that produces a crispy crust.

The owners of Farcai said they take a lot of pride in what they do.

“As you can see, we put a lot of pride into making our pizza and it is made with only the best ingredients,” they said on their website.

Faraci has restaurants in Ellisville and Ferguson. The Ellisville joint is located at 15430 Manchester Road about 30 minutes from St. Louis. Click here for hours and a look at the menu.

Last but not least, the square beyond compare!

Since its original St. Louis style pizza, it’s no surprise Imo’s made the list. But what was surprising – the amount of people who said they didn’t think Imo’s was the best.

Imo’s has several locations in St. Louis. Click here to find a restaurant near you.