If your child had a heart condition and was about to have a cardiology procedure, how would you feel if there was a technology to show you what they did to your son or daughter's heart? 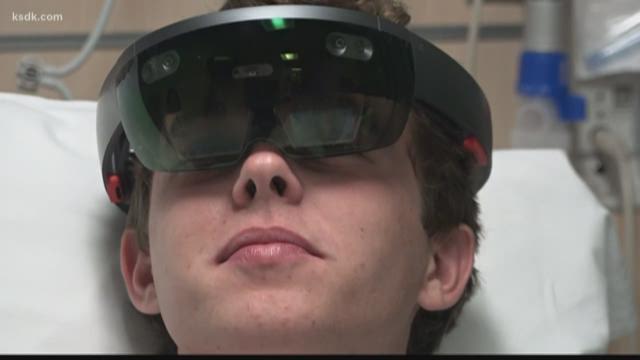 When the nurse enters the room, she greets Jeffrey and his parents with a smile. All three smile back.

As he breathes in and out, there’s a sense of familiarity, since this is his second ablation procedure within a span of two years, but there’s also some anxiety.

"Are you nervous?" another nurse asks. Jeffrey responds, "Yeah. A little bit."

These past two years have been tumultuous for Jeffrey and his family ever since he experienced these symptoms, unexpectedly, after a basketball game.

It’s one of those moments, as a parent, Sara Jeffrey can relive instantly.

"So, I went like this," Jeffrey put her arm up to the wall as if she's reaching out to touch her son's chest. "I'm not a doctor, but my immediate reaction was, 'That must be his heart beat, and mine?' It just didn't register."

As a result, Sara took Chase to urgent care, and after a series of EKG tests, he was rushed to the hospital.

“I think it was probably a student physician or some sort of very young doctor," said Sara. "She comes out and she’s so happy and she goes, 'I have great news. Chase is stable and he has a rare heart condition!' And you’re just like, 'What? Okay?'"

Chase was diagnosed with Wolf-Parkinson-White Syndrome.

"He was born with this extra electrical connection inside of his heart," said Dr. Jennifer N. Silva. "Now, why did it choose to act up when he was a teenager, I don’t know. Could it have been there before, and maybe as an infant or baby and he didn’t have the words? Absolutely.”

It was a total shock, considering Jeffrey is active, and has grown up playing a variety of sports for his high school, Father Tolton Catholic.

"I mean, his heartbeat was 300-plus beats per minute and I guess when it’s in the lower chambers of the heart that’s when it’s deadly," said Sara. "That’s apparently when athletes can drop on the field and you never knew what happened."

This time around Jeffrey’s procedure was a bit different because he was a part of a study that involved augmented reality. It's a study and technology that's been created by a husband and wife duo who are doctors at Washington University.

Jon and Jennifer Silva are revolutionizing the way doctors view the heart during a procedure, and it's all thanks to a pair of goggles. Each doctor has their own mental viewpoint of the heart, so when they slip the Hololens goggles on, they’re able to see a common 3D model.

“I’ve been doing this now for almost a decade, and looking at these kids' cardiac holograms, I am understanding more about their anatomy and the way it relates to their electrophysiology in a way that I’ve never done before," said Dr. Jennifer Silva.

The Hololens goggles give Dr. Silva and her team a more complete perspective, which ultimately will lead to more accurate procedures with fewer complications.

“It helps people use the same language," said Silva. "We had three electrophysiologists who looked at his (Chase Jeffrey's) raw data and there were two different interpretations of where his pathway was. The fact of the matter, it really was only in one place.”

And for Jeffrey and his family, being able to see a 3D image of the heart, while learning of Dr. Silva’s plan for the procedure, was comforting.

"Clearly since I know very little about the heart, to see it just in front of me in an enhanced large version was unbelievable," said Sara.

“When they explained everything to me about where my little abnormal connection was I just guessed," said Chase. "But with the goggles on you can see exactly where your body is messing up and that was pretty cool."