His family set up a GoFundMe account in hopes of raising money to offset his medical expense. 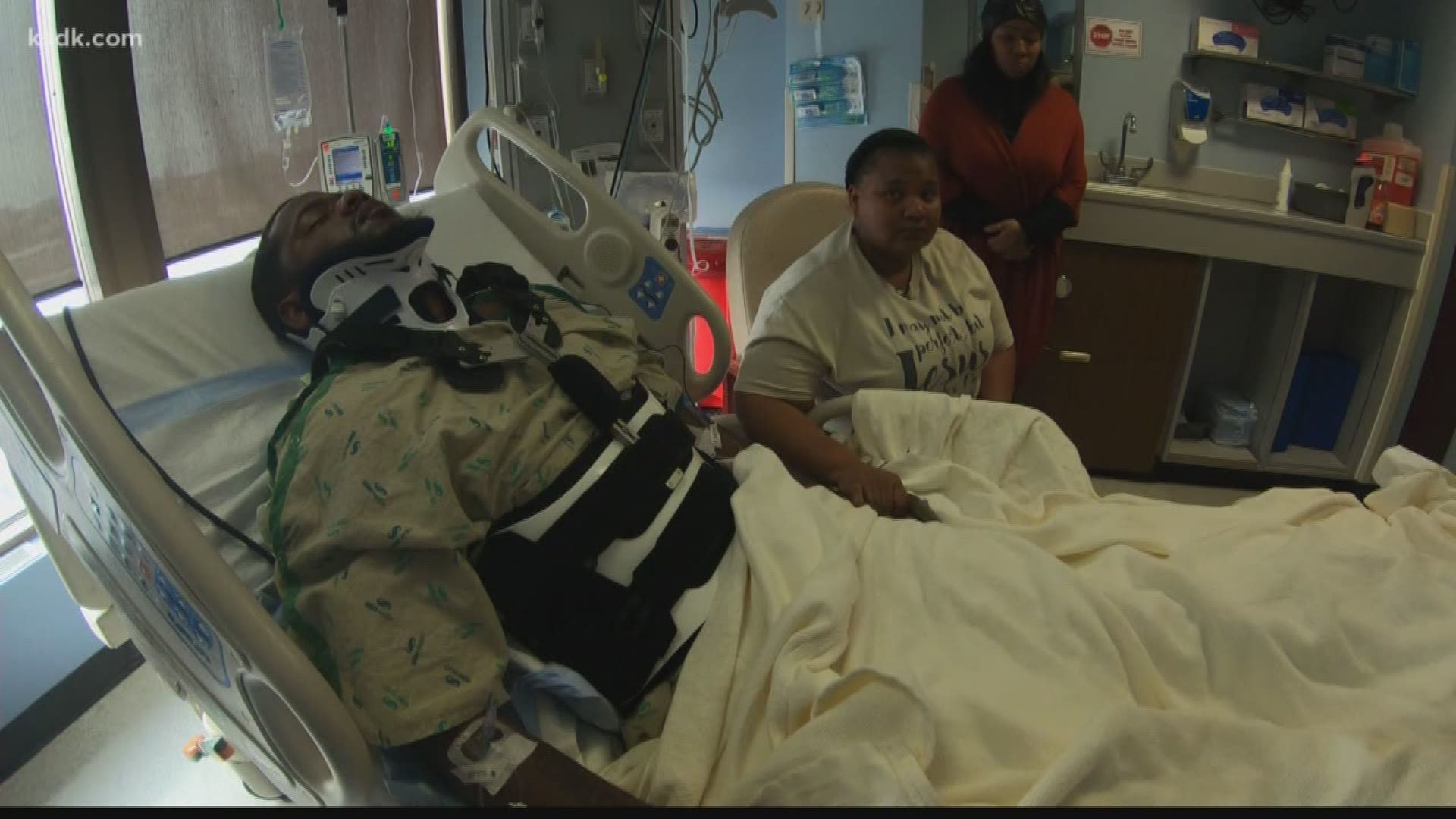 Right now, the motor that raises and lowers his hospital bed is about the only way he can move.

"I'll be paralyzed for the rest of my life," Walker said from his bed in the intensive care unit at Saint Louis University Hospital.

Instead of life in a Level 1 Trauma Center, Walker was working as a personal trainer and as an Amazon delivery driver with a plan for his future.

"I wanted to go back to school and play college basketball, play with my son just like any other father would," he said with his family beside his bed.

Tuesday, Walker said he had just finished his Amazon shift when he stopped in a St. Charles Target parking lot to help a fellow driver.

He admitted he parked in a disabled parking spot. What happened next, he and his family can't understand.

Walker said Thomlison approached him and "asked me why the hell I parked in a handicapped spot and I told him, 'I'm gonna move it,'" recalled Walker. "And he kept harassing me."

Walker said Thomlison punched him and he fought back.

"When he pulled the gun out my eyes were just amazed. I tried to run in between two cars. He had a nice aim and hit me right in the spine," said Walker.

Prosecutors said surveillance video shows Walker trying to run away when he was shot in the back. The bullet paralyzed him from the stomach area down.

Lohmar said Thomlison knows guns and should have known better.

"He's been through citizens police academy not once but twice," said Lohmar in a press conference to announce the charges. "He has concealed carry permit. So, he knows when and when he's not supposed to discharge a weapon.”

Walker's mother Regina Walker said her son should not have parked in the disabled parking spot.

"He should have gotten a ticket at worse. But to be in a wheelchair ... his child will never remember seeing him walk or play with him," she said sitting next to her son's hospital bed choking back tears.

"Why would someone do this to my child?" she asked. "He's not in a gang. He's not running the street. He was at work.”

"I just thank God I'm still breathing, and I still have opportunities," he said in a low voice with a brace around his chest and neck. "Just not the ones that I wanted."

"I forgive that man," he said of his shooter. "I just have to move on. Justice will be served. I don't want to die with that on my heart."

"I come from a strong family," Walker said. "And I'm a strong individual myself. And that man up above, there's nothing he cannot do."

Walker's family said despite working as a trainer and as a driver for Amazon he does not have medical insurance. They have set up a GoFundMe account in hopes of raising money to offset his medical expense.

"I'm trying to make sense of it," said his mother Regina. "I know that what I can't understand God already knows the end of it, so I am truly trying to trust the process."