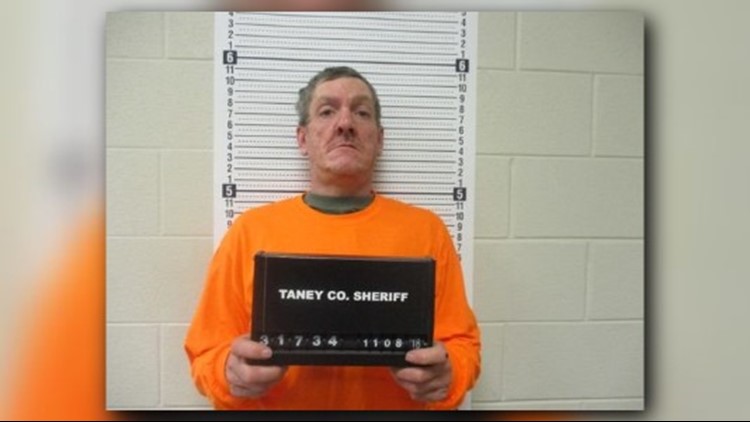 POINT LOOKOUT, Mo. — A convicted felon from Branson was charged Thursday in the alleged kidnapping and sexual assault of two College of the Ozarks students.

Robert J. Hyslop, 49, was booked into the Taney County Jail, where he is being held without bond.

Dan Luttrell, investigator with the Taney County Sheriff's Office, in court documents obtained by the News-Leader, said Hyslop, who was still on a supervised probation after he pleaded guilty in a 2017 drug case, admitted he had been high on methamphetamine for three days when he spotted two students — a male and female — asleep in a car.

According to court documents, the two students told Luttrell they returned to the Point Lookout campus just 10 minutes after the 1 a.m. curfew on Monday, Oct. 29 and found the college's front entrance, known as the Gates of Opportunity, locked. It reopens daily at 5 a.m.

After a quick stop at the Kum & Go convenience store on Gage Drive, not far from U.S. 65, the two told Luttrell they parked in an adjacent commuter lot and went to sleep. A couple hours later, Hyslop allegedly knocked on the window of the car.

Initially unable to wake the students, Hyslop allegedly smashed the passenger window with a blue-handled hammer. He showed the college students a black handgun, told the female to move over and the male to drive, documents say.

Court documents allege Hyslop admitted he told the students to drive to the overlook on historic U.S. 165.

At that location, and still at gunpoint, he allegedly forced them to undress and perform sex acts on each other. He also made the female touch his penis.

Following the incident, which allegedly took place between 3 a.m. and 6 a.m., Hyslop told the students to drive him back to his dark green vehicle, which had temporary tags.

The students immediately contacted law enforcement and were able to provide detailed descriptions of their alleged attacker and his vehicle. In addition to a height, weight and age range, they told a detective the man was wearing a blue jacket with a resort logo and did not appear to have any teeth.

The sheriff's office reviewed surveillance video from the Kum & Go and issued an alert through the Missouri Information Analysis Center, or MIAC, system. It is a partnership to share information between local, state and federal authorities.

Late in the week, a sheriff's deputy spotted a vehicle that matched the description given by the students. Two occupants were inside and the driver was Hyslop, who officials say agreed to talk to investigators.

According to court documents, the statement Hyslop provided matched the surveillance video and what the college students reported to investigators.

If convicted, Hyslop faces the possibility of life in prison.

Following a tip, the News-Leader contacted the sheriff's office midweek to confirm if the incident was under investigation and obtain a copy of the incident report. An investigator said Sheriff Jimmie Russell was on vacation all week and no one else was authorized to provide comment to the media.

As far as the incident report, the News-Leader was told the custodian of records, who handles Sunshine Law requests, was also out of the office for the rest of the week.

Ozarks Technical Community College's Table Rock campus is near the commuter lot on Gage Drive. In response to a question from the News-Leader, college spokesman Mark Miller said OTC was not notified about the incident. "We are a little bit concerned that neither C of O or Taney County reached out."

College of the Ozarks declined to confirm any details regarding the alleged incident, but Valorie Coleman, public relations director, issued this statement: “The College of the Ozarks issued a safety alert to advise members of the campus community of a potential safety risk on Oct. 30, 2018. On Oct. 29, College security received a report of a potential assault that occurred at an off-campus location. The issue is being handled by the Taney County Sheriff’s Department.”

The college referred follow-up questions to the sheriff's office. "Our main concern is to support the students who were involved in the incident, and the most important way to do this is to protect their privacy," Coleman said.

Coleman and Sue Head, the college's vice president for cultural affairs and dean of character education, answered follow-up questions Saturday. They said the front gate of the college is locked from 1 a.m. to 5 a.m., but students can call a 24-hour security number to unlock the gate.

"We do have the phone number posted clearly at the front gate," Head said.

The college officials, Coleman and Head, said there are legitimate reasons for students to break curfew, including working off-campus jobs. "If they are habitually late, they are going to have to have a conversation with the Dean of Students," Head said.

Coleman said the college is supporting the students and has offered them confidential counseling.

"We are sick over this incident for the students. We are trying to protect their privacy," Coleman said. "The fact that all the details have been in the media, I just hate that for them."