A delivery driver was robbed and shot after dropping off a customer's food in the Tower Grove South neighborhood on Sunday. It's the second delivery driver to be robbed in the area in the past week. 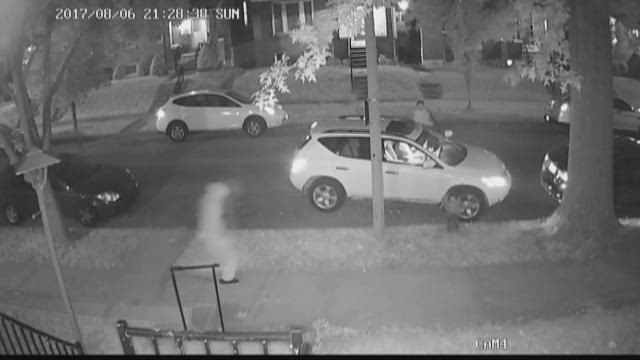 A delivery driver was robbed and shot after dropping off a customer's food in the Tower Grove South neighborhood on Sunday. It's the second delivery driver to be robbed in the area in the past week.

Scott Furda was hungry Sunday night and decided on delivery. But, minutes after getting the Chinese food he was craving; he got more than he could chew. After watching video from his home security camera, Furda was shocked by what he saw. The delivery driver, who just dropped off his food, was robbed right in front of his house on Humphrey.

"Two guys came up on him, demanding money from him," he said. "I think it's messed up."

The entire incident, which only last a few minutes, was captured on Furda's security camera. In the video, you can see the suspects, wearing hoodies, come out of nowhere.

Held at gunpoint, the delivery driver decided to fight back, but after the brief scuffle, he was shot in the leg. The suspects took off while the driver limped out of his car onto a nearby porch.

Nickia Harris lives around the corner from where the incident happened. She thinks she may have spotted them walking on her street.

"The one guy who had his draw string pulled did not make eye contact with me whatsoever,” Harris said. “The other one looked away and they walked a little faster looked back again and when I crossed the street to go inside I didn’t see them anymore."

The search for the suspects is still on, but neighbors are concerned.

"Someone gets shot right in front of your house, it's a weird situation,” Furda said. “It's a first time for me, but at the same time, crime does happen."

Crime, he believes, is happening far too often.

"It's been escalating,” he said. “Things are popping off all over the neighborhood."

At last check, the driver was listed in stable condition.

In Furda's security footage, the driver said he was from Bo Fung Chinese kitchen. 5 On Your Side called the restaurant and they deny that one of their drivers was shot. Police are investigating the incident. There have been no arrests made.