Officers tried to catch the suspects, but they went into a nearby wooded area and officers were not able to find them. 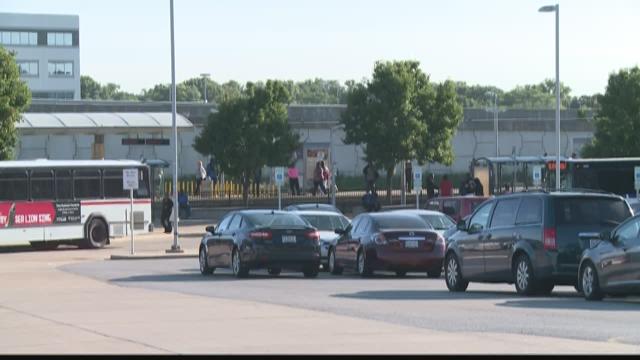 After a 14 year-old boy was assaulted and robbed at the North Hanley Station over the weekend, people riding the MetroLink are starting to worry about how safe the train is.

Sunday, St. Louis County Police officers working the MetroLink unit responded to the scene after they saw a group of people fighting as they got off the westbound train at the North Hanley Station.

One of the suspects flashed a group of MetroLink riders with what appeared to be a firearm. Two suspects immediately fled from the area.

Officers tried to catch the suspects, but they went into a nearby wooded area and officers were not able to find them.

According to police, the two suspects approached the teen while he was riding the train. When the train stopped, the suspects demanded the teen’s bag and when he refused they began to assault him. Another group of people on the train tried to stop the assault and that’s when one of the suspects flashed a firearm.

Both suspects appeared to be in their teens.

Jeff Portman and his family were on their way to a Cardinals game Monday afternoon. He's been taking the MetroLink since it first began operating.

"It was new to St. Louis and bright and shiny and clean and exciting and we enjoyed riding it," Portman said.

The recent violence on the MetroLink has changed his opinion on how safe and nice the rail line is. And with the most recent MetroLink incident, he questioned if he should even take it today.

"The big concern was safety. I'm getting older. I can't run like I use to," he said.

St. Louis County Police, who has since took the lead on securing the MetroLink, told Five On Your Side they've multiplied the amount of officers assigned to the MetroLink. They've also been using undercover cops to combat crime.

Hughes doesn't have a problem with riding the MetroLink, but says he understands why people think it's dangerous.

Portman thinks someone at the North Hanley station should validate tickets because at this point he feels anyone can walk up to the platform. He also believes turnstiles will help improve security, something the County police have broached.

"I have never seen anybody check them,” said Portman.

Even though Hughes feels safe, he agrees more can be done too.

"If it's more security, it's less of a problem."

When asked if he would let a child ride the MetroLink alone, Portman replied.

"Not a snowball's chance."

In the meantime, Portman will not let the violence stop him from riding the MetroLink.

The victim was not injured, but a satchel and cell phone were taken from him during the incident.

Metro is not immune to the crime occurring in the communities we serve. Even though serious incidents on MetroLink are rare, we will continue to work with our police partners to make the system even more safe.

We are encouraged by the renewed commitment by our transit partners and the St. Louis Metropolitan Police Department, St. Louis County Police Department and the St. Clair County Sheriff’s Department to dedicate law enforcement personnel to address the security issues. As stated in the recently signed Memorandum of Understanding with our three transit partners, St. Louis County Police have assumed responsibility for securing the MetroLink system, and we will keep working with the jurisdictions so MetroLink riders and employees can feel safe on the system.