Trying to get a glimpse of the eclipse from an airplane

Is the view better in the air than on the ground? We sent Ryan Dean to find out. 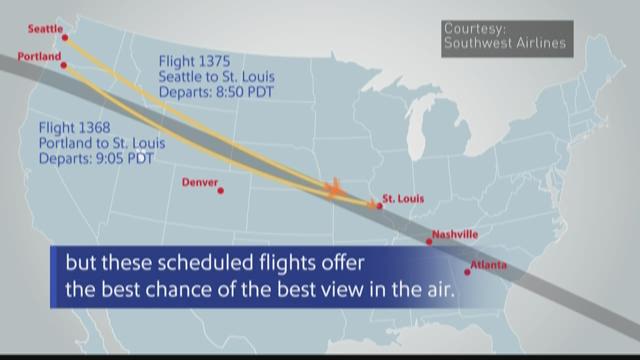 Not only did 5 On Your Side have crews on the ground covering the eclipse, but we also sent a reporter 35,000 feet up in the air to see the view. Ryan Dean traveled from Denver to St. Louis, landing around the time of totality.

Ryan was on one of five flights Southwest Airlines identified as having the greatest likelihood of offering those in the air the best view of the eclipse. Three of the flights landed in St. Louis, including flight 1577.

At the end of the flight, passengers had mixed reviews of the eclipse experience. Most were pleased with the service provided by Southwest: free eclipse glasses and complimentary "cosmic cocktails." But views were limited for many passengers. The sun was above the plane, and clouds blocked views for parts of the flight.

"I wish I could have seen more...but from what I did see it was awesome," said Mike Murphy from North St. Louis County.

"I was hoping that the sun would have been at a better angle, it was above us most of the time, but it was still a pretty cool experience," said Lynn Socha, a St. Louis resident that attends college in Colorado.

"Kind of disappointing flying in because I thought we would be totally dark in midair at 30,000 feet, but when we landed and it was dark it made it worth it," said Columbus, Ohio resident Lewis Burrowes.