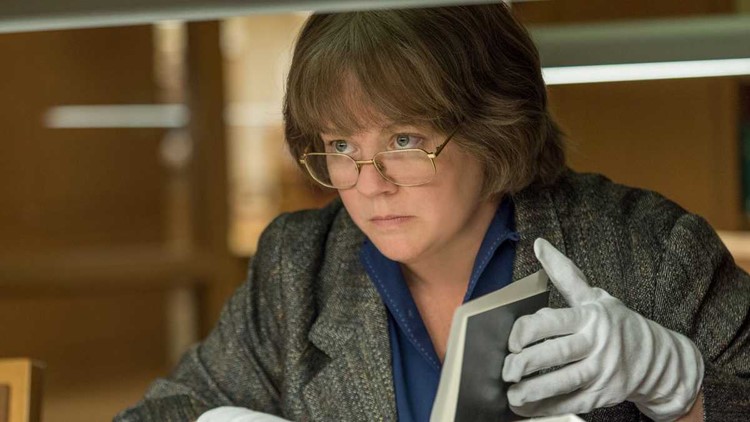 A never better Melissa McCarthy owns 'Can You Ever Forgive Me?'

By the age of 51, novelist Lee Israel (Melissa McCarthy) was stuck in a creative rut. Once a placeholder on the New York Times bestseller list, Israel's latest books found their home on a 75% off table. Told by her agent to change styles or seek a different career, Israel did what many others thought about, yet didn't have the guts to pull off: forge your way back into the spotlight.

The result was Can You Ever Forgive Me?, a memoir from Israel about her literary debauchery, which was adapted by Nicole Holofcener and Jeff Whitty, and directed by Marielle Heller. Told with a simple paint brush and a moderate shade of poignancy, the movie works well as a compelling character piece detailing the most unconventional route back to relevancy.

For years, Israel profiled the likes of Katherine Hepburn, Estee Lauder, and Dorothy Kilgallen, forging letters written by the famous women by recreating them and adding a few words at the bottom of each one. She sold these fakes to bookstores, making up to $600 off a single one, eventually partnering up with Jack Hock (Richard E. Grant), a charismatic yet flawed New Yorker who had a particularly effective style of salesmanship.

Before I walked into this movie, I will admit that I am not a Melissa McCarthy fan. A comedy actress who relies on the same brand of fat girl jokes and star of many lukewarm comedies, she didn't lend an upcoming film much desire for me. Can You Ever Forgive Me? changed that. This is easily her best role and a performance that puts her into the conversation for the awards season.

McCarthy was born to play Israel, a sharp-tongued woman who would much rather hang out with a cat than find a relationship with a human being. Dressed like a punk rocker walking onto the stage ten minutes late, Israel would put down anyone in her way, from Tom Clancy to her own agent. She wasn't an easy woman to get along with or tolerate; a great writer with a chip on her shoulder the size of the Grand Canyon.

However, there was a tender desperation about her, and McCarthy taps into that here as we watch Israel fall down the rabbit hole of forgery-powered bad choices. The actress' ability to slip a little humor into a sadly true yet oddly triumphant story is a gift to the film, like a thief leaving a note for a detective under the door of his apartment.

Grant gives a little extra to a role that could have felt like a tacked-on character, lending Hock a thrilling quality of fearlessness that may not have been genuine, but helped Israel find some joy in human interaction. The British actor forms a solid bond with McCarthy, bringing some wise to her unfiltered cracks of humor.

The bluesy jazz soundtrack aides the film throughout, giving the film a lighter tone, which helps with some of the subject matter.With this kind of story, you don't need an overwhelming amount of music or background color to illuminate Israel's story, because her adventures provide all the juice that is required to make this movie work.

The story doesn't have a profound message for viewers, essentially reminding writers that word theft carries a price while giving off the notion that for some people, it can provide a respite from the common burial ground of creatives. When asked near the end of the film if she would do it again, Israel tells a judge that she wouldn't-but the viewer knows better. Sometimes, you do a bad thing just to get by, but in the process, find yourself.

Think about it. All Israel had to do in order to find her voice again was dip her feet in forgery and debauchery. Once again, the path of most resistance, but one where she ended up paying her dues. After all, the reason we have a movie to watch here is due to Israel finding a way to make something out of her bad deeds. She wasn't an evil person; just a desperate soul trying to break even in life and pay her bills.

One of the hardest things for a writer to work with can be an empty page and mounting debt. You can't shut a creative outlet in your head off. It's the following actions that separate the good from the bad. In the end, as bad as it gets for Israel, McCarthy makes you feel sympathy for her. That's the mark of a true talent. One can only hope the actress keeps taking these kind of chances. Cheers to Heller for having the unconventional knack in giving McCarthy the opportunity to shine.

Here's the thing: another actress, such as Kristen Wiig, could have come in and played the role decently without leaving a mark. McCarthy takes this role and makes it her own, showing the harsher qualities of Israel while dialing into the tender moments as well. This role required that extra push of dramatic skill, a place McCarthy finds her way to over the course of two hours. No one else could have pulled it off quite as well.

McCarthy's performance makes Can You Ever Forgive Me? memorable. She gave Lee Israel's story a heart and soul, which wasn't an easy task. I went in thinking she couldn't pull it off, and left wanting to see more of her. That's the movies for you. Pure magic. Sometimes, a role needs a good actress. Sometime, an actress needs a good role.

Yes, I can forgive the last six films, Melissa McCarthy, for this one. Thank you.