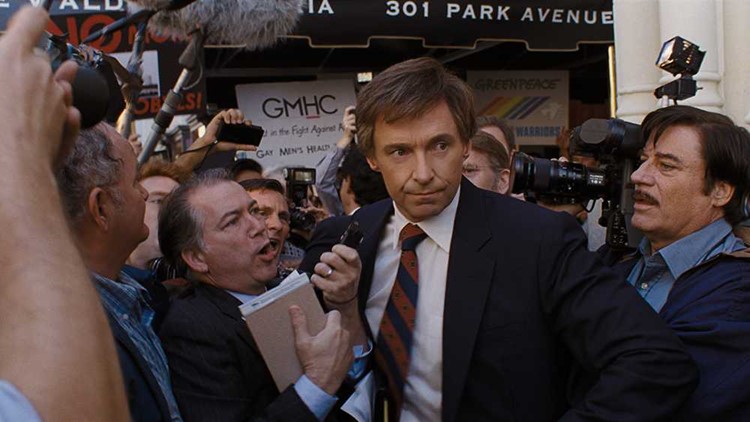 Gary Hart (Hugh Jackman) thought he was untouchable..above the law...or at least beyond reproach. It's too bad he was a man lost in time, living in the wrong decade. A smart man who couldn't resist being incredibly stupid. 20 years ago, the man of the people changed the world of politics forever, introducing moral arguments that reverberate today.

In 1987, Hart was 12 points ahead of his fellow candidates for the Democratic Party in the Presidential election and 13 points ahead of Republican candidate George Bush. With three weeks to go in the primary election, Hart was beloved by young voters and had the looks and ideals to make it to the White House, before his arrogance threatened it all.

Jason Reitman's The Front Runner wastes little time in thrusting the audience into the middle of the competitive political landscape of the 1980's, picking up in 1984 when Hart conceded his spot in the race after a commercial ruined his campaign. The movie is quick on its feet, moving ahead in years during an instant. Reitman's crackerjack shooting style fits the story, moving quick and piercing a hole into the era where the world of politics changed forever within one week. As I watched The Front Runner, I got a whiff of the newsroom scenes of Steven Spielberg's The Post in Hart's operation, which creates a kinetic vibe.

From the outside, Hart was a re-imagining of John Kennedy: 46 years old, Democratic, good looking, supported by the strong-willed Lee (Vera Farmiga), and a surge of support from all sectors of the voting world. Behind the strong looks and words though was a fallible man who held secrets. A man who once stood on top of the Rocky Mountains and pledged his loyalty to the highest standards of integrity and ethics...only to throw it all away.

Based off Matt Bai's (who co-wrote the screenplay with Reitman and Jay Carson) book, All The Truth Is Out, Reitman's film doesn't pick a definitive corner in this film, instead choosing to stand to the side like one of Hart's aides and just let the actors and actions unfold at a leisurely pace. This method makes the film irresistible and fascinating while keeping it from being overly powerful. If Reitman had taken a hard line to the material, like a Rob Reiner or Spielberg, the weight behind his punch would have been felt more. By riding Bai's take and letting the audience be the judge, he sticks to his guns and creates a light air around a dramatic and bittersweet story.

Jackman is simply tremendous as Hart, showing the imperfect man for all he was worth, warts and all. The actor finds new ways to strip down characters others created and rebuild them as his own, whether it's a reluctant superhero or a vengeful father looking for his kidnapped daughter. He makes Hart sympathetic and easy to root for initially, and thus creates a lot of anger and head-shaking towards the end of the film. If you are mad at Hart by the end, it's due to the fact that Jackman made you care so much. Right up until the moment a question from a young Washington Post reporter broke him, the actor makes you believe in Hart's torment.

Farmiga is a force to reckon with as Lee Hart, the woman who looked past Hart's mistakes as long as she could, standing by him like a tractor would next to a tornado as it blew through town. During a scene near the end of the film, she locks horns with Jackman for a quiet scene that starts to boil more as it goes on. All Reitman does is set a couple cameras up between them, allowing the actors to make a dent.

The supporting cast is uniformly excellent: J.K. Simmons as Hart's campaign manager, Bill; Chris Coy as the gung ho Kevin Sweeney; Steve Zissou as the Miami Herald reporter who broke the story; Bill Burr as a Herald reporter; Molly Ephraim as Irene Kelly, a Hart campaign worker who ends up as disillusioned as her boss. Kevin Pollak, Oliver Cooper, and the indispensable Alfred Molina also put in good work.

I enjoyed The Front Runner as a fast-paced tutorial on what not to do in the world of politics. In the 1960's, Kennedy and Lyndon Johnson could do almost anything behind closed doors and get away with it. This story shows you how much all of that changed over the next 20+ years. Reitman's film creates a conversation as you leave the theater, even if he doesn't follow you into the forest towards the fire he created. The stellar cast and fascinating subject of Hart's ordeal creates an entertaining experience.

Is there anything profound here? No. Is this film timely when women's rights and gender equality wars are still being waged 20 years later? It sure is. Will this movie move you? No. Does it make you think? A lot.

The Front Runner reminds you of the power from backing up your words with action, and how the failure to do so-forgoing a promise-can result in vulnerability that you can't spin away from. It'll also make you sit back and imagine what if? What if things had played out differently? How much of an effect did Hart have not only on American politics, but America itself?

That check is cashed in full by its star. Jackman's performance makes The Front Runner a true contender. You'll like, admire, love, despise, hate, and be invigorated by his actions-all the while asking why and for more. You may not like Hart, but you'll love Jackman. Talk about a guy making sure this front runner doesn't fall out of the race.

You can know little about politics, primary elections, and electoral votes-and still get a kick out The Front Runner. While it won't show up on year-end best of the year sheets, I think it serves its purpose of informing and entertaining without preaching too hard.