"The approach is still going to be: wear a mask, social distance, don't gather in crowds, all of those things we would be doing otherwise," Dr. Alex Garza said 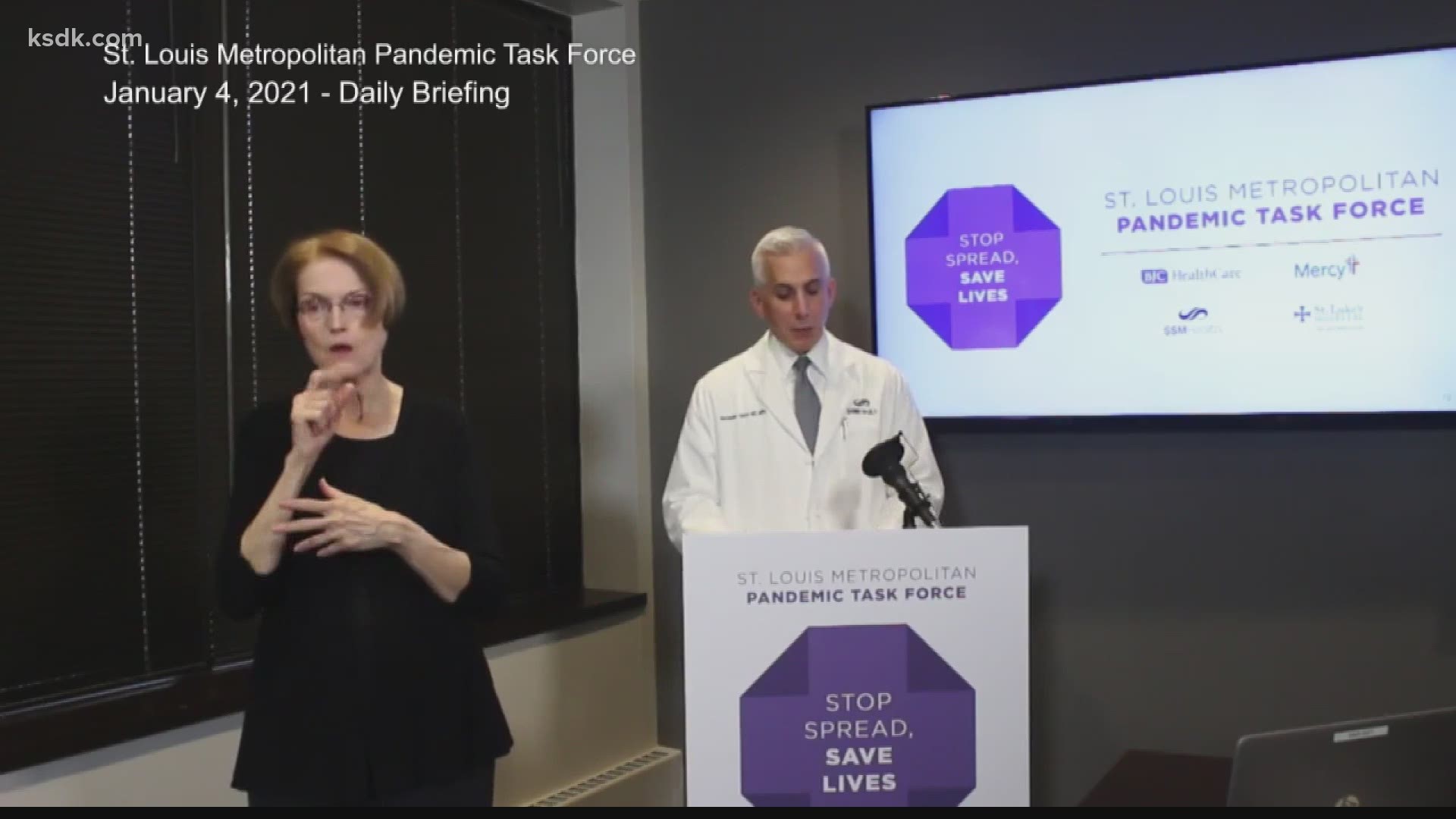 ST. LOUIS — The leader of the St. Louis Metropolitan Pandemic Task Force said the region has seen improving coronavirus numbers in recent days, but numbers are still too high. He also said other variables have the task force concerned about the near future.

Dr. Alex Garza, the incident commander of the task force, described the numbers reported in the last few weeks as "soft" because they were still waiting to see if the decrease in newly confirmed cases in the area was due to a decrease in testing during the holidays or showed a real slowing of the spread of the virus in the community. Even with the decrease in cases, Dr. Garza said the number of sick people in area hospitals is too high.

"At any rate, the numbers are still way too high," he said. "Any time that we have over 800 patients in our hospitals with COVID, the number is just much too high and any time we're still reporting more than 100 admissions a day, still, those numbers are much too high."

On Monday, the task force reported 836 hospitalizations and 107 new admissions, a single-day increase in both numbers. Both of those numbers were down slightly from this time last week.

In addition to monitoring testing rates, the task force is keeping an eye on the so-called U.K. variant of the coronavirus. As of Monday, the new variant of SARS-CoV2 has been found in three states: Colorado, California and Florida. Scientists are still working to confirm whether the variant spreads more easily, but they are finding some evidence that it does.

Local health leaders say no cases of the new variant have been confirmed in our area, but Dr. Garza it is only a matter of time before it is found.

"It has only been discovered in a couple of places but that's mostly because there hasn't been a lot of genomic discovery of the virus," he said. "And so, it will make it here sooner or later, there's no doubt about that, the question is when and what happens after that."

Dr. Garza said someone sick with the new strain of COVID-19 will still test positive with the current tests, but samples would have to be tested further to determine what variant of the virus it is.

Even when the new strain is discovered, Dr. Garza said the strategies people need to follow to stay safe will not change.

"Regardless of if it is the current SARS-CoV2 or the U.K. variant, it doesn't really change the approach," he said. "The approach is still going to be: wear a mask, social distance, don't gather in crowds, all of those things we would be doing otherwise. Where it becomes important is if we know that we have this circulating, what does that do to our potential planning for the number of cases that we're going to see."

The following data are the combined figures from the four major health systems (BJC HealthCare, Mercy, SSM Health, St. Luke’s Hospital) that are part of the task force, for January 4.