"I want to make it clear that a mask mandate remains in place in St. Louis County," Page said at his Wednesday briefing 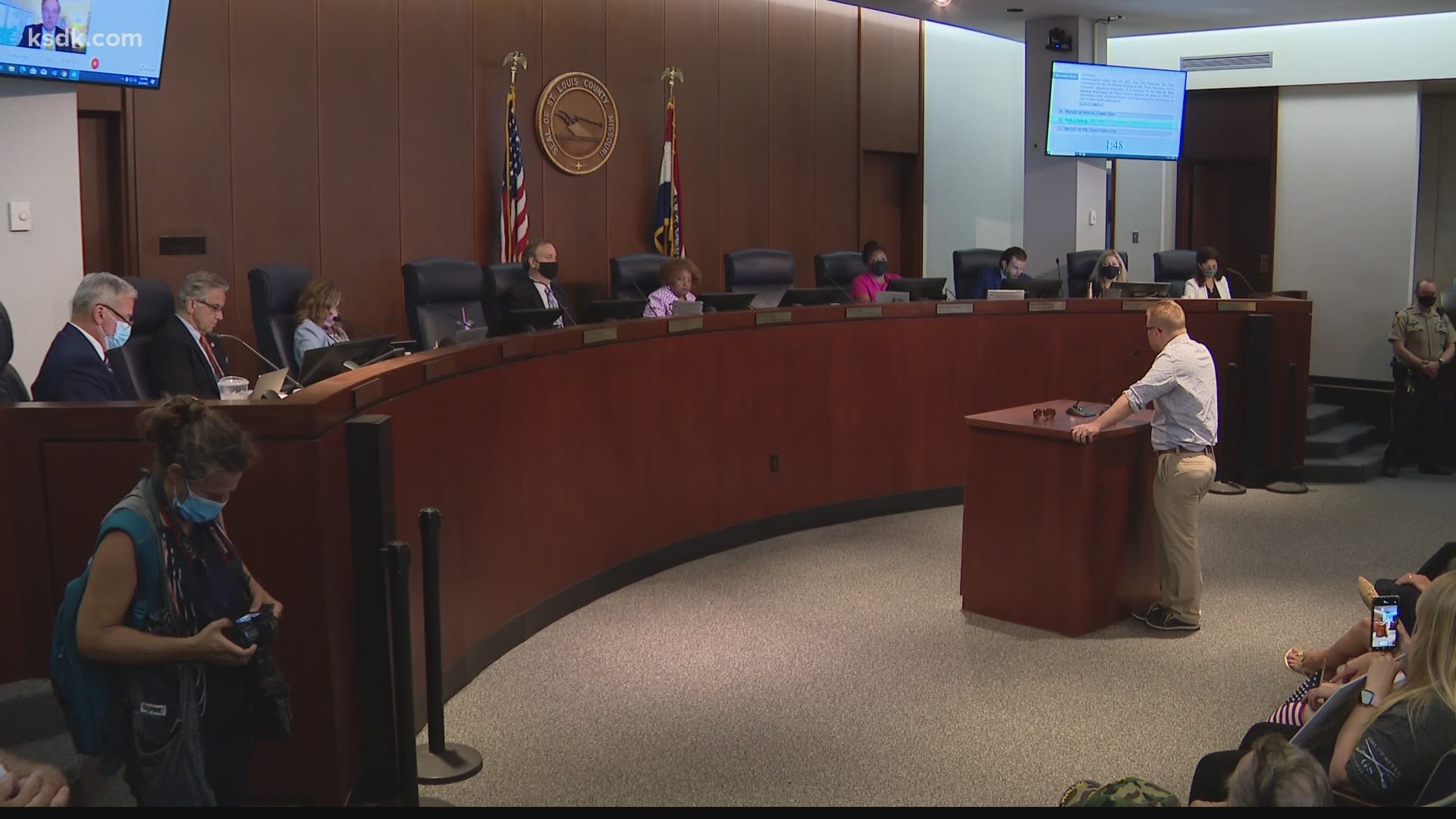 ST. LOUIS COUNTY, Mo. — St. Louis County Executive Sam Page said the mask mandate in the county will remain in place, despite the County Council voting to terminate the mandate.

The council voted 5-2 to strike down the mask mandate after hours of public feedback Tuesday night. Most of the council members were taking issue with the fact that Page did not consult the council before putting the order in place.

After the vote Tuesday night, St. Louis County Executive Sam Page held a briefing on Wednesday where he said the mask mandate would stay in effect.

“I want to make it clear that a mask mandate remains in place in St. Louis County,” Page said. “There is currently a lawsuit challenging that mandate, until that’s resolved, masks are required in all indoor public spaces.”

Page went on to explain the reasons why the mask mandate was put in place to begin with. He mentioned the rise in COVID-19 cases and positivity rate in the county and said when they lifted health protocols in May, they thought more people would be vaccinated by now.

"The virus is simply spreading faster than we are getting people vaccinated,” Page said. “Masks slow down the spread while we continue our aggressive efforts to make the vaccine available for everyone."

In support of the mask mandate, St. Louis County Councilwoman Lisa Clancy on Wednesday said she plans to introduce a mask order at the next meeting. She cited her colleagues' objection to the process of how this latest mandate came to be.

"I believe my colleagues when they say that they objected to the process, and not the content, of the mask order. For that reason, I will be introducing a mask order at the next Council meeting," Clancy said. "I trust that with the politics aside, we will be able to work together to protect your health. That is, after all, what you elected us to do.”

As with previous disputes about health orders during the pandemic, the final result is likely to come in court. If it does result in a court battle, a judge could issue a temporary injunction to invalidate the mandate while the court battle plays out, or could leave the mandate in place until a decision is made.

Health orders in St. Louis County were upheld after multiple legal challenges last year, but state legislators passed a new bill limiting the power of local leaders when it comes to health restrictions.

According to a release, House Bill 271 says "political subdivisions may only issue public health orders that directly or indirectly restrict access to businesses, churches, schools or other places of assembly for 30 calendar days in a 180-day period when the governor has declared a state of emergency."

The bill says those orders can be extended more than once with a majority vote by the local governing body.

Page's office contends that the mask mandate does not restrict access to businesses, churches, schools or other places of assembly.