Only Indiana, Ohio and Illinois say they still actively use cast-iron road reflectors. The other six states have either phased them out over the last three years, or have plans to do so. 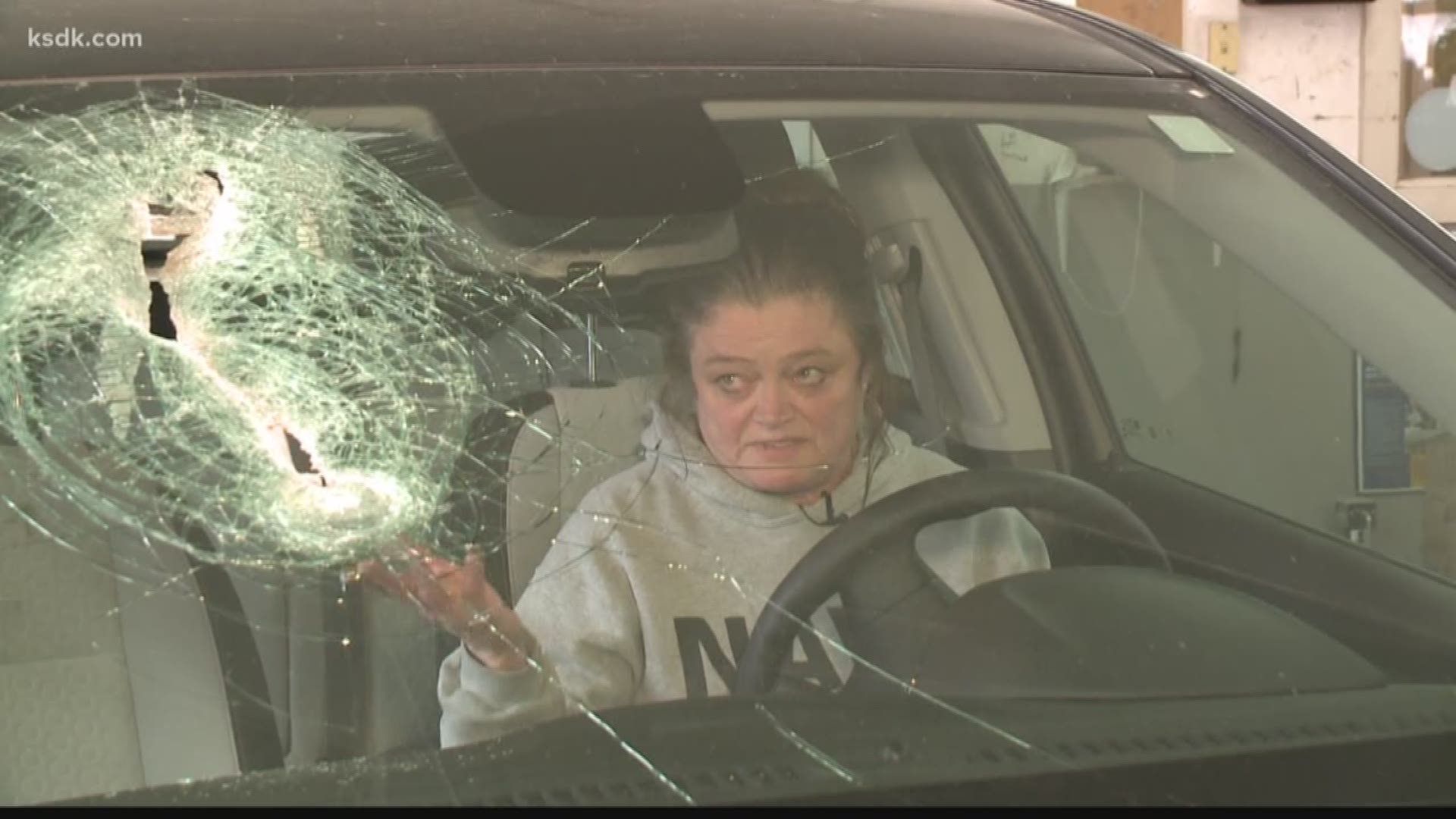 It was so quick, Sheri Keleman said she didn't even have time to think.

"I heard fizzing, which was apparently the air coming through the glass," said Keleman.

She was driving her granddaughter to dance practice when, like a missile, something broke through the windshield and punctured her thankfully empty passenger seat with Sheri's 6-year-old granddaughter in the backseat.

"This shouldn’t have happened," said a tearful Sheri.

Remarkably, no one was injured, but Sheri's husband James can't stop thinking what might have been.

"It impaled the seat, anybody sitting here, there’s no odds of survival," James said.

This specific style is designed to withstand snow plows as they scrape across the ground, but Sheri believes it's that sheer strength that could make them dangerous.

"They have to do something before it kills somebody," she said.

Dr. Jill Bernard Bracy is the Acting Director of Program Development for the Center for Transportation Studies at the University of Missouri – St. Louis

"It can become dislodged especially if you have something like a blade of a snowplow going over it time and time again and then you add weather to it as a factor," Bernard Bracy said.

Just cross the Mississippi River and you'll find that Missouri is one of many states who have already discontinued using raised pavement markers or RPMS.

MoDOT made the change ten years ago. They said the main reason was the snowplow-able RPMs weren't staying in place.

A spokesperson for MoDOT said in part, "It became clear that it was going to take significant efforts to keep these markers in place for the life of the asphalt."

Missouri isn't the only state with that stance.

According to a Massachusetts Department of Transportation study, only nine states still used RPMs back in 2016.

5 On Your Side reached out to all nine states. All of them responded, except Virginia.

Only Indiana, Ohio and Illinois say they still actively use RPMs. The other six states have either phased them out over the last three years or have plans to do so.

Bernard Bracy said Illinois, Ohio and Indiana should merge with the others.

"So why would I have a physical barrier that can become debris in the road when I don’t need it? When I can serve both purposes with something else," said Bernard Bracy.

That Massachusetts study takes it a step further saying, "Some studies have suggested that under certain conditions, the applications of such markers may cause an increase in accidents."

Along with safety concerns, Bernard Bracy argues that raised reflectors are just no longer effective.

"Now instead of people paying as much attention as they used to, we have a lot more distracted driving. Texting for example. When you’re texting you’re looking down, so that little marker isn’t going to catch your attention and help you stay in the lane," she said.

"Either completely flat into the pavement or markers that are more like reflective tape and then moving to things even past those type of visual indicators to rumble strips for example," said Bernard Bracy.

An engineer at IDOT sees it differently.

"We’re very fortunate that someone wasn’t in the front seat. We’re not trying to minimize that at all but what we’re looking at, in 40 years, in every rainstorm, in every snowstorm in every situation of low light for whatever reason -- that provides a benefit to the motoring public, each and every time," said Joseph Monroe, IDOT District 8 Engineer.

That being said, Illinois has commissioned a transportation advisory group to study potential alternatives.

"There are tapes and other aspects out there but they just don’t seem to have the same pop in those low light, inclement weather conditions," said Monroe. "At this moment, I don’t anticipate we’d move away from them."

We asked Monroe if he stands by the safety of those raised pavement markers.

"Absolutely, that’s why we commissioned the study. We want to make sure we’re providing that additional visual point of reference to the motoring public," he said.

Keleman said she just keeps going back to what might have been.

She doesn't understand why they're still on the road — and for as long as they still are — she said it will be hard for her to even drive.

"I said the other day to my husband, if one more thing flies up in the middle of the road, it’s like a jerk reaction," Sheri said.

Because she knows better than anyone how quickly everything can change.

"We were so unbelievably lucky. Someone’s not going to be so lucky — and it’s just a matter of time, it really is," Sheri warned.

Now it should be noted, crashes involving loose road reflectors are considered rare. However, just a few days after the Keleman's crash, Sheri's husband found six loose reflectors along the side of I-64 in just one afternoon.

IDOT said they aren't surprised by that considering the winter we had.

IDOT insists they do all they can to make sure loose reflectors are picked up when they notice them and urge you to call their office if you see any yourself.