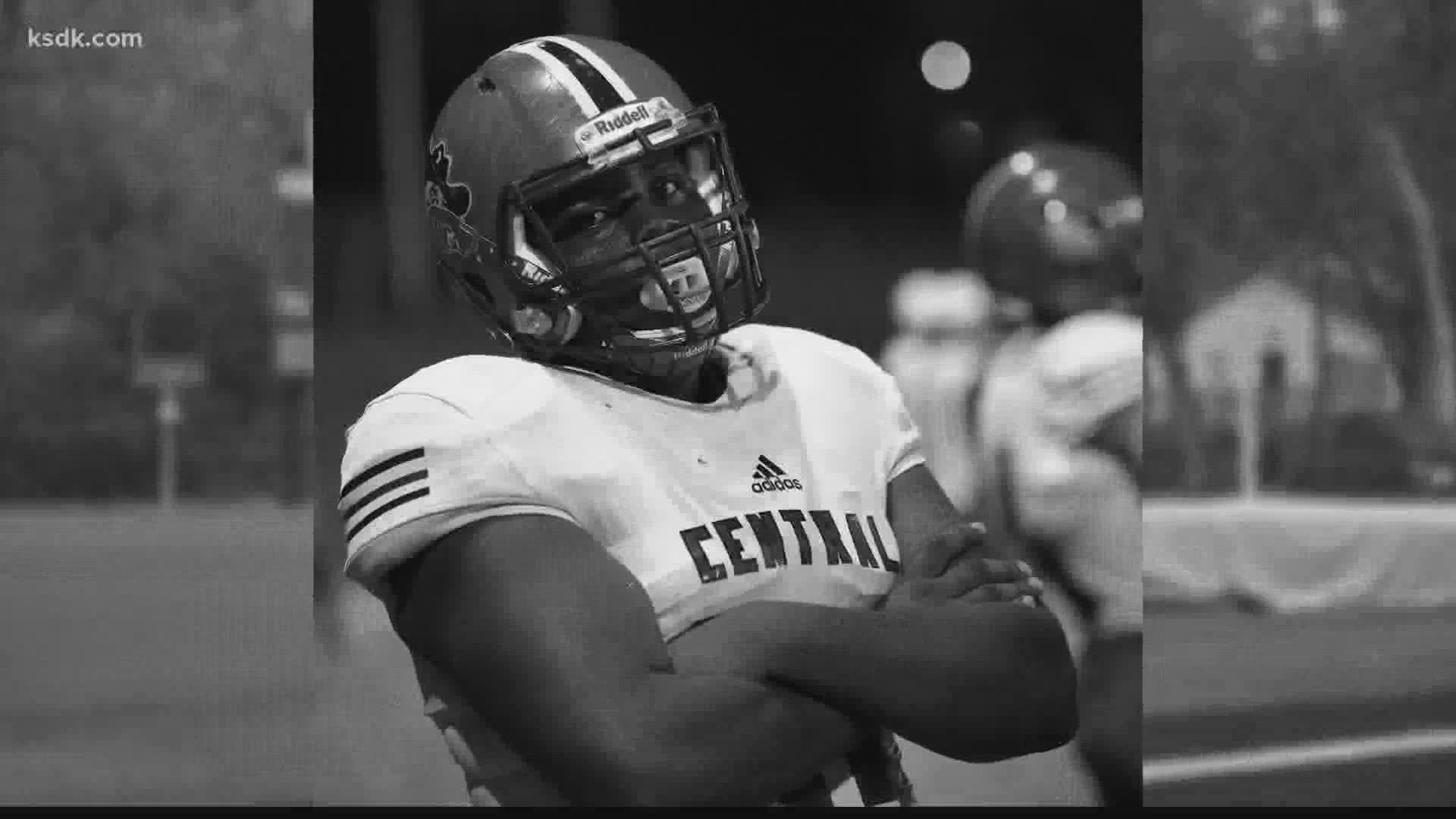 MADISON COUNTY, Mo. — It took a jury about two hours to determine Derontae Martin's death was no suicide.

They met in Madison County's only courtroom Friday as part of a coroner's inquest and listened as witnesses and experts laid out the evidence in the case. It's a process rarely seen in Missouri outside of rural communities.

"I am so glad and happy that they saw through all their lies and they saw the truth, that my baby did not kill himself," said Erica Lotts, Derontae's mother.

A total of 26 witnesses were called, but only about a dozen testified. At least three didn't show up.

Three Missouri Highway Patrol troopers testified that they believed the death was a suicide.

Madison County Prosecutor M. Dwight Robbins said he likes to ask Coroner Collin Follis to call an inquest if ever there is "uncertainty about a death."

Robbins asked the witnesses questions and declined to comment following the proceeding saying it's an open investigation.

It's a proceeding that happens in counties that do not have medical examiners.

The jury of six, which included one Black man, a white man and four white women, had to determine whether the death was a suicide, accidental, from natural causes or by violence.

Their decision Friday means investigators from the Madison County Sheriff's Department and Missouri State Highway Patrol must go back to the drawing board and determine who is responsible for Martin's death.

Madison County Coroner Colin Follis watched as statements from the sheriff's office and a coroner's report, which were both shown on a television screen during the inquest, both indicated the official position that Martin's death on April 25 was a suicide.

After two hours of testimony and two hours of deliberation, the jury chose the "by violence" option. Jurors left without wanting to comment.

The death of Derontae Martin has sparked controversy far outside Fredericktown and Madison County.

The circumstances surrounding the Black man's death in a majority white community, at the home of a man who proudly displays a Confederate flag, led to additional scrutiny.

During the inquest, about a half dozen protesters stood with signs in the courthouse square below and shouted, sometimes loud enough that they could be heard inside the courtroom.

After the inquest, Martin's mother and grandmother tearfully embraced outside the courtroom and praised God.

Officials in the courtroom including Follis, Robbins and Sheriff Katy McCutcheon declined to comment on the proceedings or why the county decided to proceed with an inquest.

Robbins called forensic pathologist Dr. Russell Deidiker to the stand first. He described Martin's autopsy as photos of Martin's injuries showed on the courtroom's television screen. Several of the witnesses in the gallery, including five of the people who were at the party on the night of the shooting gasped and looked away.

Deidiker said the gunshot wound originated from a pistol "less than an inch" from Martin's head, due to the presence of soot around the wound.

When Robbins asked Deidiker about findings from an independent autopsy requested by Martin's family, which differed on the distance of the gun from Martin's head due to the absence of markings or soot, Deidiker said the soot would have been cleaned from Martin's body during the embalming process.

Lotts said her son's body was embalmed without her permission.

Deidiker added that a toxicology screening found a "significant level" of methamphetamine in Martin's blood -- a drug his mother said he did not do.

Just days before his death, Martin had surgery on his right hand and there were not drugs detected in his system during that procedure, his mother said.

A 911 dispatcher, two paramedics and a representative of the Madison County Fire District testified about the difficulty of removing Martin's body from the attic space where they found him.

They described it as an unfinished space where the only secure footing was on ceiling joists, full of "junk," "cramped and dark."

A deputy sheriff testified that James Wade, the owner of the house where Martin died, met him on the scene and guided him to Martin's body. He said that he located a pistol immediately beside Martin's head, in a pool of blood.

But there were no pictures showing where Madison County Deputy Nick Adams found the gun. He said he found it just to the left of Martin's head and moved it to his patrol car to secure it because he had not searched the house to determine whether anyone else could be armed.

Adams said he interviewed several people on the scene. Some of those witnesses testified at the inquest with similar recollections of where they saw Martin, what he did during the night and what happened just before his death.

Zack Graham said another man at the party gave Martin a gun because Martin was acting paranoid and saying he did not feel safe. The pathologist said someone with the amount of methamphetamine in his system could act paranoid and irrationally.

Graham said he ran past a closet door that lead to an unfinished space used for storage in the attic where he found Martin sitting with a gun. His leg bounced as he spoke, and Robbins had to ask him to speak up several times.

"Did you see Derontae Martin shoot himself?" Robbins asked.

Three members of the Missouri State Highway Patrol's Division of Drug and Crime Control also testified, verifying that the statements the witnesses gave during the inquest matched what they told them during the investigation.

Robbins asked him whether he believed anyone else could have been in the cramped attic space where Derontae was found. Stoetling said he didn't believe so because it looked like the objects in the room hadn't been moved for years and there was dust along the duct work near him.

The investigator also noted crime scene photos showed a drop of blood on Martin's leg. He said the trajectory of how the drop of blood traveled down his leg indicated Martin had to be sitting with his legs crossed when he shot himself.

Martin was found on his back with his legs stretched out in front of him, with one of them propped on top of what looked to be a griddle and his other leg resting somewhat bent at the knee against some duct work.

Stoetling told the court, "For a suicide investigation, it was very thorough."

Immediately after that statement, Martin's grandmother shouted, "Bullshit," and walked out the courtroom.

A new detail in the case not previously known to the public is Missouri State Highway Patrol officers followed up on a lead from a man who said that James Wade approached him in a Walmart several days after Martin died and asked for "back up" because he expected protesters to arrive at his home.

That man told the court that he asked if Wade killed Martin, and that Wade said that he did, using racial slurs.

According to a recording of the interview highway patrol investigators conducted with Wade after speaking with that tipster, Wade told them that what he really said was, "I probably could have shot him and gotten less heat from his people than what I got now from trying to help the guy." He later reiterated that for the court in the inquest.

Another theory about the killing was brought up and shot down. Morgan Reeder told the court her brother believes Graham -- the last person to see Martin alive -- shot Martin because Martin told police another man was involved in an unrelated shooting weeks before and was "a snitch."

Robbins asked if there was any evidence to support that theory, and she said there wasn't.

Madison Wathen was among the half dozen protesters who joined Lotts and Robinson outside the courthouse Friday carrying "Justice for Derontae Martin" signs. She said she grew up in Fredericktown and has concerns about this case being "covered up."

She was pleased with Friday's verdict, but added: "I think it's a start, but there's a lot further we have to go in this. We've got to figure out what really happened, and why it happened."

Just before leaving to return to her home in Ferguson, Lotts realized 96 days had passed since her son's death.