People are reporting peeping drones all across the country, including in our area. But what can you do if a drone is peering into your personal life? 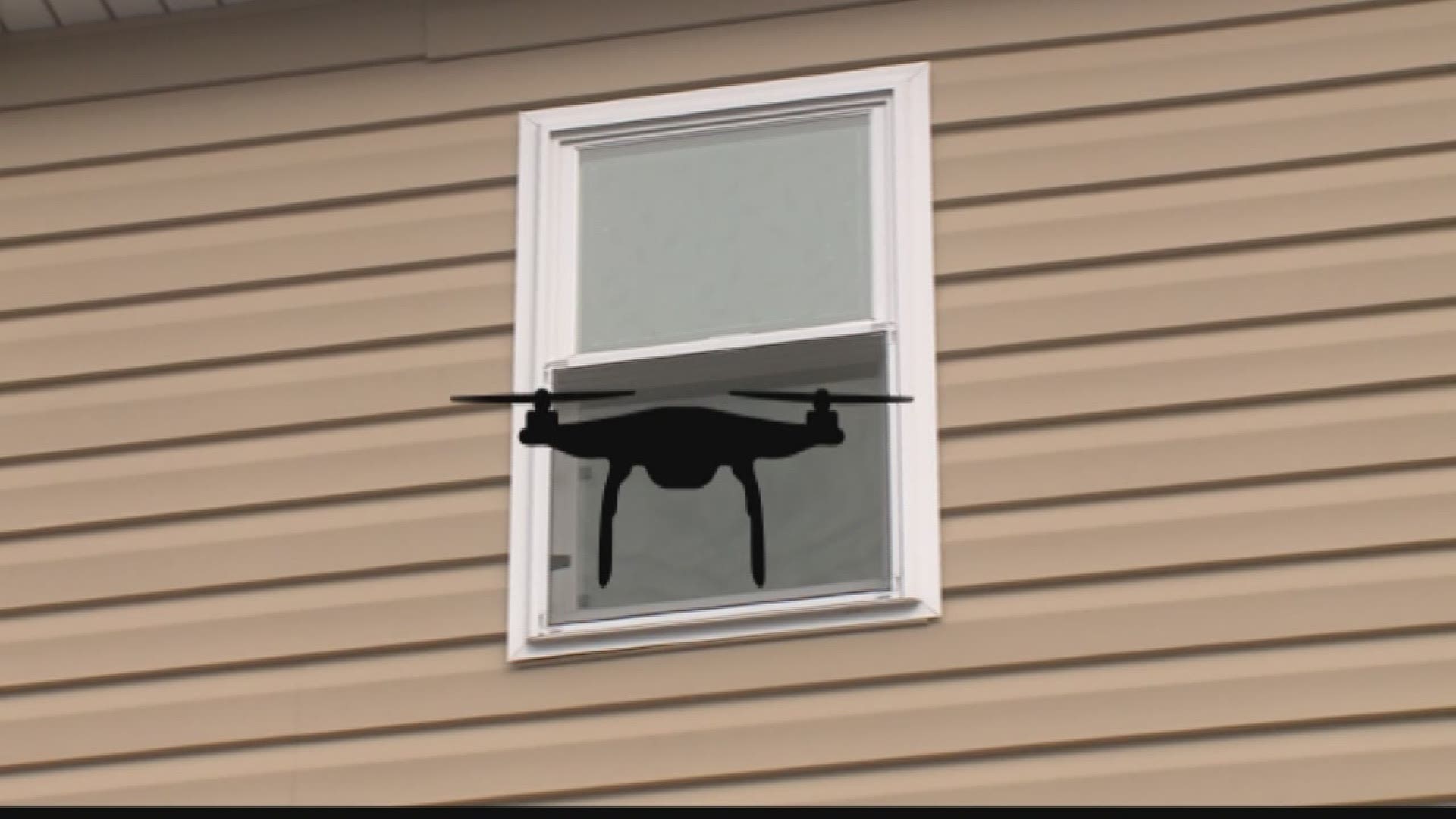 ST. LOUIS - Drone technology is moving fast, even faster than residents can rush to the window to lower the blinds.

Some St. Louis residents have seen small hobby drones outside their homes and over their backyards. They’re also discovering how little they can do to protect their privacy from airborne voyeurs.

Lorena Veresh learned to watch the skies after a scary sighting through her daughters’ bathroom window.

“They were doing their hair and heard a weird noise,” she said.

The source of the low, buzzing sound was a drone, hovering at the second-floor window.

“It hovered out there for a good little bit,” Veresh said. “Who flies a drone at 9 o'clock at night, peaking into a small window?”

Seeing that drone changed the way she felt in her own neighborhood.

Her neighbors told 5 On Your Side about similar encounters: someone flying a drone close enough to their homes and windows to possibly see inside.

Veresh reported the sighting to the police. She said they never showed up. Residents don’t yet know who was flying the drone, or why.

People are reporting peeping drones all across the country. In 2016 a man in Orem, Utah, saw a drone flying outside his bathroom window and over his house. He chased it down with his car and reviewed the photos in its storage. He found videos of people in their apartments, recorded through their windows and right into their bedrooms.

The police used that footage to identify the drone’s owner, 40-year-old Aaron Foote. He pleaded no contest to voyeurism by electronic equipment.

Foote’s drone was especially sneaky because he had covered its safety lights with tape. Private investigator Mike Barbieri said that voyeurs have several tricks to go undetected.

“They'll camouflage them all. They can also make them quieter,” he said.

His own clients have reported plenty of problems with peeping drones: “You could be in the backyard in a hot tub with your wife and the drone could be taping you.”

Police admit that victims of drone spying have few resources to catch the pilot or protect their privacy.

“There's not a law that prevents that at this time,” said Lt. Tom Wilkinson of the St. Charles City Police. “We can't cite them for a violation. We can simply ask them for consideration to their neighbors and businesses and privacy.”

At the time, the drone pilot claimed to be capturing footage for the St. Charles Visitor’s Center. The Center told police that they had not hired anyone to shoot video at that time.

The pilot also claimed to be working for a YouTube channel called Drone U. The owners of Drone U told 5 On Your Side that they’d never heard of him before.

So why was the operator flying a drone over the police department, under cover of darkness, twice last year? Police couldn’t say. When the I-Team contacted the drone pilot directly, he didn’t offer an explanation.

It may have been the same reason that a pilot had for flying a drone around the St. Louis County Jail at night, as concerned onlookers reported to Clayton police in 2015.

Veresh said that this new dimension of privacy will stick with her.

“It's given me something to think about to talk with my own children and my students, about what they should do if they see one, and also that if they see one, it's not ok for it to be looking in your windows,” she said.

If you see a drone flying over your property, you may report it to the police. Contrary to popular belief, you cannot shoot a drone just because it’s in your airspace. Police say you could be charged with destruction of property. Barbieri gave the I-Team’s PJ Randhawa some advice on what to do if you see a drone come too close for comfort. 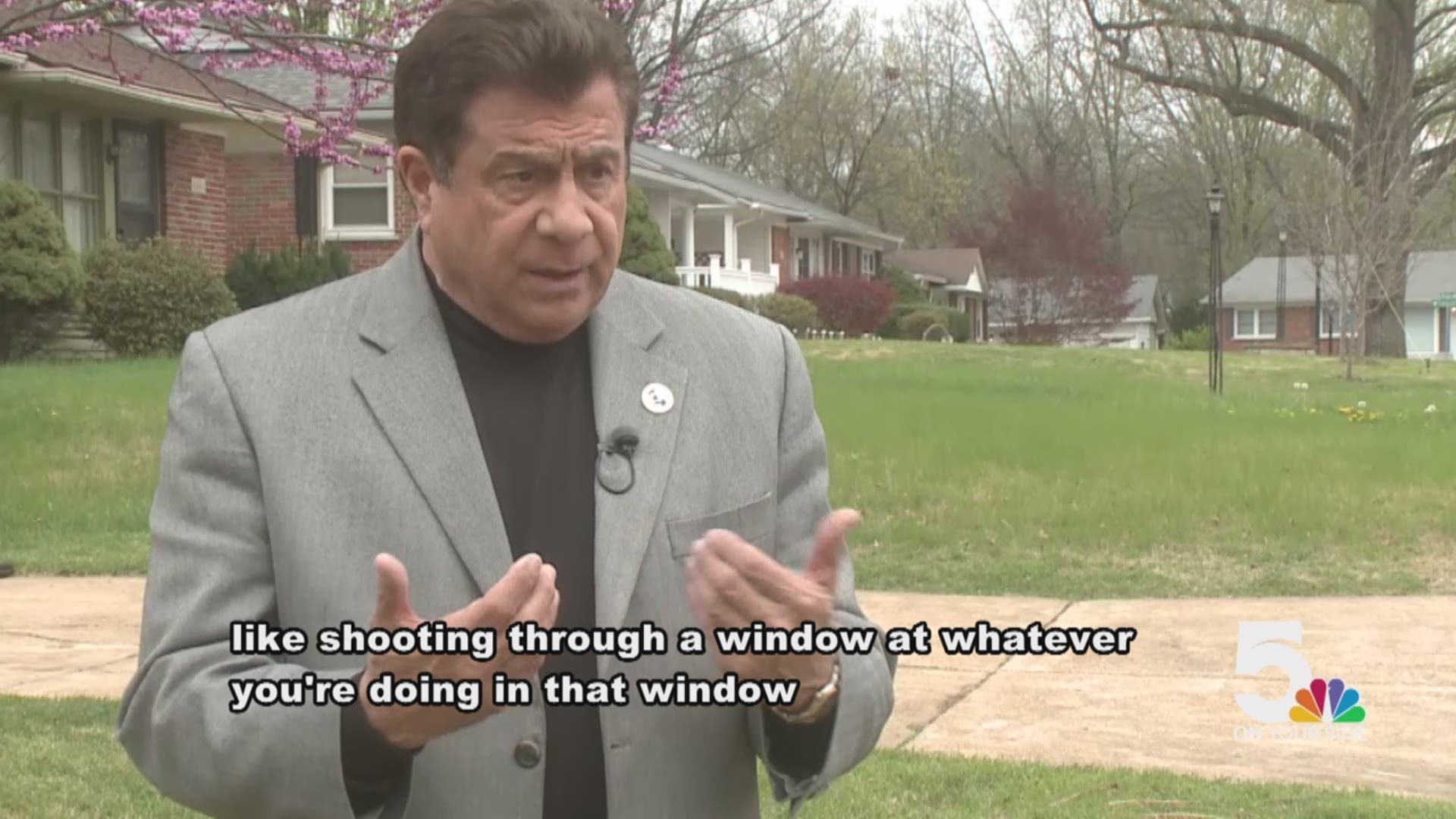 In general, the Federal Aviation Administration requires hobby drones stay below 400 feet and steer clear of other aircraft and airports. A hobby drone can weight up to 55 pounds and may only fly during daylight hours. The operator must keep the drone in sight at all times. Visit the FAA website to learn more about the rules for flying a drone.

In some municipalities, city councils passed ordinances that regulate drone use and the potential to invade someone’s privacy. If you live in any of these cities, invading privacy with a drone can be a criminal offense.