Dustin Boone, Bailey Colletta, Randy Hays and Christopher Myers were indicted in the U.S. District Court for the Eastern District of Missouri on Thursday. 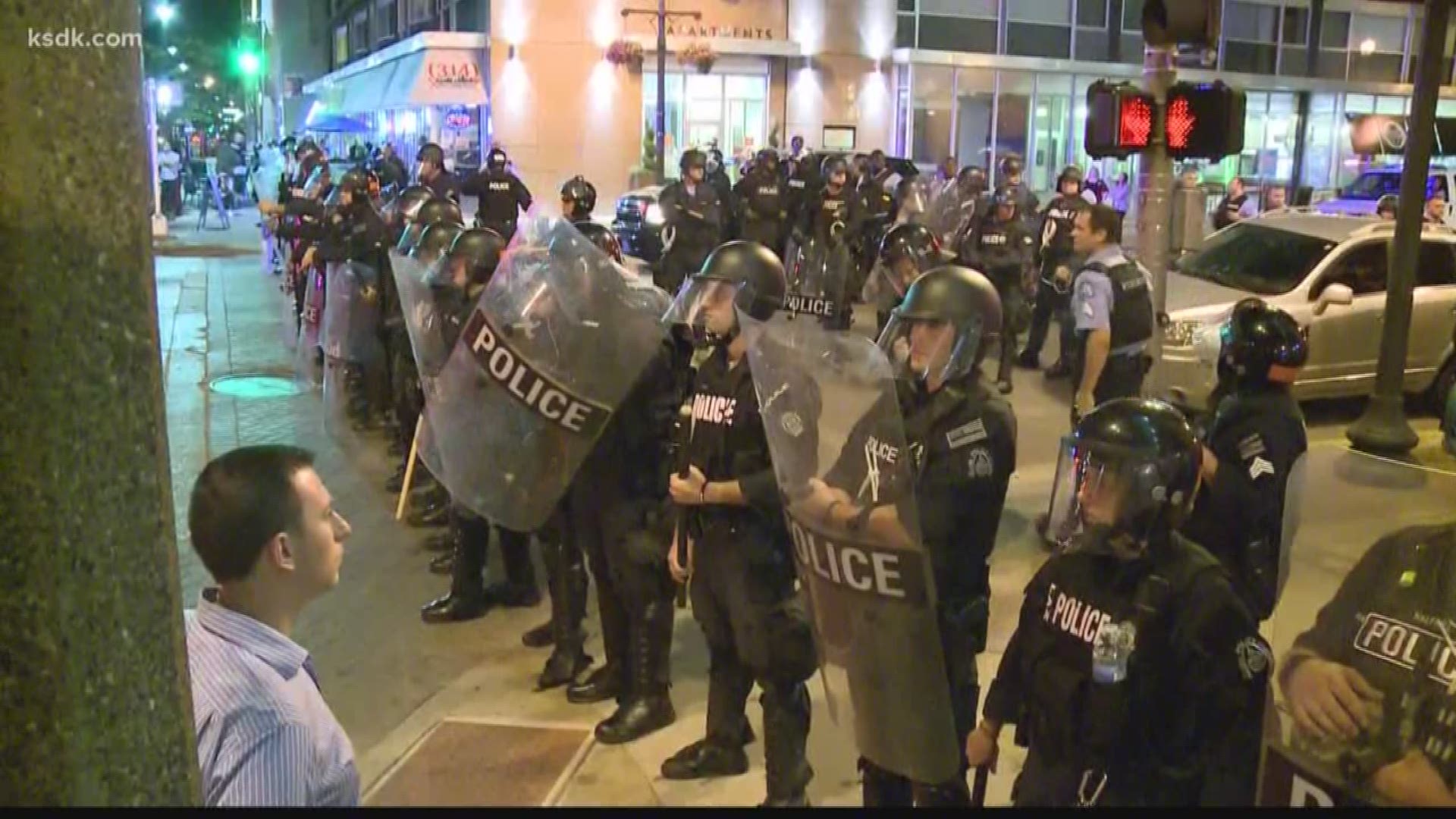 ST. LOUIS – Four St. Louis Metropolitan police officers were indicted on federal charges and suspended from the department without pay on Thursday.

Dustin Boone, Bailey Colletta, Randy Hays and Christopher Myers were indicted in the U.S. District Court for the Eastern District of Missouri.

Charges include, suspicion of lying to the FBI and the use of excessive force related to the assault of an undercover St. Louis police officer during a 2017 protest following the Jason Stockley court ruling.

The victim, a 22-year veteran St. Louis Metropolitan police officer was working during the protests but was doing so in an undercover capacity to record and document criminal activity so other officers could lawfully arrest individuals who were committing crimes.

Count one of the indictment specifically alleges that Boone, Hays and Myers violated the undercover officer's constitutional rights when they used unreasonable force on him. Their actions resulted in bodily injury and included the use of a dangerous weapon. It also alleges they threw the undercover officer to the ground and kicked him while he was compliant and not posing a physical threat to anyone.

Count two charges Boone, Hays and Myers with conspiracy to obstruct justice for conspiring and agreeing to engage in misleading conduct toward witnesses to prevent information about their criminal conduct from reaching federal authorities.

Count three of the indictment also charges Myers with destruction of evidence for knowingly destroying and mutilating the undercover officer's cell phone with the intent to impede, obstruct, and influence the investigation into the arrest and assault of him.

Count four charges Colletta with corruptly attempting to obstruct, influence, and impede federal grand jury proceedings by engaging in a series of misleading assertions and false statements when she testified before the grand jury.

"Law enforcement officers have an important duty to protect the members of the communities they serve and to enforce the law," said Assistant Attorney General Eric Dreiband. "The Justice Department will continue to investigate and prosecute matters involving allegations of federal criminal civil rights violations."

"These are serious charges and the vigorous enforcement of civil rights is essential to maintaining public trust in law enforcement," said U.S. Attorney Jeff Jensen. "The SLMPD recognized the importance of this investigation and its leadership has cooperated at every turn. I continue to have great confidence in the brave and honorable men and women of the SLMPD, Chief John Hayden, and Public Safety Director Judge Jimmie Edwards."

"I wish to commend SLMPD leadership for its cooperation and the support of this investigation. Law enforcement and the public have a common interest in identifying and holding accountable those who dishonor the badge," said Special Agent in Charge Richard Quinn of the FBI St. Louis Division. "To that end, I am encouraging people to contact the FBI if you are a witness in this case."

Jimmie Edwards announced the four officers were suspended immediately without pay on Thursday.

"The St. Louis Metropolitan Police Department is filled with dedicated and professional public servants who do exceptional work, and I am proud of them," Edwards said. "In a few instances, some officers have fallen short of the professionalism required to work in our Police Department," Edwards continued. "I take accountability and transparency very seriously. When a public safety employee acts outside the scope of their authority, it is imperative that they be held accountable to the fullest extent under the law."

"I believe officers Boone, Colletta, Hayes, and Myers are outliers and that the charges levied against them are isolated and not indicative of our Police Department," Edwards said.

The investigation that led to charges against these officers was conducted by the FBI at the request of the St. Louis Metropolitan Police Department.

The four officers had indictment read in federal court Friday morning. They turned themselves in. They were in street clothes and shackled at their wrists and hands. The court recommended $25,000 bond for each of the officers, but pre-trial lawyers said no. All four were released on their own recognizance. They’ll be back in court on Dec. 6.

A federal investigation was initiated, and our Department was fully cooperative. That investigation culminated this week with the announcement of indictments of those involved (listed below), who have been placed on administrative leave without pay.

I am deeply disappointed in the alleged actions of these individual officers; however, it is in no way reflective of the hard work and dedication exhibited by the men and women of our Department who serve the community on a daily basis with integrity and honor.

Our officers must be held to the highest standard of professionalism, and I expect them to abide by the very same laws they are sworn to uphold, as they have an ethical obligation to the citizens of this community. I want to ensure the community that this Department will continue to be open, honest, and transparent in our commitment to make the City of St. Louis a safer place for all to live, work, and visit.

We expect professionalism from every City employee. No exceptions. The charges brought against these officers today do not reflect the standards we hold ourselves to as public servants.

Today's charges support what we and our clients have known for months about how SLMPD officers conducted themselves during the Stockley protests. It is obvious from the officers' own words that they fully intended to, and did, brutalize people who were doing nothing more than exercising their constitutional rights. There is no reason to believe that it was only these four officers engaged in such misconduct, and it is unfathomable that a single undercover officer was the only victim. We represent clients who were also violently attacked, who also suffered, and who also demand justice for that suffering. We fully expect to see more indictments representing many more victims who survived this state violence and police abuse just over a year ago.

WARNING: Some may find the language of this document disturbing -

Click here if you can't see the document below (Indictment)

WARNING: Some may find the language of this document disturbing -

According to the federal indictment, three of the police officers expressed excitement about using unjustified force.