The stories are countless and the details are shocking. 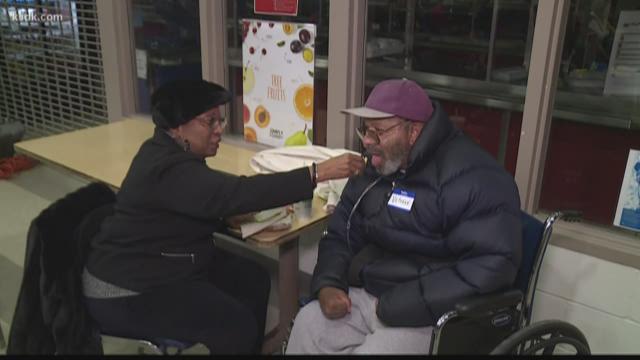 Local families gathered to fight for veterans who are now too old or weak to fight for themselves. They said the vets are neglected and abused at the St. Louis Veteran's Home in North County.

Imagine an elderly loved one being neglected for hours, scalded with hot water and unable to even feed themselves with no end in sight. That's how veterans and their families described the conditions inside the St Louis veterans home.

"I'd rather come home and die at home than be at the home. Because of the treatment that I get there," said
Curtis Washington Sr., a veteran who currently lives in St. Louis veterans home in north St. Louis County.

"He was afraid, and he was so scared he never talked. He didn't deserve another veteran coming up and clawing his face and breaking his face open to where it bled," said Guzdial, who's husband passed away earlier this year.

And like Guzdial, Jim Luebbert said he saw his late father deteriorate quickly after entering the home.

"His shirt hasn't been changed for two days in this picture. Those bruises, he had four falls there," said Luebbert, holding up photos of his late father sitting in a wheelchair in his final days.

The stories are countless and the details are shocking.

"I saw one patient that had not been changed for four hours. And I was there all day, I knew what was going on," said Guzdial.

A crowd of family, friends, even current residents of the home say the home's management is to blame for the pattern of abuse and neglect that has been documented over the past year.

The Missouri veterans commission tells us they've been aware of these complaints since July, and even launched an investigation. As a result, new protocols have been put in place. Including:

But Washington said those changes don't change his reality. Or solve the issues of neglect and cruelty he and other veterans face daily

"We need help, we need somebody that cares about us. And that's what we don't have," said Washington.

The Deputy Director of the Missouri Veterans Commission sent us a statement saying many individuals who complained "had a racist agenda that they wanted to accomplish."

The families we spoke to say, that argument doesn't hold any water because they are a multicultural group themselves.

The full statement from Brian Hunt, Deputy Director of the Missouri Veterans Commission is as follows:

This statement is my own and reflects my opinion on the situation in the STL Veterans Home referred to in recent news articles over this last weekend.

As you know, last July we became aware of a packet of information that contained various complaints from a group of family members at the STL home. There was also involvement from individuals from the community that were not residents or family members of the home.

You are already aware our thorough investigation and findings. Since that time the facility has had an unannounced annual regulatory survey conducted by the US Dept. of Veterans Affairs which resulted in a deficiency free survey that I feel validated our team’s earlier comprehensive investigation.

I am not saying that all of the concerns and complaints were without merit but it is definitely my opinion that there was an agenda present to replace the administrator of the STL Veterans Home because of race. I was present during several of the face to face meetings with individuals involved with this and I believe there was a common theme of racism involved from the beginning.

First, I refer to the written information we received that contained varies allegations, complaints, and commentary. There are numerous references questioning the administrator’s qualifications and many disparaging comments about the administrator and his staff who are predominately African American. It is important to note that Rolando Carter is the first African American lead administrator that I am aware of in the Commission. These outside community individuals were holding meetings with Veterans and family members for over a month before our administrator became aware of it. The written report referred to “employee lazing” and “paycheck only employees.” The report refers to other VA homes in smaller population areas that “ do not have the same problems unique to St. Louis.” These homes have a “friendly family/neighbor attitude in their nursing homes.” Another quote…. “Unfortunately the STL Home is located in an area where the young people could care less about the job but just the money. They don’t have the proper attitude for the demanding jobs at the home. It’s just a means to an end to get their nails done, a new bleach job, or tattoo.” These are an example but not a complete list of what I consider inappropriate remarks to say the least.

From the very first meeting we had we were told that if we replaced the administrator that “this would all go away.” At our first meeting we were handed a list of recommended changes. First on the list was “Change the leadership of the home.” The second recommendation was “Hire a good Director of Nursing. The last one was good and she would come back if asked.” Our current DON is African American and the one they want brought back is white. In other meetings there were other remarks verbalized regarding the home’s staff and their work ethic and appearance. In my opinion some of them were racist in nature.

We have been told repeatedly that if we change the administrator of the home that this all goes away. In my opinion a few family complaints are being used to try and push an agenda that is racist. In a story that was in the Jefferson City Tribune Sunday, October 29th, the comment was made “the other homes are in smaller locations where the staff are more likely to treat the Veterans as family.”

The STL home isn’t perfect and we do not provide perfect care anywhere and we are always looking for ways to improve and get better. But for the most part the STL home has good clinical outcomes and just received a deficiency free survey from our regulatory authority. Rolando Carter was barely there a year before these individuals started demanding that he be replaced. WHY??? Because of his race? I am NOT compatible with that.

“These allegations are deeply disturbing. We will continue to demand the best for our veterans, and we will hold accountable those responsible for their care.

I saw too many of my friends return from combat and get mistreated by the VA. The dysfunction at the VA is one of the reasons I got involved in politics. I've seen proud and strong warriors wait months for access to the care they need. I've seen the bureaucracy give their families the run around. I've seen this pain with my own two eyes.

When we first heard about these allegations in July, I was clear with the Missouri Veterans Commission: Missouri's veterans deserve nothing but the best, and it is the Commission's job—and our job—to ensure that they receive the care and respect that they have earned. These veterans fought for us, and I will fight for them.

In order to ensure that every veteran—and every veteran’s family— has confidence in their care, I have directed the Department of Public Safety to initiate an additional full and independent investigation. Our mission has always been to make Missouri the best state in America for veterans—and that means all veterans. We’re going to keep fighting for our veterans every single day.”