An investigating police officer recorded the city prosecutor's office refusing to even consider his report and evidence.

ST. LOUIS — On paper, you might think it's a slam dunk case.

On January 1, two St. Louis Police officers got more than 1,000 highly addictive opiate pills and more than $30,000 in cash off the street.

It was the result of a drug investigation and surveillance that began the week before at a gas station in the 5000 block of S. Grand.

But that's not all.

The officers also got a confession from their one and only suspect.

According to a redacted police report obtained by 5 On Your Side, the lead officer on the case wrote the defendant "...admitted to selling prescription narcotics to support his own narcotics addiction."

But the St. Louis Police Officer's Association says what happened after the man was arrested might shock you.

"We're in the middle of an opioid crisis where people are dying every day from opioid overdoses and she's completely dismissive of that case," said the union's business manager Jeff Roorda.

On Friday, the lead officer on the case walked into the circuit attorney's warrant office at the Carnahan Courthouse to apply for delivery of a controlled substance charge.

It's a process all officers are required to do if they have probable cause to believe a crime has been committed.

Roorda said, "That's where we stop delivering justice and the prosecuting begins."

But in this case, Roorda said there was no justice.

Not only were no charges considered or filed, the officer was shown the door.

"They didn't even keep the report. They handed it back to him and said they weren't going to look at it," Roorda said.

5 On Your Side is not revealing the identity of the officer to protect his safety and the sensitive nature of this investigative work.

But his encounter inside the warrant office with two armed investigators and an assistant circuit attorney was captured with his cell phone. It's believed the officer was also armed at the time.

Here is a transcript of the less-than-two-minute conversation:

ATTORNEY: How you doing? I have the paperwork here. We’re not taking warrant application for you. And you should talk to Major Sack.

OFFICER: Uh, Major Sack said to talk to Chris Brinkley. Is he here?

OFFICER: Okay. Well, I can wait for him because I’ve sent him numerous e-mails per Major Sack. And I have to do this. This is part of my job. Like, there’s a currency seizure involved. I have to do this today. I’m at my limit. I’m past 30 days on one of them. So, my boss needs this done. If I can’t do this, I can’t do my job.

ATTORNEY: I will tell you this application is not going to be processed.

OFFICER: You guys aren’t going to do it? Did you guys feel the need to bring armed people down here to do this? To tell me about this?

ATTORNEY: We’re talking about this afterwards.

ATTORNEY: I’m not raising my voice here. I’m trying to address this one issue. And any other issue you have with guys with guns, take it up with someone else. I didn’t bring guys with guns down here.

ATTORNEY: Okay, once again. No. Once again, we are digressing into those guys.

OFFICER: Okay. I’m just curious about it man. That’s all. I’ve never once made a scene or anything. I have to do this. Like, this is my job. My boss is making me come down here and do this. So that’s what I’m saying. That’s all I’m trying to say.

OFFICER: So you guys aren’t going to review this case for viability like you’re supposed to?

OFFICER: Alright, that’s all I need. Thank you. Alrighty.

Afterward, the officer sent a memo to a police supervisor in the second district, where the drug investigation initiated.

In the memo, the officer writes that both investigators "were clearly displaying their firearms while staring at me. One of the investigators appeared to place his hand near his firearm multiple times throughout my conversation..."

He goes on to write "...I feel someone in the Warrant Office specifically requested ARMED individuals for the purpose of intimidation, and I fear this has happened or will happen to other Police Officers."

In conclusion, the officer writes "In my mind, this behavior is not only unnecessary but is completely unprofessional. The hostility demonstrated by the members of the Circuit Attorney's Warrant Office needs to be addressed before more Officers experience this aggression."

You can read the full memo here.

"They're supposed to do their job and so is Kim Gardner, and only one of those two things is happening," Roorda said.

On Wednesday, 5 On Your Side asked St. Louis Circuit Attorney Kim Gardner about the video and the memo.

She said her armed investigators were already in the office and were not intentionally brought down when the officer arrived.

She said the officer, upon his arrival, was asked to leave by a desk clerk because he should have known his warrant application wasn't going to be entertained.

She said his stunt on camera just proves why the officer in question has been blacklisted by her office.

"The mischaracterization of this individual and the situation the officer brought to your attention, when we looked at the case, that is not even true," she said.

The officer is believed to be on Gardner's controversial exclusion list with 28 other city police officers.

Gardner has refused to go into specifics about why the officers ended up on the list, but said it goes to issues of credibility.

Their identities have also been ordered to remain confidential, per a court order.

In this case, Gardner said the officer involved knew he wasn't even supposed to be in the warrant office applying for charges.

"To have this officer handle it the way they handled it, when time after time the process has been communicated to their supervisor, at that point that's just taking matters into their own hands," Gardner said.

She said her staff handled the situation with nothing but respect and decorum.

But the existence of the exclusion list has put the city's chief law enforcement officer at odds with officers on the street.

And their union says this drug case is one example of how that tension leaves the community at risk.

"Each one of those thousand pills they caught him with has got the name of some young person on there who may overdose because he's out on the street," Roorda said.

Chief John Hayden declined to be interviewed for this story. Through a spokeswoman, he issued one statement that did not address the video his officer recorded or the memo.

However, it does allude to the fact that his officers won't stop applying for criminal charges anytime soon.

The officers of the St. Louis Metropolitan Police Department work diligently each and every day to keep citizens and visitors safe. This is best exemplified by the nearly 15% drop in violent crime in 2018. Additionally, their work represents an overall drop in crime of 6.4% in 2018. As I’ve stated before, our officers will continue to perform their responsibilities as outlined in all established policies and procedures.

To date, Gardner said about 100 cases have been dismissed due to the exclusion list. She said they're mostly "low-level drug offenses."

She released a statement in response to this story: 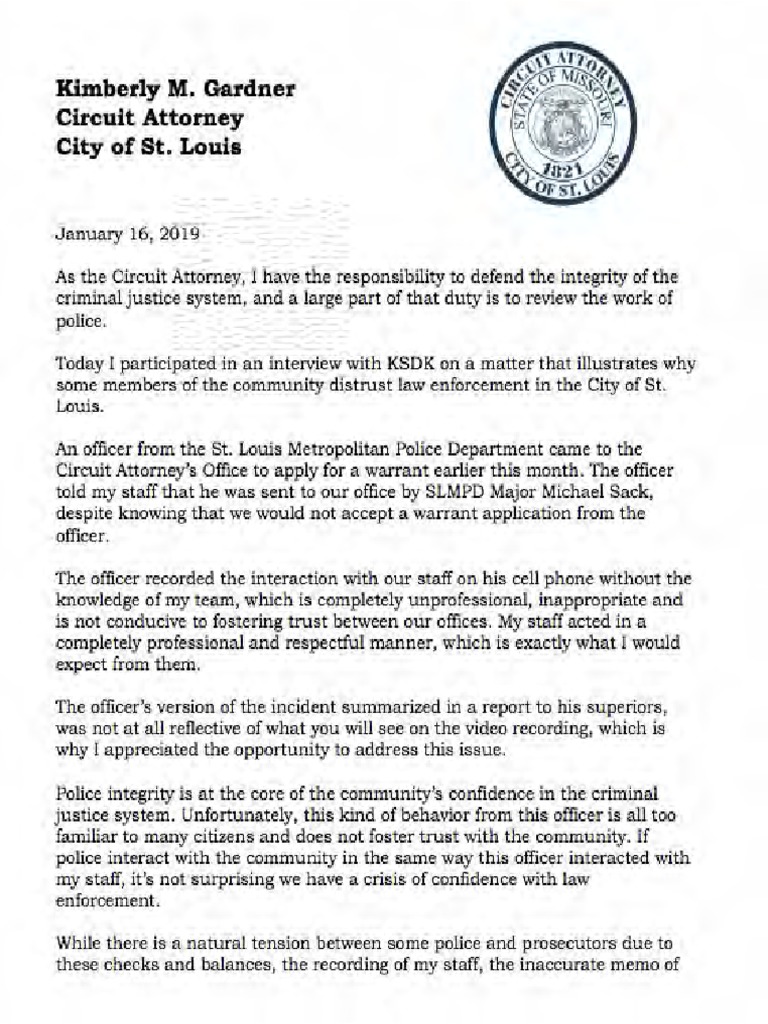