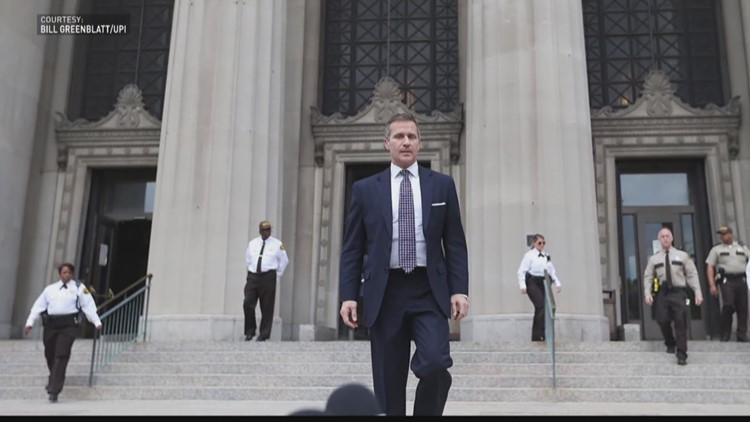 ST. LOUIS — More people could find themselves facing criminal charges as part of the legal fallout from the failed prosecution of former Missouri Governor Eric Greitens.

That was the big takeaway from a scheduled court hearing Thursday to review the status of the case involving William Don Tisaby, 66, of Trussville, Alabama.

Greitens was under investigation at the time after he was accused of threatening to blackmail his mistress with a picture of her half-dressed if she went public with their affair.

Greitens later resigned from office and all charges against him were dropped.

However, a grand jury impaneled by special prosecutor Gerry Carmody indicted Tisaby in June 2019 on seven felony charges, including six counts of perjury and one count of tampering with evidence.

The former FBI agent is accused of intentionally hiding a number of documents from the Greitens defense team and lying under oath during a March 2018 deposition.

Tisaby was not present for Thursday's hearing, but his attorney, Jermaine Wooten, and Carmody were present.

The main point of contention between the two sides was the turning over of discovery.

Carmody is seeking a protective order to ensure about 4,000 documents and pages of evidence are not released to the public or press.

He told St. Louis Circuit Judge Bryan Hettenbach that the order is necessary to protect the privacy of some parties involved in the Greitens case and the integrity of "an active criminal investigation."

When asked by Wooten about who specifically was under investigation, Carmody stopped short of identifying a person, but said the ongoing probe was focused on the now-failed prosecution of Eric Greitens.

Carmody added that while the grand jury that indicted Tisaby disbanded based solely on time constraints set forth in state statute, another grand jury panel could be seated upon request.

Wooten opposes the protective order, stating portions of the documents could be made public without revealing identifying information about certain people involved in the Greitens case.

He believes Carmody should have to identify exactly who the special prosecutor is continuing to investigate.

Judge Hettenbach stated he would likely issue a protective order over the information in "some form."

Wooten's motion to dismiss the indictment against Tisaby was denied Thursday, but he said he would likely refile it after receiving discovery.

Meantime, Greitens and others involved in his case are expected to be called to be deposed in the Tisaby case, which is tentatively slated to go to trial next year.