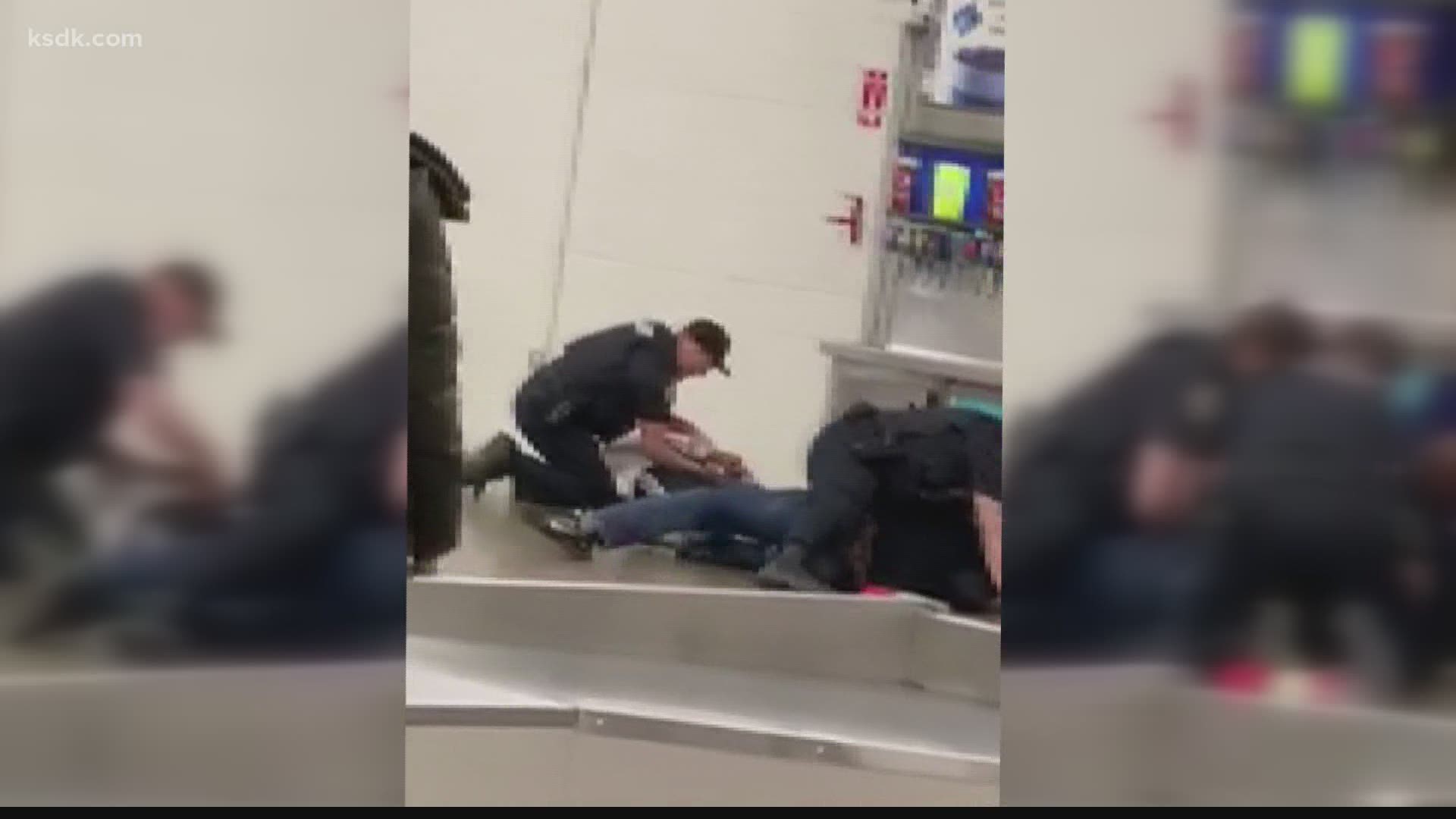 DES PERES, Mo. — A 68-year-old woman is suing the City of Des Peres and four of the city's police officers after she said she and her son were brutalized and beaten at a Sam's Club store on March 23.

“Just throwing me to the floor," Gray said, during a virtual press conference on Monday. "Just took me by my purse and just slammed me to the floor like I was some kind of nothing. And them I’m like 'Watch it, watch it…you guys are hurting me. What is going on?'”

Gray said she feared for her son's life as she watched multiple officers detain him.

Gray is being represented by Action Injury Law Group, a national civil rights law firm based in Chicago, as well as co-counsel William E. Dailey Jr. of the Dailey Law Firm.

Andrew M. Stroth, the managing partner with Action Injury Law Group, confirmed there are multiple videos of the incident including surveillance video provided by the store. 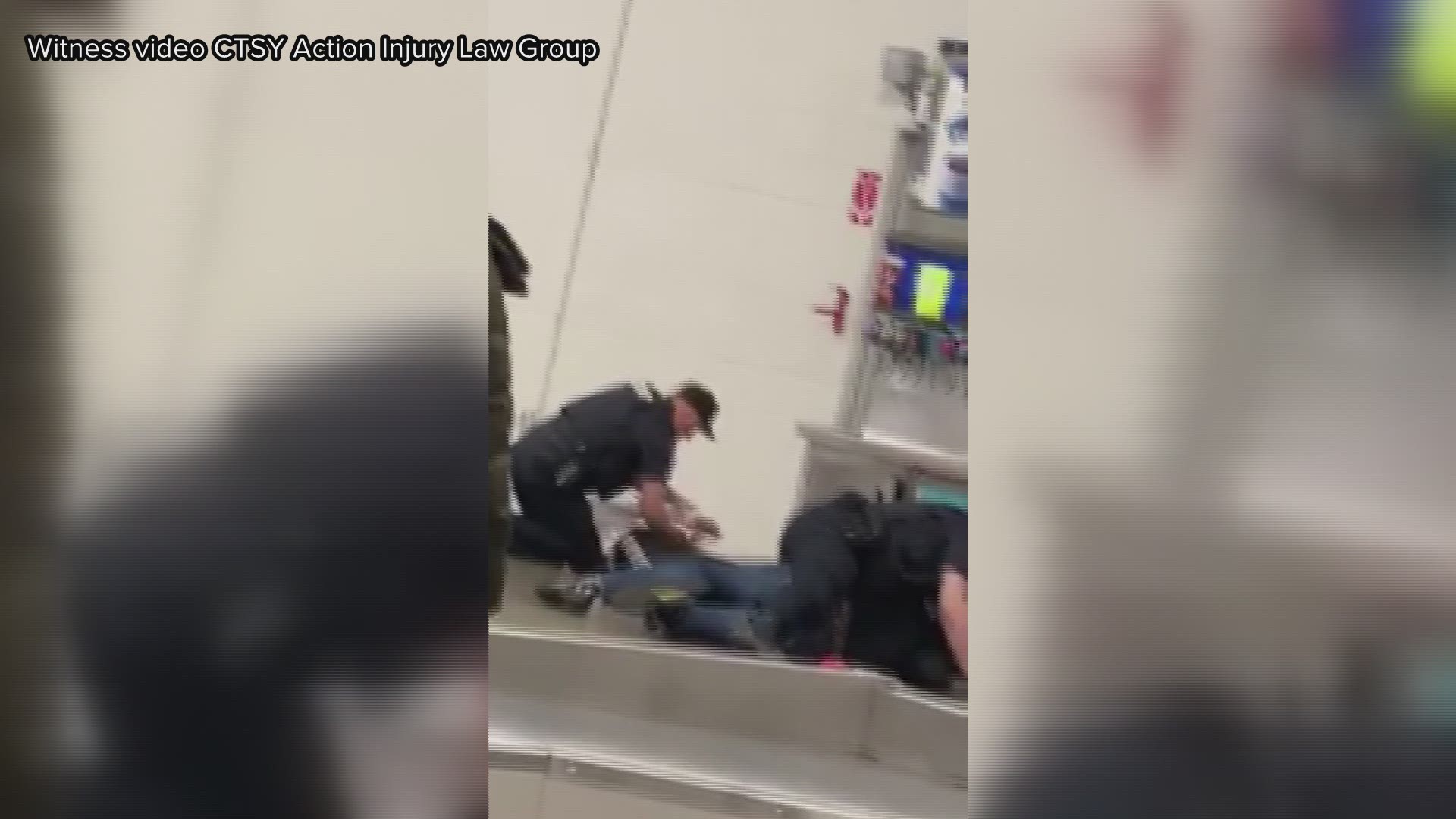 5 On Your Side was provided with a copy of cellphone video shot by one of the other customers in the store. The four-minute video begins with both Marvia Gray and Derek Gray being pressed to ground while officers are putting on handcuffs. Derek Gray has blood on his face and is screaming to be released.

“If you can just picture returning a television," Dailey said. "You’re trying to speak with whoever is necessary to initiate that process and in the next instance, you’re being forceully approached with handcuffs and with force.”

The lawsuit states Marvia Gray and her son, Derek Gray, purchased multiple items from the store that day, including a 65-inch television. As is standard for big-box retailers like Sam's, Gray's lawsuit states they had to show their receipt along with their purchases before exiting the store.

Upon realizing the television would not fit in their vehicle, the Grays left it at the store until they could return to pick it up. The suit states Derek Gray returned to pick up the television later in the day. When he returned, the TV was withheld from him because an employee initially thought he was trying to steal it. The lawsuit states another employee intervened to confirm Gray had purchased the television earlier in the day and he was able to leave with it.

According to the lawsuit, a Des Peres police officer followed Gray to his car as he left the store with the television. The suit also claims the officer was informed by a store employee that the television was purchased.

The Grays claim that upon arriving at his mother's home and telling her he was suspected of stealing, they decided to bring the television back to the store for a refund.

As the two were at the customer service desk requesting that refund, the lawsuits state four officers "violently and physically seized Marvia Gray and Derek Gray, throwing them to the floor, beating them, handcuffing them and arresting them."

The suit states the officer's actions were "without cause or adequate provocation".

On March 25th, two days after the incident, The Des Peres Police Department sent out a press release, confirming that an officer believed he witnessed a possible theft, but after speaking with store management and the people involved, "a theft could not be determined".

The release confirms officers were dispatched to the store less than an hour later for a reported theft. Officers were made aware that the call was for the same suspects involved in the prior incident, but the officers said this time they were notified the items were stolen.

The narrative released from the department on March 25 states the scuffle between Derek Gray and the officers started when Gray was told he was being detained. The press release described the incident as a "struggle" involving Gray attempting to remove a fire extinguisher from the wall "in a manner to attempt to use it against the officer" before it was removed from his hand as he was wrestled to the ground.

Des Peres police confirmed their officers were assisted by neighboring agencies. The department stated four officers were transported to a medical center for treatment.

Gray's lawsuit states that both she and her son suffered multiple injuries from the altercation.

Marvia Gray, who said she suffers from rheumatoid arthritis, osteoporosis and glaucoma as well as other conditions, said the altercation left her with injuries to her back, tailbone, rotator cuff, knees and arms.

The lawsuit states that Derek Gray suffered head injuries that required stitches and metal staples, an injury above his eye requiring stitches, three shattered teeth and severe neck and back pain.

Along with their legal counsel, the St. Louis County chapter of the NAACP said it is standing with the Grays to seek accountability for the officers.

President John Bowman said they will continue pushing for justice until they feel it's been reached.

"Unfortunately, I get these complaints way too often," Bowman said. "It appears in more and more police interaction between people of color and white police officers, there seems to be this feeling that they treat black people as a weapon because of their color.”

"The city was made aware today by the local media of litigation filed against the city and four (4) of its public safety officers alleging excessive force in an incident which occurred March 23, 2020 at SAM’s Wholesale in Des Peres. The city will confirm an incident occurred on March 23rd and that Derek Gray along with the arresting officer were injured in the incident and both treated at a local medical facility for injuries. Both were subsequently released after treatment. Charges remain under review by Prosecuting Attorney Wesley Bell who has been provided a copy of the store video and all incident reports by Des Peres police. The city will have no further comment at this time.

The city has not received a copy of the lawsuit and is not in a position to respond at this time to any of the specific allegations in the claim. Des Peres Director of Public Safety Eric Hall has reviewed all reports and a video of the incident and unequivocally denies that officers used excessive force to “beat” the plaintiffs as alleged in the press release from the NAACP."