Fire destroys mother of 5's home: 'We don't have a Christmas'

It was a fire that left behind a path of destruction, which is what remains in a house full of memories. 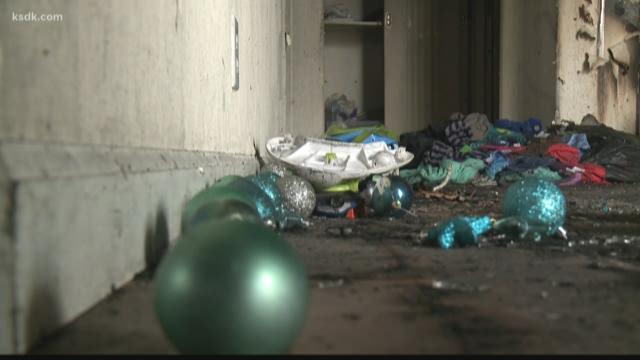 FAIRVIEW HEIGHTS, Ill. -- A single mother of five is left sorting through rubble instead of wrapping presents for the holidays.

On Friday, a fire broke out and destroyed Darneisha Williams’ Fairview Heights, Ill. home, leaving her and her five kids without a place to live.

It’s the unfortunate reality for Williams.

Williams’ house is a total loss. The kids’ toys and clothes are basically gone. It was a fire that left behind a path of destruction, which is what remains in a house full of memories.

"I can't see my kids open up gifts in their own house for the holiday," she said.

The family was set to celebrate their fourth Christmas in the home. Now, they have to spend their holiday somewhere else.

"[My kids] don't care about getting gifts. They say we just want a house and our own bed to sleep in," she said.

They pulled what they could from the rubble and took them to a hotel, provided by the American Red Cross.

"There is nothing like home. I just want to be home,” said Williams’ daughter, Makia Foster.

To be home is the only Christmas gift these kids want, and to see their mom happy. For Williams, that is easier said than done.

"I couldn't really cry in front of my kids, but my kids knew I was hurt," she said.

The future for the family may be uncertain. But, with her kids by her side, it remains promising.

"My kids are my heart, they make me happy," she said. "My kids are basically my support, they keep me going."

Fire investigators think a space heater may have caused the fire. For now, the American Red Cross is funding their hotel stay. After that, they may stay with family members.

But, they may not have too. The Fairview Heights Fire Department is hosting a fundraiser for them.

Their goal is to get this family in a home before Christmas.

Firefighters said they hope to get more organizations involved.