"If you just looked at the building there, it's just total devastation," Affton Fire Chief Nick Fahs said 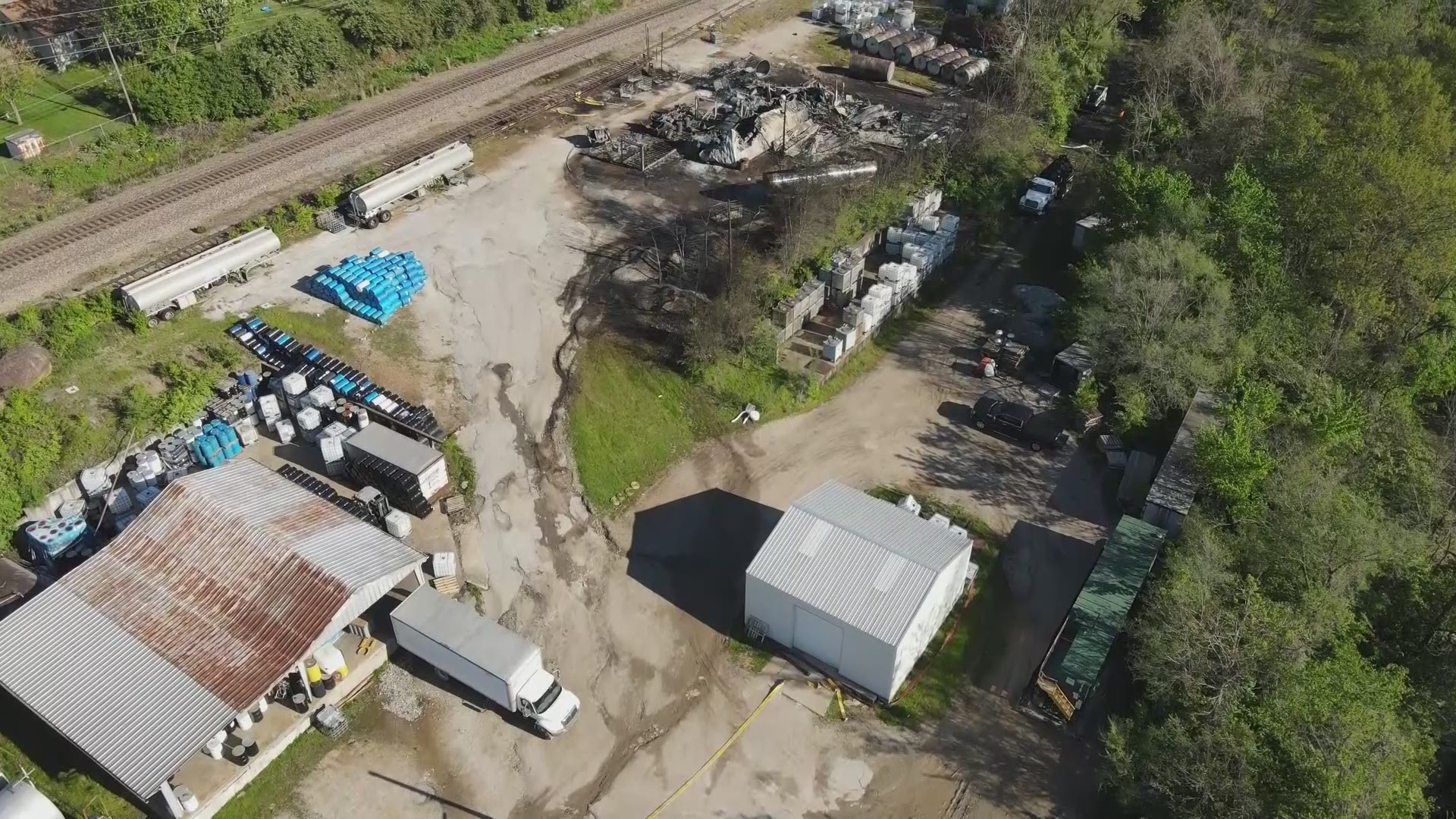 AFFTON, Mo. — The fire burning at a chemical plant in Affton was extinguished Thursday evening after multiple explosions at the plant.

Lt. Matt Coppin with the Metro West Fire Protection District said there were multiple explosions at the Manor Chemical Plant at around 2:30 Thursday. He said a tanker truck, about 10 containers and the chemical plant building were all on fire when crews arrived.

First responders prioritized evacuations, so firefighters and police officers from nearby departments went door-to-door in the area, telling people to get out of their homes.

In a tweet, the St. Louis County Police Department said they were evacuating everyone within a half-mile radius of the plant. The department said evacuees can go to the Affton Elks Lodge at 6330 Heege Road, where the Red Cross is providing assistance.

We are currently evacuating everyone within 1/2 mile radius of the fire. Evacuees can go to the Affton Elks Lodge at 6330 Heege Road where the Red Cross will be providing assistance.

Once they were able to focus on the fire, crews from around the area worked together to put out the four-alarm fire. 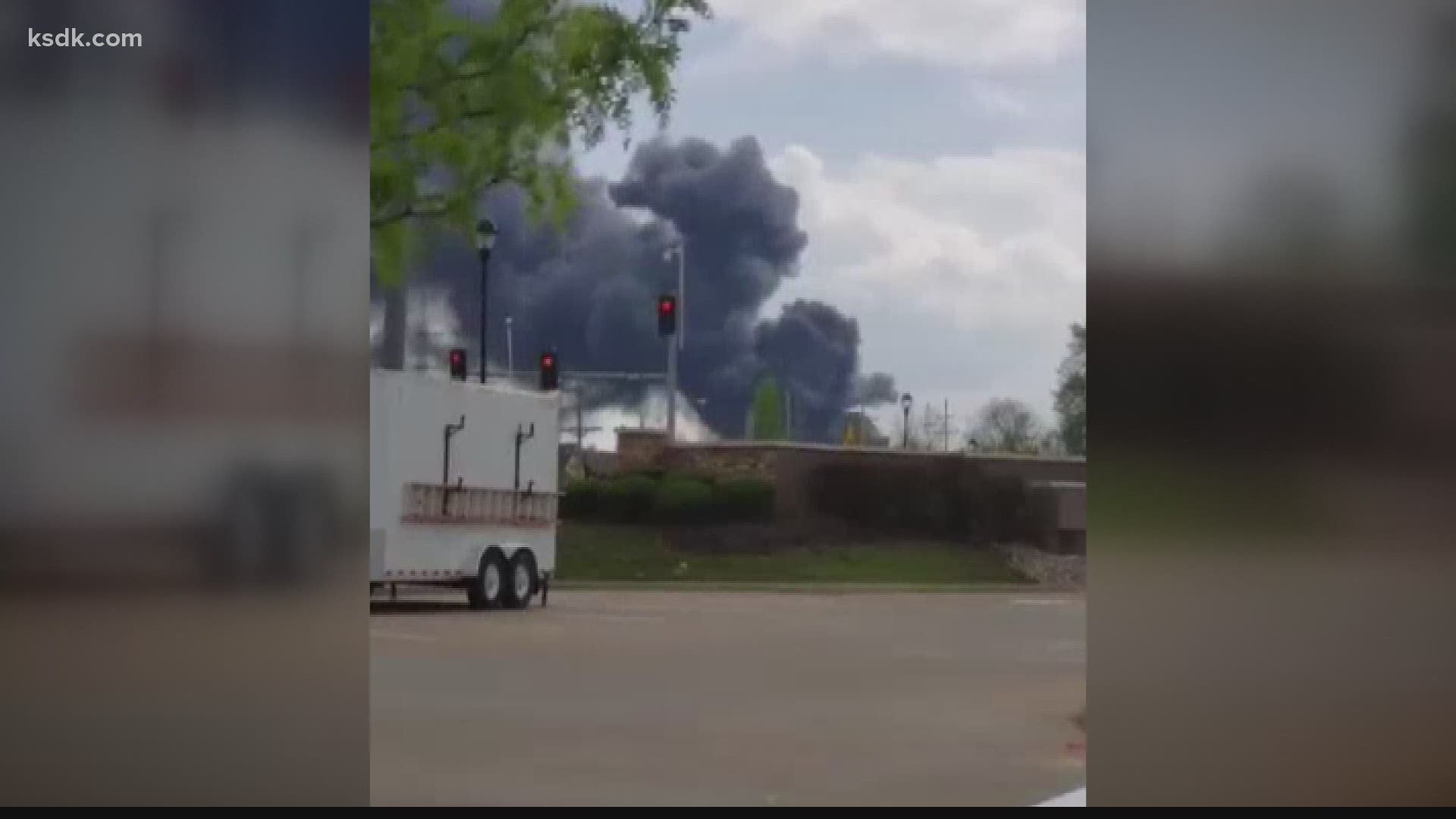 Affton Fire Chief Nick Fahs said there were 62 fire trucks on the scene. He said the firefighters used foam to put out the fire, which was declared under control at around 5 p.m.

"This little fire department in Affton, we never could have handled that," Fahs said. "If we wouldn't have had those 62 trucks there, it would have been catastrophic."

Fahs said all three people working at the plant at the time of the fire were able to make it out safely. He said the employees helped firefighters identify what containers held what chemicals, which Fahs said helped immensely in fighting the fire. Fahs said some of the supporting departments deployed drones, and the employees were able to give the department information that helped in putting out the fire.

"This was the first time I had ever used drone technology, and it gave us a tremendous advantage because, with the help of the workers that were here, they were able to tell us by looking at the drone video 'That container's empty, this one's full,' 'This one has a certain kind of chemical in it,'" Fahs said.

Coppin said firefighters were expected to remain on the scene for several hours to make sure everything stays under control.

Fahs said the injured firefighter suffered exhaustion after pulling a large hose hundreds of feet. He was taken to the hospital for treatment.

Fahs said the explosions and fire completely destroyed the wooden part of the plant. After a preliminary investigation and talking with the employees, Fahs said the department believes a spark or electrical issue with one of the machines at the plant started the fire.

"If you just looked at the building there, it's just total devastation, we would have had a hard time [determining what started the fire] just by looking at twisted metal and, basically, the wooden part of the structure is gone."

According to the Manor Chemical website, the company has been in business since 1972 and specializes in automotive, paint/coatings, labeling, printing, industrial manufacturing and dry cleaning.

According to the EPA, Manor Chemical has had three years of continuous noncompliance with the Resource Conservation and Recovery Act, resulting in a written informal enforcement action in 2017 and a notice of violation in 2018 from the state.

The Metropolitan Sewer District said investigators found no signs of chemicals associated with the fire in sewers and creeks downstream. Any further investigation will be carried out by the Missouri Department of Natural Resources.

An officer near the scene told 5 On Your Side's Casey Nolen that the smoke from the fire was dangerous due to the chemicals burning.

That plume is dangerous officer with gas mask just told me. Chemical fire in Affton. Fire fighters said to be unable to put water on it yet, bc of explosions #breaking pic.twitter.com/VX8VULC1mW

In a tweet, Affton Schools said all students still at school were being held for dismissal until further notice because of the explosion and fire. A school spokesperson said students at Gotsch Intermediate and Mesnier Primary were held until firefighters advised they were safe. As of 5 p.m. all students have been released.

ALERT: Due to a chemical fire in the area, all students still at school will be held for dismissal until further notice. We will update families as information from local authorities beomces available. pic.twitter.com/y5l2ulXJQM

Editor's note: A previous version of the story incorrectly reported the explosion was at Kerry Ingredients and Flavours.