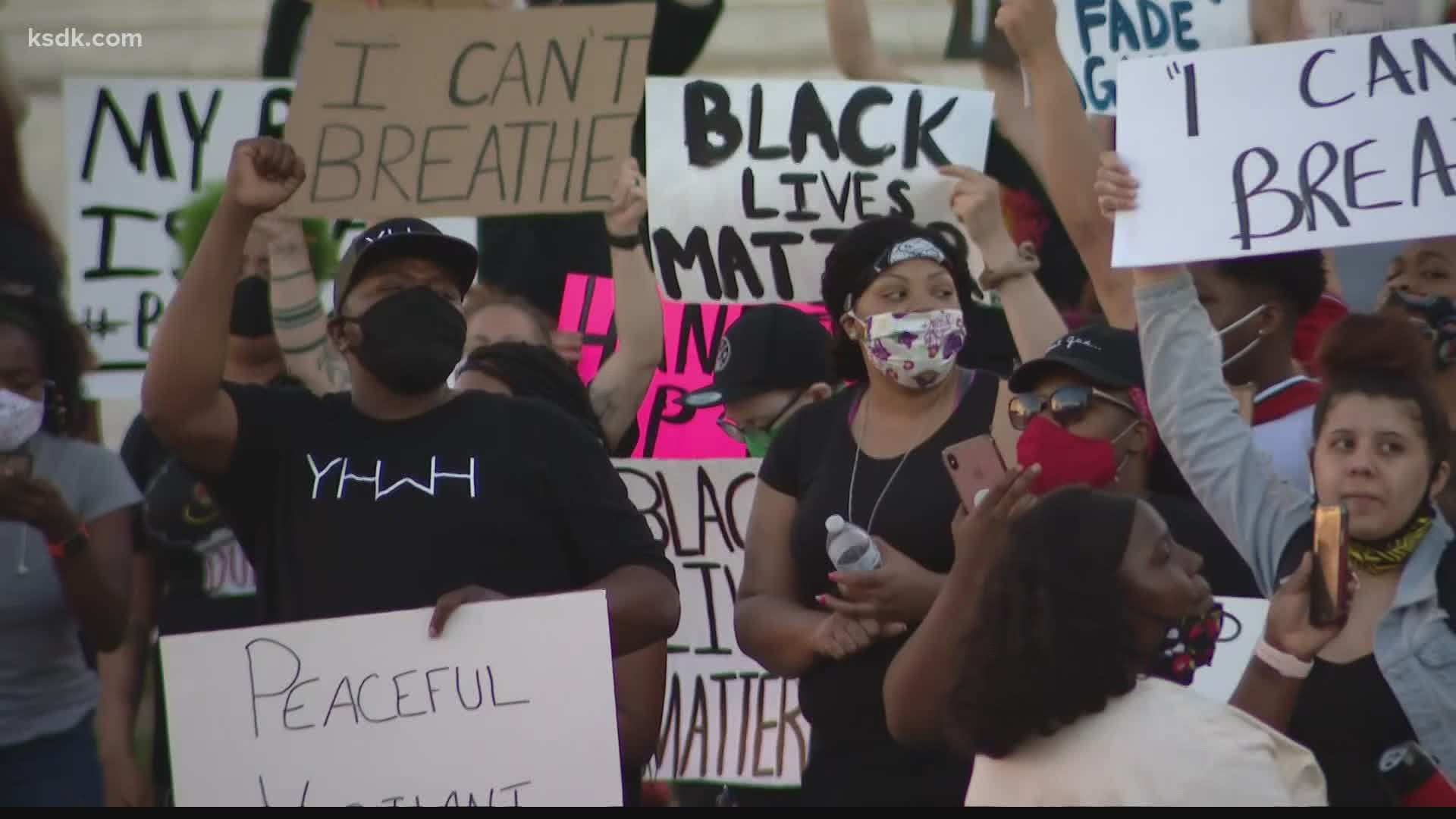 EDWARDSVILLE, Ill. — Hundreds of people lined up Sunday on the steps of the Madison County Courthouse in Edwardsville — and drove by honking horns — to call for justice in the death of George Floyd.

"All the black people, they're just losing their lives for the color of skin. And it's absolutely ridiculous,” Brianna Collins of Troy, Illinois, said.

They said they’ve seen enough. But, in the crowd, they also saw hope.

“This is a good sign that everybody is out here,” Alexis Jacobs said.

"I think this is a beautiful thing that we can all come together, this is all races coming together,” Collins said.

"We can't sit back and let this keep on happening,” she said.

A pastor also saw hope in the actions of the mostly young demonstrators.

"It's really good to see it peaceful and this being the way that it should be,” he said.

Pastor Matthew Ware came to keep a caring eye on the community he serves, after seeing the destruction in other cities.

He said there’s a lot of anger and frustration, and it’s up to leaders like him to listen.

“I think we have to position ourselves to talk to them and find out why they’re so angry and not be so quick to judge," he said.

At the steps of justice, the protesters shouted for justice --- and peace.

"I hope people across the nation will see this and know that it can be done this way, constructively,” Ware said.

5 On Your Side did not see any police officers at the protest. Protester Brianna Collins noted she’d seen officers from other departments join demonstrations in solidarity, and she would have liked to see that happen in Edwardsville.

The police chief sent a statement condemning the actions of the officer charged with George Floyd’s murder, saying the officers here share in the grief and anger over his death.

“The men and women of the Edwardsville Police Department were shocked and saddened by the death of George Floyd in Minneapolis. It was difficult to watch the video of Mr. Floyd begging for help while a police officer was kneeling on his neck. This action clearly did not represent proper restraint tactics in policing.

Edwardsville Police Officers take pride in providing professional and courteous service for our community, while respecting the dignity of all people and the sanctity of human life. As individuals, and as a department, we support and defend the rights of all people.

To that extent, we support the rights of those who have gathered at the Madison County Courthouse today in order to have their collective voices heard. We share in their grief, frustration and anger over the death of Mr. Floyd. Our officers have worked hard to develop a strong collaborative relationship with the members of our community. We have trained often in the appropriate use of force, safely taking individuals into custody and de-escalation techniques.

The men and women of our police department will continue to provide respectful, compassionate and professional service to the citizens and visitors of Edwardsville. We will always be there when our community needs us. Thank you for allowing us the opportunity to serve.”