"It's OK to not be OK" : After her daughter's suicide, mother on mission to save others

Lela Thompson's daughter Shayley Akers died by suicide Aug. 31, 2016, after battling depression. Now, she is on a mission to save others. 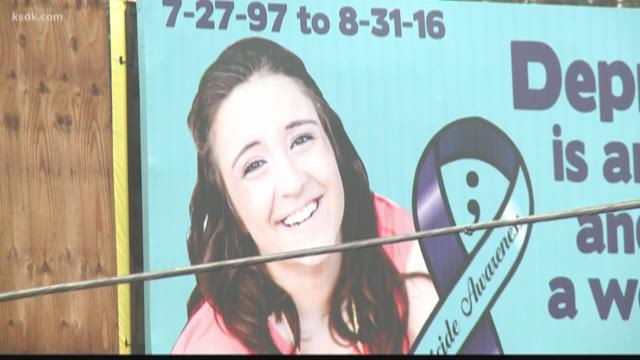 HILLSBORO, Mo. — The Hillsboro community is mourning the loss of two students, who died by suicide earlier this month.

The Jefferson County Sheriff’s Department confirmed a 13-year-old girl and 18-year-old man both passed away earlier this month. The sheriff’s department says both teens attended the Hillsboro School District.

A mom who shares the same unfortunate tragedy as these families wants people to not shy away from the conversation of mental health. Lela Thompson’s daughter Shayley Akers died by suicide August 31 2016, after battling depression. She was a graduate of the Kingston K-14 School District.

“She was 19. She was a cheerleader. She was homecoming queen,” Thompson said. “She would give anybody the shirt off her back. She was that type of person."

Thompson didn’t know her daughter’s silent depression would say so much. After the sheriff’s department told her about Shayley’s passing, it was a day that changed Lela Thompson's life forever.

"I didn’t eat for three days when it first happened,” she said. “They were about to put me in the hospital. It was just an indescribable hell."

There were so many emotions, so many questions. But for her, not as many answers

"She was about as normal a teenager as anybody could ever imagine."

Thompson's daughter left a goodbye letter. Shayley planned her funeral, but also planned for her death to help other people live.

“She said mom...you were put on this earth to do good."

Those words from Shayley helped Thompson create Shayley's Angels, a nonprofit to help kids and adults deal with mental illness. She created a billboard, which rests on Highway 21 in Washington County not too far from Hillsboro. It reads “Depression is an illness and NOT a weakness”. The billboard also have the suicide hotline number on it as well.

Since she started the organization, she talked to many people and she said saved many lives.

"They were literally, at the time, they were going to end their life and they decided not to," Thompson said.

One of her daughter’s Shayley’s last request before she passed away was to have a “realtalk” about mental health. A conversation about mental health and suicides are tough topics, she said. But, she also said we must talk about them. She said if you do have a mental illness, call the suicide hotline at 1-800-273-8255 or text 741741.