The threads of a flag are sometimes ties that bind. 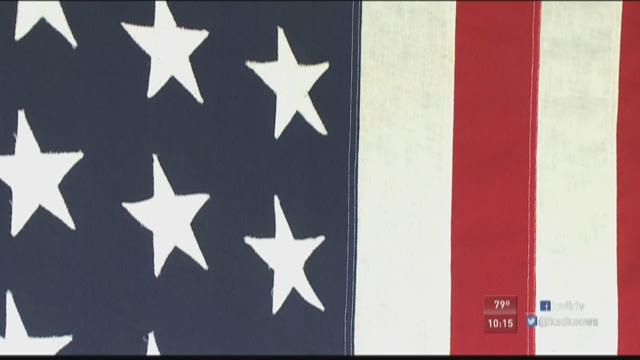 The threads of a flag are sometimes ties that bind.

This one goes up at the Kohler house every Memorial Day.

"It will hang there throughout the entire day," said Keith Kohler.

It was paid for not with cash but with blood, courage and tears.

"We got the radio station and the first thing we heard is that Pearl Harbor was bombed," said Charles Kohler, remembering a car ride back from St. Charles, Mo. in 1941.

The 94-year-old Kohler remembers signing up for the Marines shortly after the Japanese bombed Pearl Harbor. By 1945, he was part of the American invasion on the island of Iwo Jima.

"We all go in together, other men are already there and getting the hell knocked out of them," he remembered. "You know I was never really scared. I was there to get a job done Mike."

Just hours after landing on the beach, Kohler was badly wounded when the bunker he was in was hit by a mortar shell.

"I'll tell you I never heard an explosion like that in my life, the other boys got killed," said Kohler.

Bleeding and unable to walk, the young gunnery sergeant somehow crawled back to the beach, then into the water and onto a ship.

Four days later, as medics looked after him, he looked out and saw the most iconic scene of World War II, the raising of the flag on Mount Suribachi.

"I got a chance to see the flag and I thought 'Oh God, we won this thing already.' It wasn't the case, but I thought so," he recalled.

Kohler spent the next year in the hospital with two badly mangled legs.

After returning home, he married his sweetheart Juanita , raised three boys and had a successful printing business. Every Memorial Day is a time to reflect.

"He'll be the first to tell you that he's not a hero," said his son Keith. "The heroes are those that didn't make it off of the islands."

One of the men who didn't make it off Iwo was Edwin Kohler, Charles' younger brother.

"They tell me he got a big shrapnel wound in his back and he was alive and they got him back to the ship like they did me, but on another ship though, and he died on board ship," recalled Charles.

Charles still has the telegram the Western Union man brought to his parents' door.

Edwin was buried at sea, and the flag that draped his canvas coffin was sent back to St. Louis. That's the flag that flies at the Kohler house every Memorial Day.

It's a tribute to him and to all the heroes who paid the ultimate sacrifice for our freedom.

"It's a day that I'm glad I'm still here to honor them," Charles said.

The veteran and his family helped weave the fabric of our country by making sure we can count on Stars and Stripes forever.

1 / 94
KSDK
Thousands of Scouts from the St. Louis area gathered at Jefferson Barracks National Cemetery to place an American Flag on the graves of our Nation’s fallen soldiers Sunday. This was the 67th year scouts took part in the Memorial Day Good Turn event.