They were just a few months away from graduation, but students at Missouri College now say they have been blindsided by the devastating news. 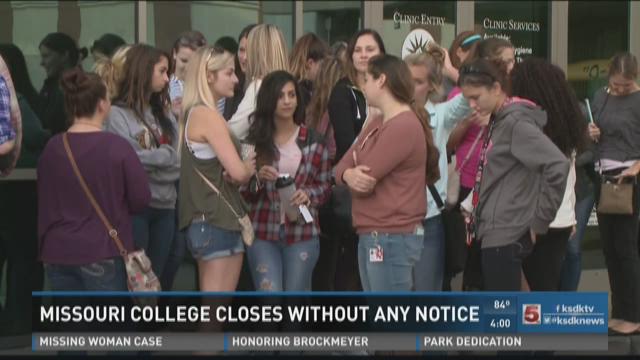 They were just a few months away from graduation, but students at Missouri College now say they have been blindsided by the devastating news.

The for-profit school announced mid-week that it would be ceasing operations immediately.

Students said everything was business as usual on Tuesday until around lunchtime.

That is when they said they were dismissed early and told to take the rest of the day off.

“It seemed a little unusual, but we all just assumed everything was alright,” Curran said.

A few hours later, students said they received voicemails and/or e-mails alerting them to the college’s permanent closure.

It was news that came as a devastating blow to those trying to finish their degrees or certificates. Many of them are student parents who also work on the side.

Curran said, “I have three kids at home depending on me to support them. And I saw this as a way to provide a better life for us.”

On Wednesday morning, a handful of upset and frustrated students gathered outside the Brentwood campus off South Hanley Rd.

They were hoping to get answers from administrators and retrieve their personal items and supplies. But the doors remained locked and guarded by private security most of the day.

Student Katie Hinchcliff said, “We have personal belongings inside the building that we’re unable to get. They won’t even open the building for us.”

But more upsetting than that, students said, was all the money and classroom experience that they worry will not count for anything.

Those studying to become a dental hygienist said they were on an accelerated 18 month program not offered anywhere else in the area.

“We’re all out $42,000. We’re unable to transfer our credits anywhere else,” Hinchcliff said.

Curran added, “We put a lot of faith in this college and they’ve really violated our trust.”

Now they’re all holding out hope another community college or school will let them finish out their coursework.

“We just want our degrees. If we can get our degrees, I don’t think any legal action will be taken,” Smith said.

Missouri College has been in the area, focusing on healthcare and medical education for more than 50 years.

In a statement posted on its website, it blames the closure on a financial shortfall on the part of its owner Weston Educational Inc.

The statement said the company closed all 10 campuses that it owns and operates, including Missouri College.

The school said it would work with students on obtaining transcripts and on exploring possible transfer options.

You can read the full statement here: http://www.missouricollege.edu/