Legislators have been in special session since July 27 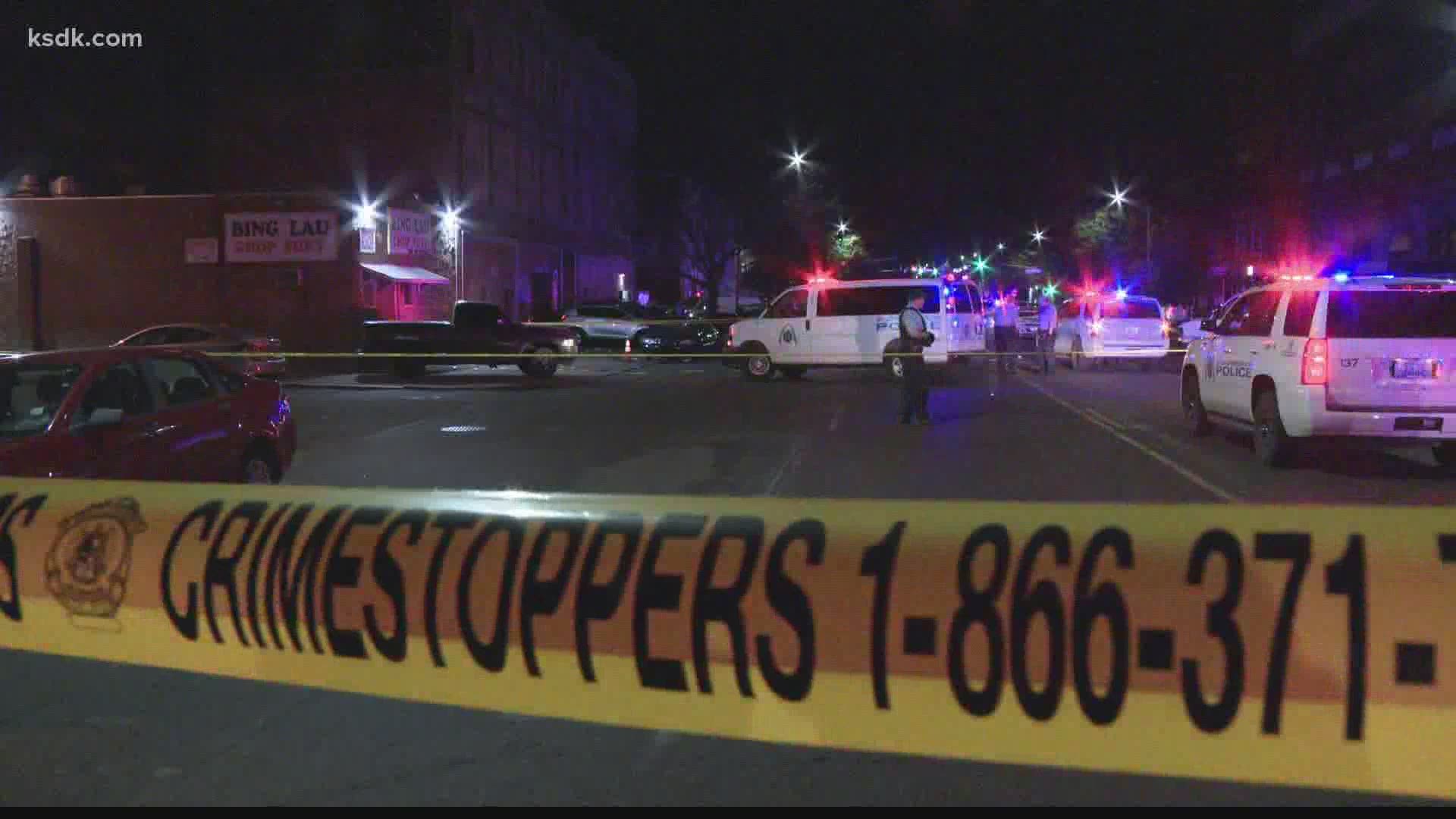 JEFFERSON CITY, Mo. — Missouri Governor Mike Parson is expanding the topics of a special session to include a controversial proposal that would give the Republican Attorney General unprecedented power over how homicide cases are prosecuted by the St. Louis Circuit Attorney, a Democrat.

Should legislators adopt the proposal, St. Louis Circuit Attorney Kim Gardner would have 90 days to issue homicide charges on cases police bring to her office. If she did not issue any warrants on a case within those first 90 days, Attorney General Eric Schmitt’s office could issue the charges -- only if St. Louis Police Chief John Hayden asks Schmitt's office to do so.

The plan is most often referred to as “concurrent jurisdiction” — something the Missouri Prosecutor’s Association opposes, saying it takes away the power of a local elected prosecutor.

The president of that organization, St. Charles County Prosecutor Tim Lohmar, said the group is reviewing the governor's most recent proposal and was therefore not ready to comment.

Gardner won the Aug. 4 primary with more than 60 percent of the vote. In a press release, she said the legislation "serves as a vehicle to interfere with the clear discretion of a democratically elected local prosecutor."

"This allows the Governor and his cronies to make a mockery of judicial checks and balances and demolishes any notion of a free and independent judicial system," Gardner said in the press release.

While some other states allow the state to be involved in local cases said, it would be a first for Missouri, said Saint Louis University constitutional and criminal law professor Anders Walker.

"What the governor is setting up is a potential constitutional battle here in the state of Missouri that may be unprecedented," Walker said. "One thing we teach is that local prosecutors have absolute discretion based on ancient, English common law. It's one of the oldest traditions we have."

Parson and Schmitt, both Republicans who have criticized Gardner's handling of other cases, insisted Monday the move is not political.

“Everybody ought to be working together, there are no politics when it comes to public safety,” Schmitt said. “It’s not about personalities, it’s about delivering justice for victims.”

Parson said he had not spoken to Gardner specifically about the idea, but had spoken with her "some time ago" about violent crime and she asked for additional resources. Bringing in experienced prosecutors from the Attorney General’s office is doing just that, he said.

“It should not matter who prosecutes a case, the local community still has a voice, local judges are still on the bench and local jurors decide on guilt,” Parson said. “This is about violent crime.”

Parson said the city has had 161 homicides so far this year, and Gardner’s office has issued charges on 33 of them.

“This is not taking her out of the role of prosecutor,” he said. “Having the state come in there is no different than the federal government coming in, I don’t know why you wouldn’t want someone to help take violent criminals off the streets."

"Governor Parson and Attorney General Eric Schmitt should listen to their constituents, who, overwhelmingly, have endorsed Ms. Gardner’s record by voting for her in the recent primary," he wrote. "It is the constituents of St. Louis who hold their Circuit Attorney accountable, not politicians in Jefferson City."

Gardner's predecessor, Jennifer Joyce, said she worried about the long-term impact the proposal could set in motion.

"That precedent is something we can always have then, and we can always use that as an excuse to do all kinds of things," Joyce said.

Parson insisted there is nothing personal about the proposal.

"Innocent lives are being lost, futures are being cut short, families are hurting and I cannot stand on the sidelines watch innocent people continue to be killed," he said. "These victims and families deserve justice and we must hold violent criminals accountable for their actions.”

The proposal is a watered-down version of Senate Bill 889, which did not pass during the regular session.

It would have allowed Schmitt to issue a case within 60 days after police applied for charges, and, if Gardner had already issued a case, the bill would have given Schmitt’s office the power to take over the prosecution and even issue additional charges.

That bill only applied to first and second-degree homicides as well as carjackings.

That bill, sponsored by a Republican, prompted opposition from Gardner and her fellow prosecutors statewide, but garnered support from St. Louis police.

Empowering the Attorney General to prosecute cases local prosecutors typically handle is a scenario that has already played out in at least one other city: Philadelphia.

But its effects there have been hard to measure.

Homicide rates continue to escalate in Missouri, especially in our urban areas. Innocent lives are being lost, futures are cut short, and families are hurting. This is unacceptable, and we must hold violent criminals accountable.

Legislators started the session July 27. Here are the other amendments Parson said he wanted them to focus on:

"I agree with Governor Parson that fighting violent crime, achieving justice for victims, and making our communities safer is a priority. However, it is clear that this legislation is not actually about addressing crime, instead it serves as a vehicle to interfere with the clear discretion of a democratically elected local prosecutor. This allows the Governor and his cronies to make a mockery of judicial checks and balances and demolishes any notion of a free and independent judicial system.

Furthermore, this bill does nothing to actually address the underlying issues that are driving violent crime. In fact, my office has an overall felony conviction rate of 97 percent. Unprosecuted crimes in our community come down to two variables – lack of evidence and lack of community trust with law enforcement. Solving crime will take all of us working together not divisive political maneuvers such as this that are designed to usurp the will of the people."

“Our mothers, fathers, and children are being killed at a record rate, and many people don’t feel safe in their own communities. Something needs to be done now, and the Attorney General’s Office is ready, willing, and able to step up and help prosecute these most violent crimes in the city of St. Louis. We need all hands on deck. Through our Safer Streets Initiative, our lawyers are already prosecuting violent crimes in the city at the federal level. We’re here to help, and if given the opportunity, we will work to obtain justice on behalf of victims and prosecute the city’s most violent offenders to create safer communities for all.”

“This is a shameful and obvious attack on St. Louis Circuit Attorney Kim Gardner, the first Black woman elected to the position. By significantly expanding Attorney General Eric Schmitt’s power over one specific jurisdiction, while Missouri faces rising gun violence across the state, it signals Parson’s true intention. Governor Parson has taken a page from President Trump’s playbook, dog-whistling about cities where Democrats lead. Governor Parson is working to divide us against each other by blaming poor, Black, and Brown people for our problems so Republicans can rig the rules in their favor, to benefit themselves and greedy lobbyists, insiders, and special interests. Governor Parson and Attorney General Eric Schmitt should listen to their constituents, who, overwhelmingly, have endorsed Ms. Gardner’s record by voting for her in the recent primary. It is the constituents of St. Louis who hold their Circuit Attorney accountable, not politicians in Jefferson City.

This is yet another political stunt in an election year that will give Jefferson City more power over the City of St. Louis. If Governor Parson and the Republicans were serious about gun violence, they would have listened last year to the calls to address gun violence, and they could have listened for many years as violence has grown under the Republican control. As a longtime politician, Governor Parson has had ample opportunities in his tenure as an elected official to work on finding solutions to gun violence. Yet, instead of addressing criminal justice reform and gun violence, Governor Parson and Republicans just want to score political points and distract voters from the lack of leadership they’ve shown during the COVID-19 pandemic.”