In the scene, Joseph and Mary are posing for a selfie with baby Jesus. 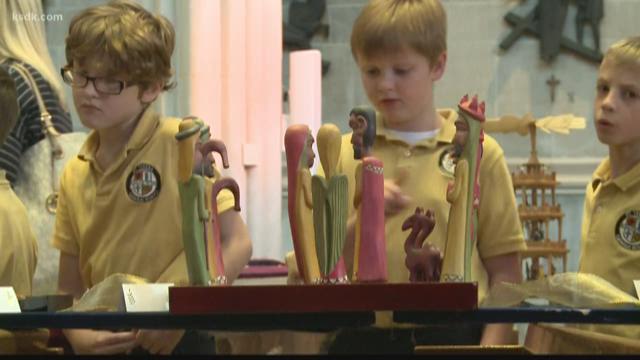 Hundreds of Catholic school students got an eyeful Friday as they walked through the Cathedral of St. Peter in Belleville.

Sixty nativity scenes from across the globe are on display from the shiny to the spinning, classic works we all recognize to one so small you might not recognize it at all.

Monsignor John Myler shepherded the young people through the exhibit, giving small glimpses into the way other cultures celebrate Christmas.

“Each people, each nation reimagines the birth of Christ according to its own culture,” he said.

“I think it's awesome to see the wonder in their eyes, and they point out things that I may not have noticed,” said Jamie Dedmon, an eighth-grade teacher from St. Theresa Catholic School.

And among the varied works of art is a modern scene that seems to stand alone.

“What's different about this one?” Myler asked a student. “It has modern stuff,” she answered.

In the scene, Joseph and Mary are posing for a selfie with baby Jesus. Mary’s holding a Starbucks-style coffee cup, the Three Wise Men appear to be Segway scooter-riding hipsters carrying Amazon Prime boxes and instead of a star, the manger is topped with a drone.

For Dedmon it's a display that raises questions about the appropriate image of the holiday.

Even the most whimsical in the bunch had a hard time getting behind this one.

“I thought it was funny, but I don't think that's what happened back then,” 11-year-old Olivia Boivin said with a grin.

But Myler said the offbeat scene has just as much value as all the others.

“I don't think it's sacrilegious,” he said. “I wouldn't put it under my tree, but it is part of culture.”

The Nativity exhibit will be at The Cathedral of St. Peter until Tuesday, December 12th. It's free and open to everyone.