The American Civil Liberties Union of Missouri filed a lawsuit against the City of St. Louis Friday for "unlawful and unconstitutional actions against people during the Stockley decision demonstrations." 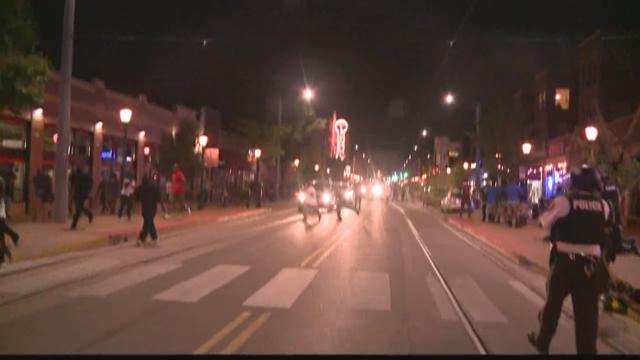 Police have arrested roughly 200 people since the Stockley decision.

The American Civil Liberties Union of Missouri filed a lawsuit against the City of St. Louis Friday for "unlawful and unconstitutional actions against people during the Stockley decision demonstrations." Now, some protesters and people are caught in the middle are questioning police actions.

A week ago Saturday in the Delmar Loop, Jeffrey Kahn Blackman was biking home when he came across protesters and police.

"I just thought, like, it's about time that I myself, as a current St. Louis citizen, see for myself what's going on there," Blackman said.

The Wash U student says he saw police begin to move.

"They opened up their circle and scooted a bunch of us onto the sidewalk and they started like pushing us with their riot shields and we were just standing in the street," he said.

He says one officer asked him to move twice. For Blackman, the street was public property, so he questioned why he should move. The next thing he knew, he was under arrest.

"Five of them just descend upon me," Blackman said. "I look back at them and scream at them like, look, I'm not resisting. Like stop squeezing my arms so much."

"I give a neutral view on my livestream. I don't give the anti-police rhetoric. I'm not for one side or the other," Robertson said. "With my hands behind my back, I was sprayed in the face with mace."

Robertson says police told protesters to leave 13th Street and Locust Street. He says they dispersed as directed and many people headed toward Tucker Boulevard.

"Then you see the police formations down Tucker one direction and the other from sidewalk to sidewalk," Robertson said. "They start beating on their shields and closing in."

He says he tried to leave but couldn't.

"They closed in on a large area," Robertson said. "People who didn't know what was going on were caught up in the arrest as well."

5 On Your Side also reached out to the St. Louis Metropolitan Police Department for comment. A spokesperson says they'll check with the Internal Affairs Division and get back to us Tuesday.

In the meantime, they encourage anyone who would like to make a complaint of officer misconduct to contact the Internal Affairs Division via slmpd.org or by calling 313-444-5652. Complaints may also be made in person at Police Headquarters at 1915 Olive St.