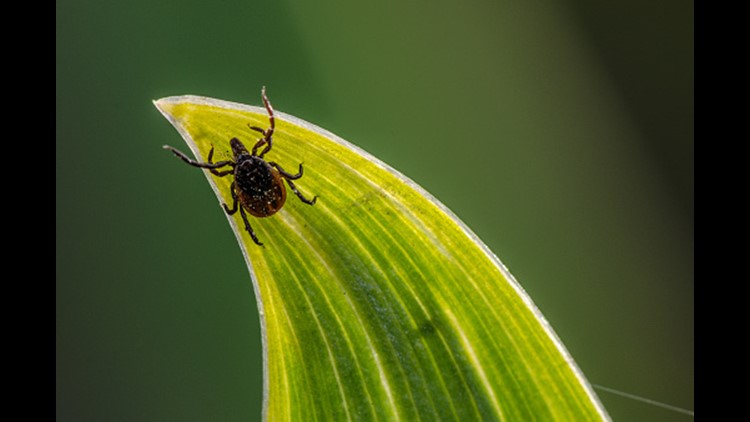 Photo by: Robert K
A tick in the garden trying to get on a carrier

ST. LOUIS — Two years after a Missouri state park employee died from complications from the tick-borne Bourbon virus, researchers are using a strain for the virus taken from her to find possible treatments and save lives of people with the rare disease.

Meramec State Park Assistant Superintendent Tamela Wilson died in June 2017 after spending 24 days in Barnes-Jewish Hospital in St. Louis for treatment of an illness that began after she was bitten by an infected tick near her home outside Sullivan. At the time only five cases of Bourbon virus had been diagnosed in the U.S., and Wilson's was the first in Missouri, The Washington Missourian reported.

The virus was first discovered in 2014 when a man living in Bourbon County, Kansas, came down with flu-like symptoms and died after being bitten by ticks.

Dr. Jacco Boon, an assistant professor of internal medicine at Washington University, is now working with the doctors at Barnes-Jewish Hospital who diagnosed and treated Wilson to test current and emerging flu treatments as possible cures for the Bourbon virus.

Because the disease is rare, researchers are using a direct strain of Bourbon virus taken from Wilson to create cultures and conduct testing.

"Without her (Wilson's) case, I would not have studied Bourbon virus," said Boon, an influenza researcher. "There may have been other cases before (Wilson's) but physicians wouldn't have known what it was, or to send it to the (Centers for Disease Control and Prevention). Bourbon virus is now easier to diagnose."

Boon said an experimental antiviral drug favipiravir, which inhibits a key protein the virus needs to multiply, has shown 100% survival rates in lab mice. The drug is approved for flu treatment in Japan but not in the U.S.

Because Wilson had underlying health issues when she died, Boon used lab mice with compromised immune systems for the tests. Healthy mice fought off the virus. All of the compromised mice given the Bourbon virus died six to eight days after infection, while the mice given the influenza drug survived.

Boon said it may be years before the Food and Drug Administration approves the use of an experimental drug.

"The first thing we are going to do is look at similar drugs," Boon said. "Awareness is also key. Bourbon virus is in circulation in the Midwest and beyond it. We are trying to set up studies and share information of how many people may have been exposed."

Tamela Wilson's daughter, Amy Daugherty, said she was thrilled research that could save lives in the future was possible because of her mother.

"I hate that she's gone, but knowing her death can be the result of something so great is just amazing," Daugherty said. "She was amazing in life and amazing in death as well. I'm so glad I shared her story after her passing. I knew something wonderful would come from it."

RELATED: CDC warns of exotic ticks spreading across the nation that may carry diseases

RELATED: Should I burn a tick off? 5 common myths about ticks