Restaurants are no longer limited by a certain percentage of customers inside, but they still must space out tables to allow for social distancing 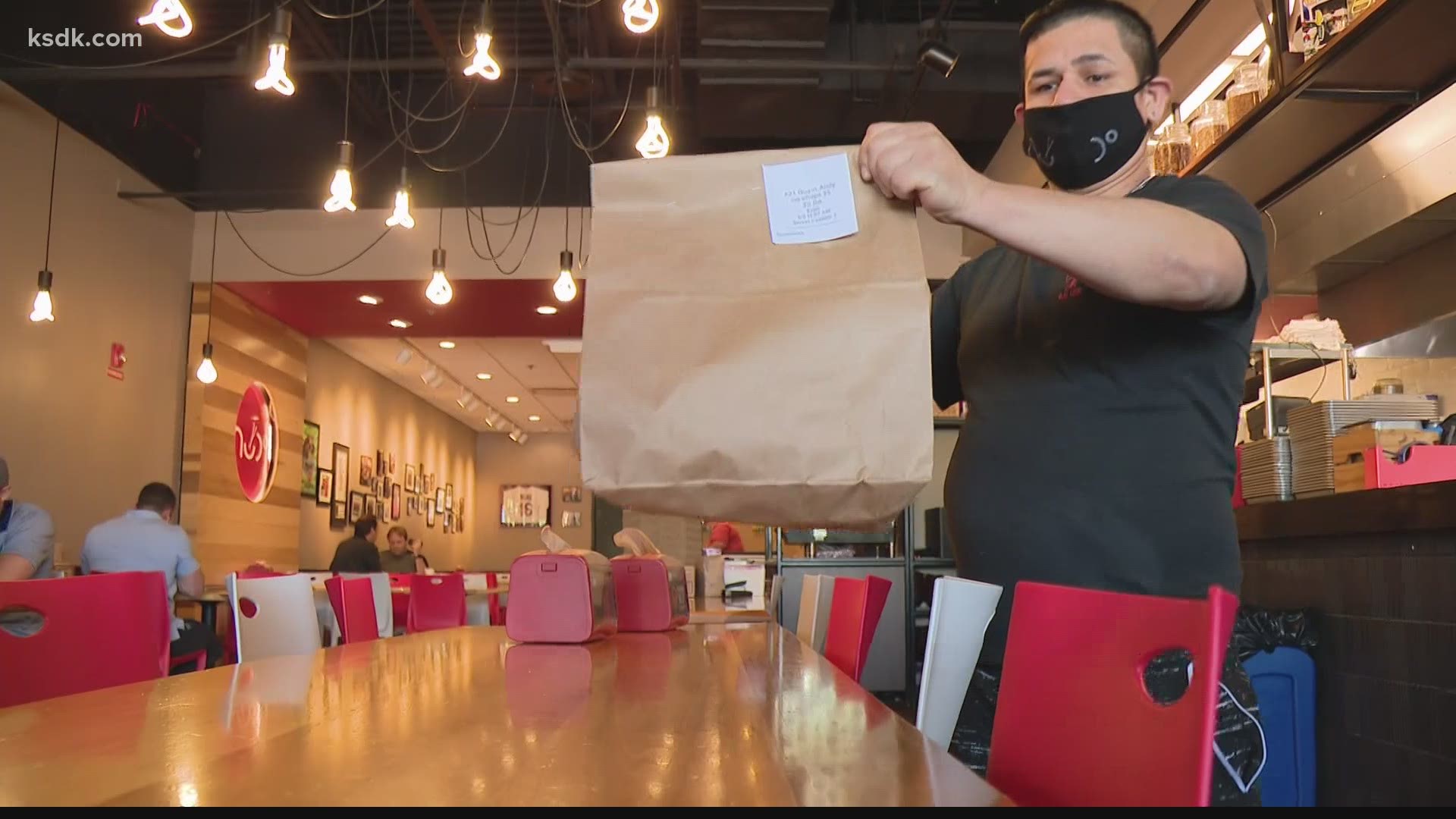 ST. LOUIS — Restaurants in St. Louis and St. Louis County will be able to reopen at full capacity beginning Monday after more than a year of coronavirus-related restrictions on capacity and hours of operation.

But don't expect businesses to be crowded at the levels they were before the pandemic.

The capacity limit was lifted for businesses in both the city and county. However, all businesses must still allow for social distancing. At restaurants, for example, tables and parties need to be separated by 6 feet of distance. So, the business capacity is no longer limited by a percentage but is based on social distancing.

Large events, including those where more than 500 people will be involved, are still required to submit safety plans before getting approved by the local health department.

"This is a new normal, not a return to normal," Mayor Jones said Monday.

The midnight curfew for businesses also was lifted.

One health order that didn't change is the indoor mask mandate. Face coverings will still be required inside businesses, even by those who are fully vaccinated. The county and city will follow the CDC's latest mask guidance when it comes to who needs to wear them outdoors and when.

Jones and Page said they are committed to taking a more unified approach to issues, including those related to the COVID-19 pandemic.

The changes announced Monday are part of the county and city's Reopen STL Order. Page and Jones said the changes are possible now for several reasons.

"The vaccine is now widely available; case counts have stabilized," Page said. "But most importantly this is the guidance we're getting from our public health experts in our departments of public health in the city and in the county and it's that advice that has guided us throughout the pandemic."

You can watch the full announcement from Monday morning in the YouTube video below.

Since the pandemic was declared last March, St. Louis and St. Louis County have enacted similar guidelines. Those included mask mandates, capacity limits and curfews that have been modified as the number of cases spiked or fell — but not always in tandem.

Before Monday's new reopening order, restaurants in St. Louis and St. Louis County were limited to a capacity of 50%, and restaurants in the city had to close at midnight. The county dropped its curfew several weeks ago.

The new orders mark the first time since March 2020 that restaurants in St. Louis and St. Louis County are being allowed to operate at full capacity.

In response to the pandemic, both the city and county — and later the state — issued orders prohibiting indoor dining for several weeks.

In May 2020, Missouri Gov. Mike Parson, a Republican, allowed all businesses in the state to reopen. That included restaurants. Local governments, however, were still permitted to enact their own restrictions.

Later that month, Page and then-St. Louis Mayor Lyda Krewson announced plans for indoor dining to resume at reduced capacities, but through the remainder of 2020 and into the first few months of 2021, capacity limits would ebb and flow based on COVID-19 case and hospitalization data.

In November 2020, the St. Louis County Department of Public Health issued a second order banning indoor dining, and restricted bars and restaurants to takeout orders and delivery, and outside seating. St. Louis, however, still allowed indoor dining at 50% capacity.

Several restaurants in St. Louis County were cited multiple times for thwarting the order, leading to visits by police and county health inspectors to remove customers and close the offending businesses.

The tighter restrictions came after the county reported a record 1,061 new cases of COVID-19 in a single day. The health department also said that indoor dining was a “super-spread” enabler because people take off their masks when they eat or drink, and that it had identified several clusters of cases linked to eating or drinking indoors.

In response to the restrictions, the Missouri Restaurant Association and dozens of restaurateurs filed a lawsuit that said Page had no proof that COVID-19 was spreading at their restaurants and that he lacked the authority to declare indoor dining illegal.

A state appeals court upheld an earlier ruling by St. Louis County Associate Circuit Judge John Lasater denying the restaurants’ request for a restraining order, and the restrictions remained in effect until early January when restaurants were allowed to reopen at 25% capacity as cases and hospitalizations decreased.

About two weeks ago, Missouri Attorney General Eric Schmitt, a Republican, sent a strongly-worded letter to Dr. Faisal Khan, the county’s director of public health, asking him to cite medical research and data that was driving the county's restrictions.

Schmitt said the orders "encroached on personal and economic freedoms."

"The restrictions of the pandemic were designed and intended as temporary measures, not an endless new world of extraordinary government intrusion on the lives of individual Missourians," he wrote.

A week later, St. Louis County Counselor Beth Orwick responded, providing data on which the county based its restrictions.

In the letter, Orwick wrote that "the situation on the ground in St. Louis County has improved to the point that (the department of public health) has recently been considering amending its health orders," and invited Schmitt and his staff to meet with the health department to "discuss the remarkable progress that has been made."

On Friday, nearly all coronavirus-related restrictions were removed in Kansas City, the state’s most populous city, except for some facemask requirements for indoor gatherings. Diners must still wear a facemask when not actively eating or drinking.

The Kansas City order is in effect until May 28. It’s unclear if the new orders in St. Louis and St. Louis County have a specific end date.