Teachers, supporters of Saint Louis Public Schools District staged a "silent sit-in" in an effort to be heard in reopening conversations 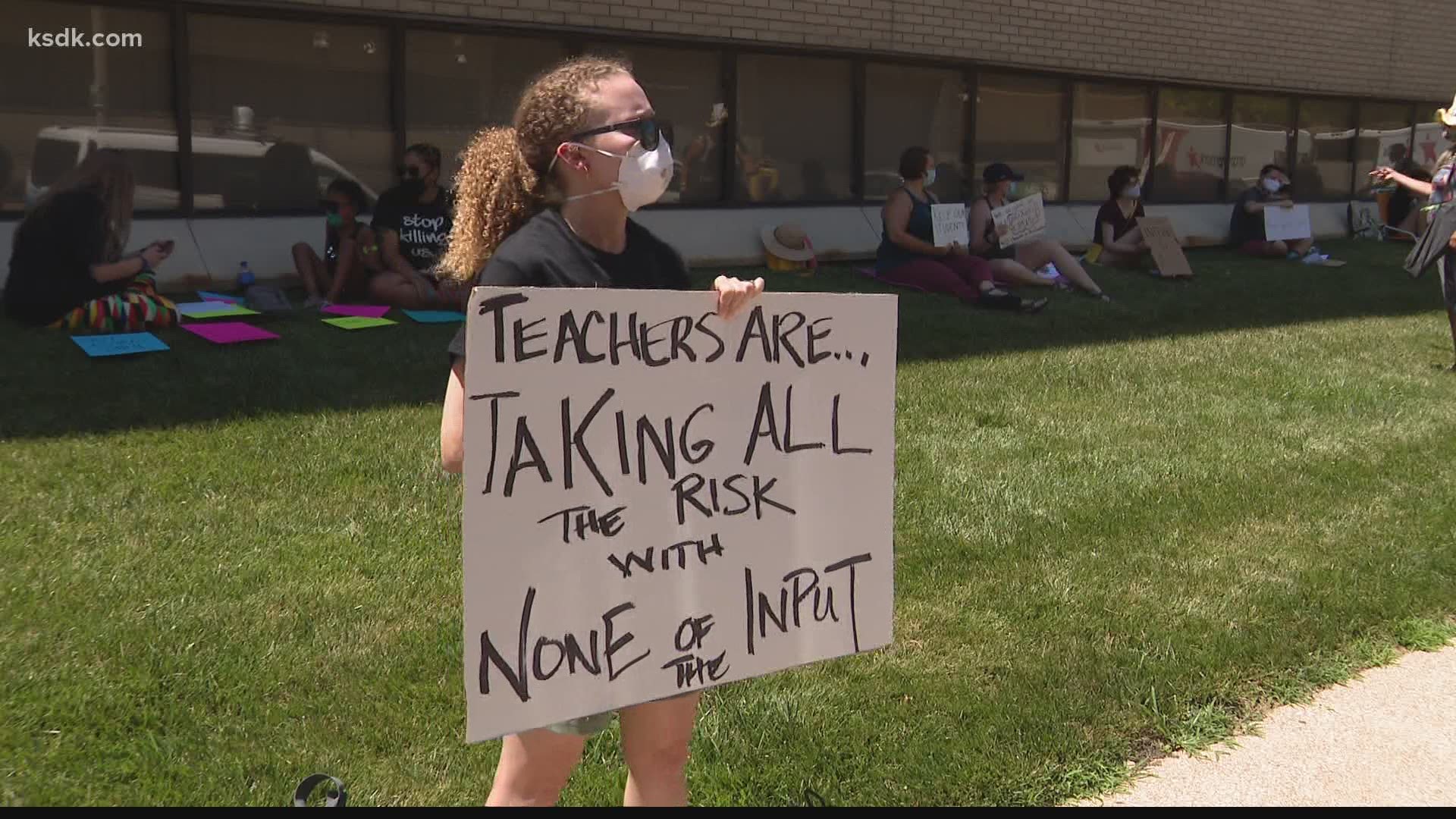 ST. LOUIS — Besides some enthusiastic honking from cars passing by and subsequent cheers from the teachers and their supporters gathered outside Saint Louis Public Schools (SLPS) headquarters Monday afternoon, about 100 participants in the “silent sit-in” let their poster boards do the talking.

“"If the meeting to reopen schools is held online because it's not safe, then why are we discussing reopening schools?" one sign read.

"I miss the early days of quarantine when there was Tiger King and people actually loved teachers," another sign said.

The silent sit-in was staged for two hours downtown Monday because teachers say they haven’t been given a voice in the SLPS reopening plan.

“We were already concerned. When we started to hear about what the plans actually were, we decided it was time to actually take action,” said Grace Hogan, one of the event’s organizers and a third and fourth grade teacher.
The city health department released reopening guidelines, like small classes and staggered lunch schedules.

RELATED: 'At what cost?' | St. Louis area teachers weigh in on reopening plans during COVID-19 pandemic

RELATED: These are the guidelines for schools in St. Louis to follow this fall

This group gathered to demand more:

They’re admittedly big asks and she hopes to bring them to the negotiating table.

“The higher-ups are aware of best practices, they acknowledge that they exist, and there ends up being a second half of that sentence. And the second half is, but we live in the real world,” said Hogan.

The problem, she added, is that so does she: the reality of what a school full of social distancing policies looks like has her concerned.

“It is horrifying to me to imagine my students, many of whom are already coming in the door facing incredible difficulties or pasts, and asking them not to hug their teacher. In fact, don’t touch anyone. Do not touch another human being. And I worry a lot about what happens when we are talking about predominantly Black and brown students whose bodies are already over policed in school buildings, and now we are adding this heightened fear and anxiety in every adult and child? We’re very quickly talking about school buildings that look a lot like prisons,” she said. “We already have problems with policies and procedures in school buildings that do not properly support the humanity of our students and I just see this being a gateway to a horrible set of conditions for students who really deserve better.”

The union representing teachers in the St. Louis Public School District, AFT Local 420, has representatives working with the health department and district on the plan. While some at Monday’s protest argue there still isn’t enough teacher representation in the planning, union leadership said they are working to elevate their voices.

“This is not simple—it’s not rocket science, it’s harder than rocket science “And everybody thinks they’re an expert on it. We’re following the science and the data. That’s what’s going to drive us to minimize the risk,” said Byron Clemens with the Teachers’ Union. “It’s an evolving plan, it’s not written in stone, it can be adjusted, and we’re working on it every day.”

SLPS told 5 On Your Side their “Restart School Committee” established 10 guiding principles, with “a commitment to ensure the highest levels of safety for all: physical and emotional health and wellness” at the of that list.

Tuesday night, Superintendent Dr. Kelvin Adams will present reopening recommendations to the Board of Education. After that, the district will accept public comment before delivering a final plan likely on July 20.

“Any plan that is adopted by the District will be vetted and approved by the City of St. Louis Department of Health. Like other schools across Missouri, our Restart School Plan follows guidelines offered by the Centers for Disease Control and local departments of health,” a District spokesperson said in a statement.” At SLPS, we meet weekly with Dr. Fred Echols and are following the DOH’s guidelines and requirements for welcoming staff and students back to school.” 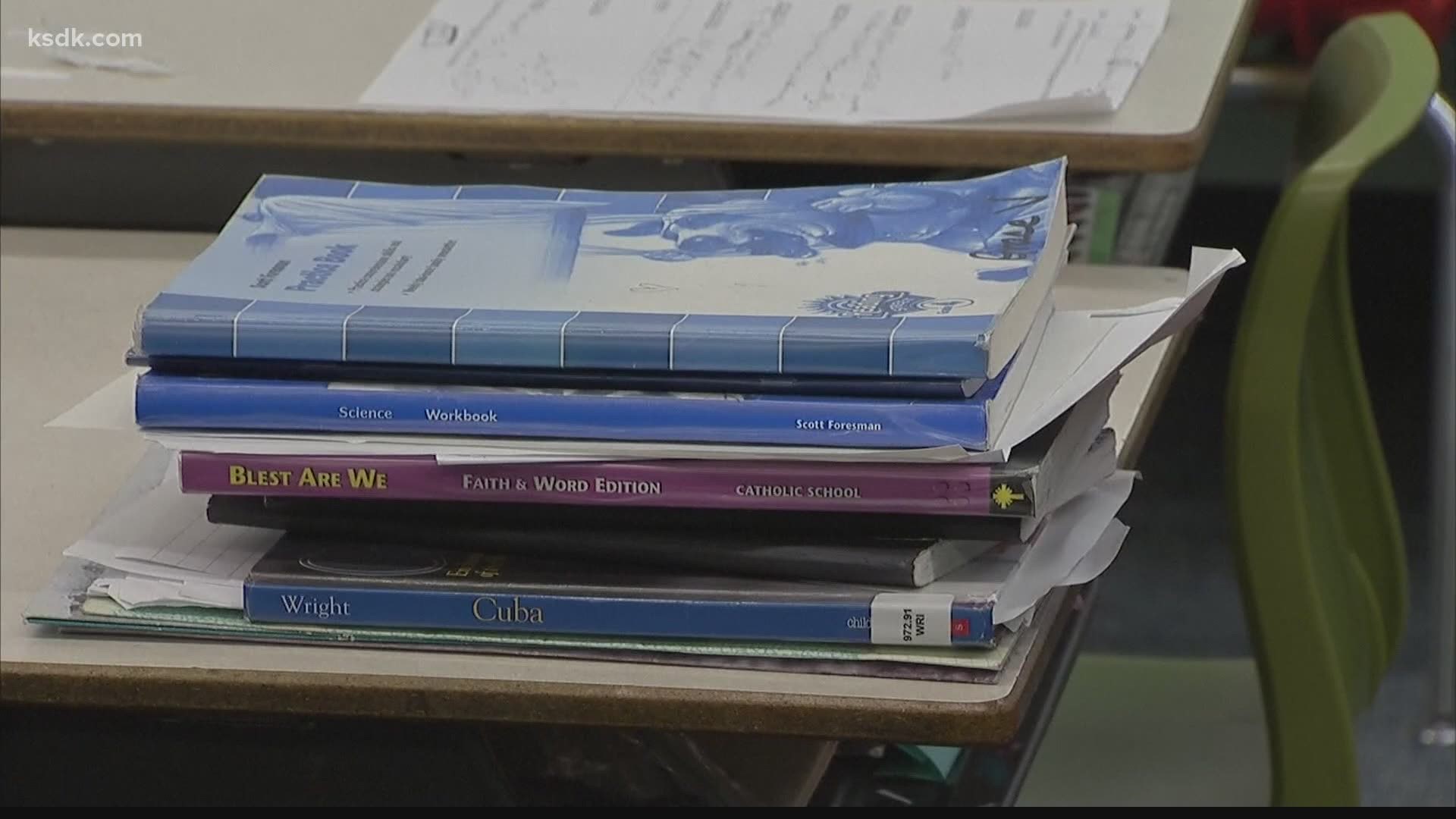