A spokeswoman for Circuit Attorney Kim Gardner said they want a special prosecutor to refile the case, while the defense believes this should be the end of the case. 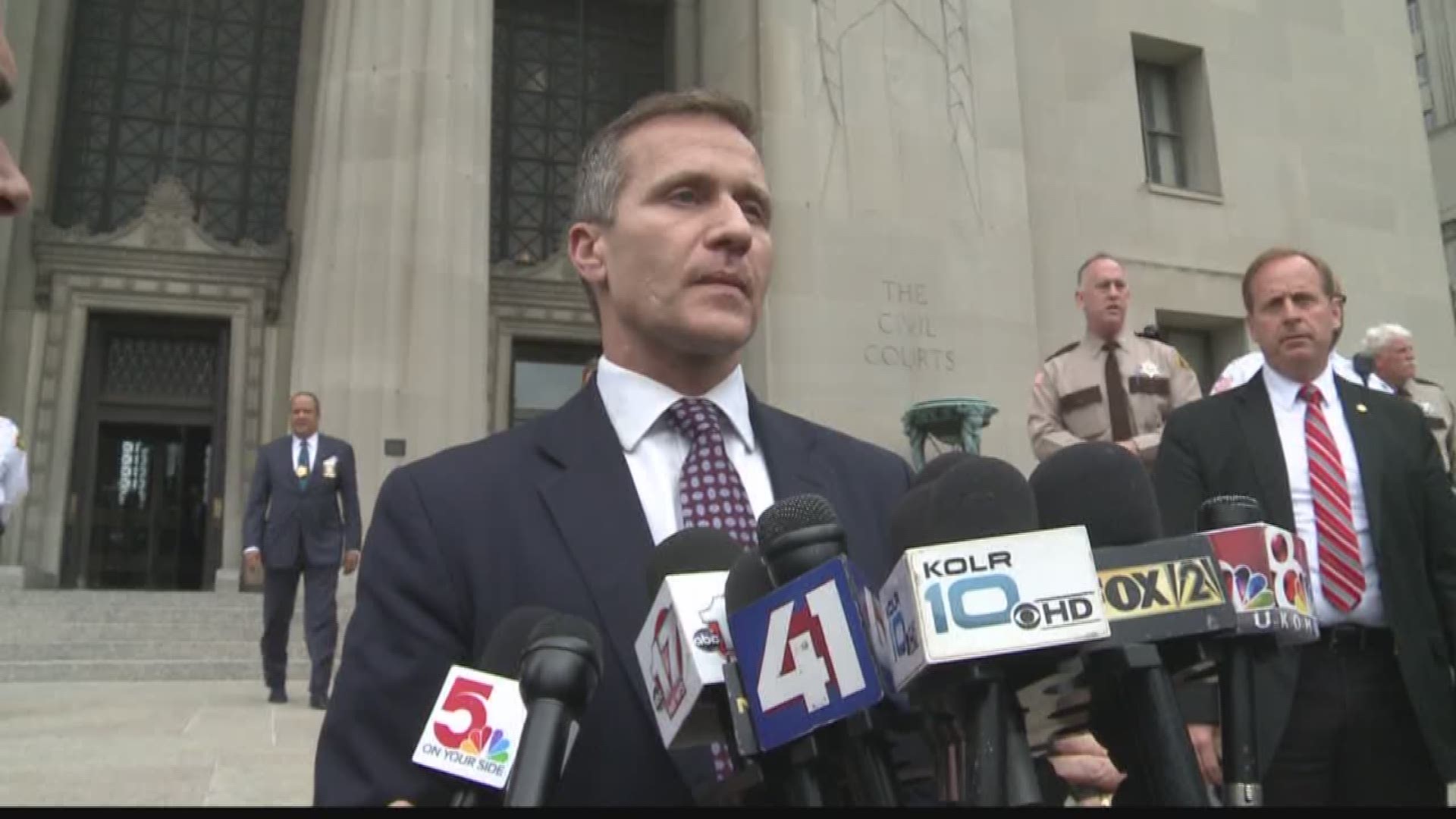 ST. LOUIS – "This was a great victory and a long time coming. I've said from the beginning that I am innocent."

Those were among the first words out of Governor Eric Greitens' mouth while addressing the press outside the courthouse Monday evening after the prosecution dropped its invasion of privacy case against him.

Assistant Circuit Attorney Ronald Sullivan, a Harvard University law professor who is helping prosecutors, was the one to announce that the prosecution dropped the case. The announcement came just hours after Greitens' legal team said the prosecutors did not have the alleged photo at the center of the case and that the prosecutors had stopped looking for it.

A spokeswoman for Circuit Attorney Kim Gardner said they intend to re-file the case and request a special prosecutor, while the defense believes this should be the end of the case.

Defense got up and said it should be over. Prosecutors said they want a special prosecutor to re-file #GreitensTrial

“Anybody else that would be a third-party, objective attorney that would be appointed as a special prosecutor is going to look at the evidence in this case and they’re still stuck with the same lack of evidence,” he said.

St. Louis University Law Professor John Ammann said Gardner was likely named a witness because of her interactions with her team's investigator — William Tisaby — and potentially some of her own actions.

"There's lots of reasons why the defense, in particular, would want her as a witness," Ammann said. "It may not all be about Tisaby and his notes, it may be things that the circuit attorney did herself."

The circuit attorney's office released a statement, which read, in part:

"Governor Greitens has produced no compelling reason to include the Circuit Attorney as a witness for any purpose. The defense team knows that the tactic of endorsing the Circuit Attorney as a witness is part of their ongoing effort to distract people from the defendant’s actions that brought about both the felony Invasion of Privacy and Computer Tampering charges against him."

The governor spoke outside the courthouse Monday afternoon and released a statement on his Facebook page.

The governor's legal team answered questions after his press conference: 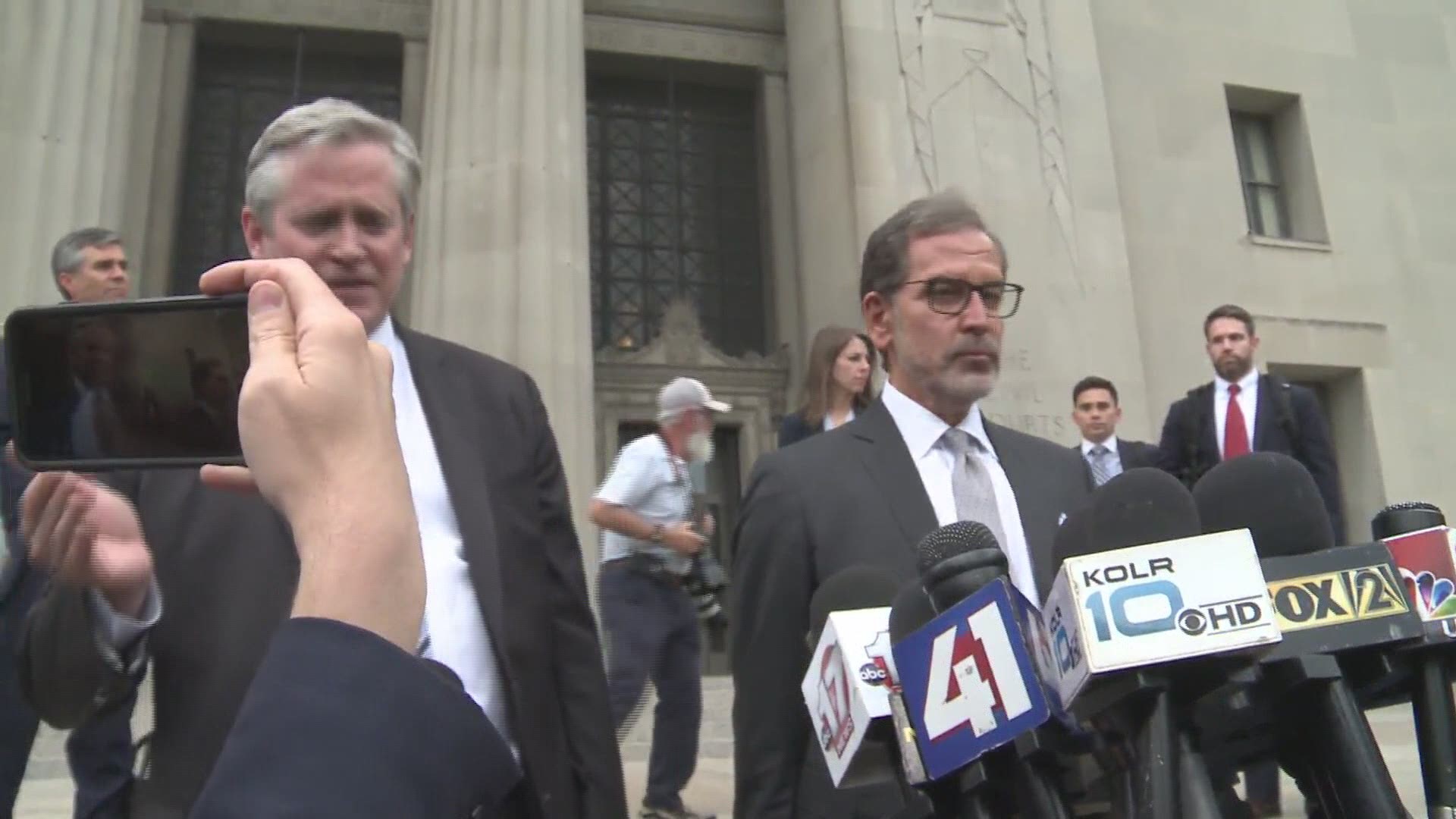 The governor still faces computer tampering charges, but his lawyers believe that case should be dismissed as well.

"I think anything that this circuit attorney's office has touched or its investigators [have touched] should be dropped because it's tainted, it's biased and those decisions cannot be looked at as objective," Scott Rosenblum, a member of Greitens' legal team, said.

Lynch said although these are separate investigations, Gardners' involvement could prove problematic for the computer tampering charges.

As for the invasion of privacy case, Greitens' legal team said they believe prosecutors have 27 days to re-fiel before the statute of limitations runs out.

The special session to consider impeachment begins Friday at 6:30 p.m. in Jefferson City. On Monday, the House committee investigating the governor subpoenaed political groups tied to the governor.

Despite the dropping of charges, and Greitens' celebratory tone, leaders in the Missouri Senate doubled down on their call for Greitens to resign, while House leaders said they will continue the investigation process.

“The dismissal of the felony invasion of privacy charge does not change the facts that have been revealed to the Missouri House of Representative’s Special Investigative Committee on Oversight," a statement from Senate leaders said. "The House’s investigation and the Circuit Attorney’s case are two separate paths. The members of the House committee have discovered a disturbing pattern of allegations, most of which are completely separate from the case dismissed today. They need time to finish their investigation. We now hope the governor and his staff are more forthcoming with the facts, and they decide to appear before the special investigative committee. The governor has lost the moral authority and the ability to lead the state going forward, and we reaffirm our call that he resign immediately.”

Greitens closed his statement by saying "at this time, I'd ask people of goodwill to come together so that we may continue to do good together." Even after Monday's developments, it is unclear if he will get that chance.