It's an adorable tag-team effort you may have seen at the Fragile Forest exhibit at the Saint Louis Zoo. 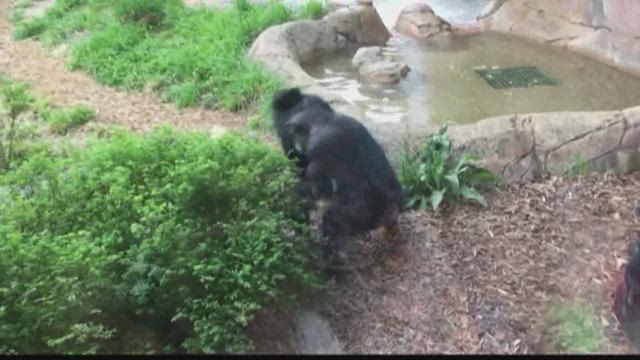 ST. LOUIS - It's an adorable tag-team effort you may have seen at the Fragile Forest exhibit at the Saint Louis Zoo.

Two chimpanzees who appear to be walking in tandem, almost waltzing together, as they move across their enclosure.

Susan Gallagher at the Saint Louis Zoo say it's something the two chimps, Holly and Bakhari have done for years as a way to comfort each other.

"The behavior they exhibit is often referred to as tandem walking or training (as in a train).  The history behind this behavior goes back to their infancy.  Holly was born in March 1998 at Montgomery Zoo, and Bakhari was born on April 15, 1998, at North Carolina Zoo.   Their mothers did not raise them so for the first few months of their lives, they were both hand-reared, and then as very young animals (4-month-olds), they came to the Saint Louis Zoo so they could be integrated into the Zoo's family group of chimpanzees. Chimpanzee mothers carry their infants 24 hours a day, 7 days a week, so tactile comfort is the norm in raising chimpanzees.  When infants are raised with peers, they often cling to each other, even when they are walking. Holly and Bakhari are very bonded having grown up together since the age of 4 months.  As adults, Holly and Bakhari socialize with all the other members of their group and behave like the chimpanzees they are.  But there are still times when the two best friends seek each other out for the familiar tactile comfort they offer each other."