Volunteer pilot reunited with little girl he helped save

When Claire was three years old she had a life-threatening illness and needed to travel to get her treatment. Jay Rickmeyer and Wings of Hope came to the rescue. 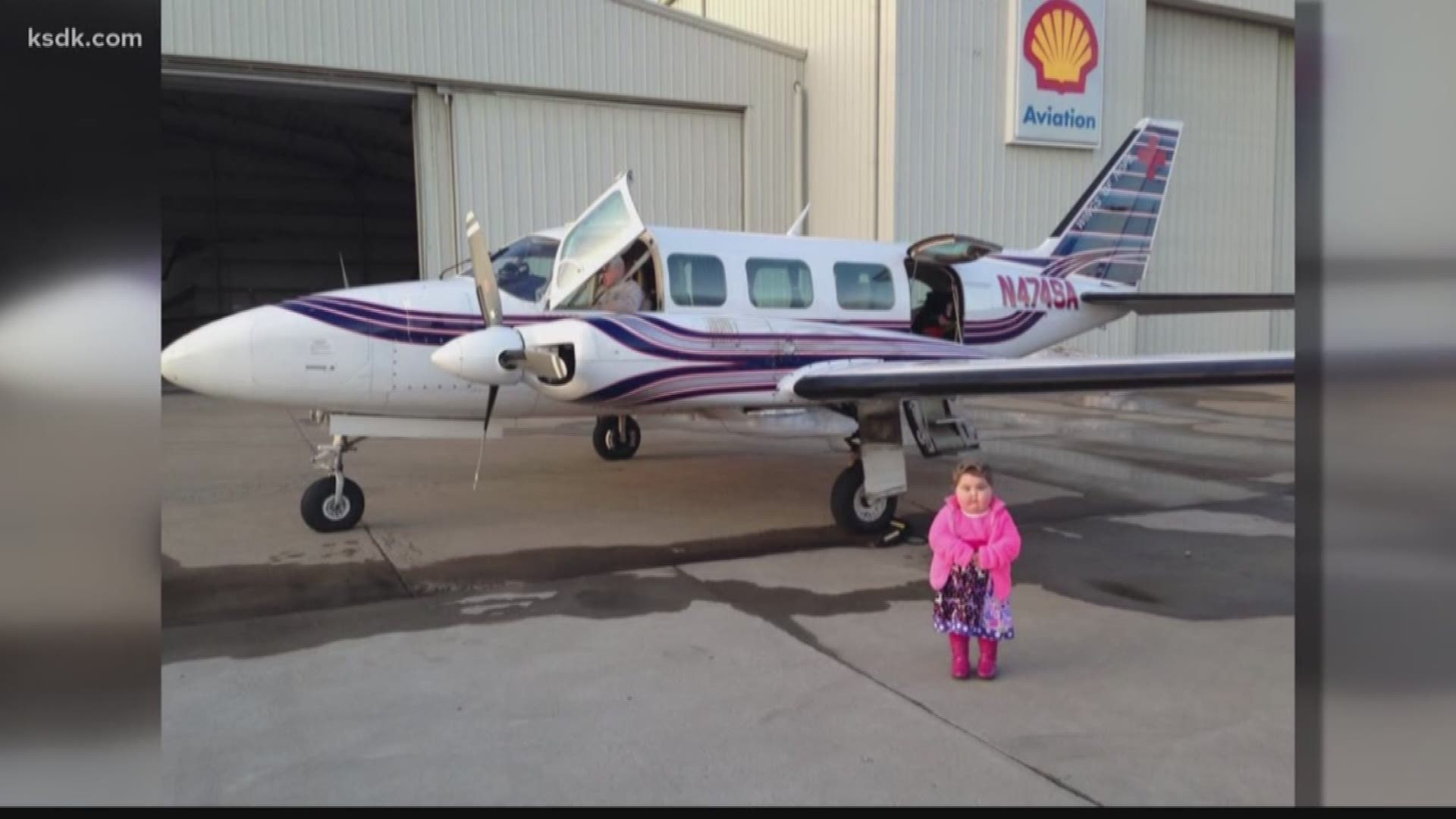 CHESTERFIELD, Mo. — At Spirit of St. Louis Airport, there are angels with fixed wings.

"We fly between two and three hundred flights a year," Bret Heinrich said.

This hangar belongs to Wings of Hope, a non-profit that provides free air transportation for people that

need access to specialists during a medical crisis. And most of the workers are volunteers.

"We have a staff of 14 employees and 262 volunteers," explained Heinrich, the CEO.

One of those volunteers is 79-year-old Jay Rickmeyer.

"He is the heart and soul of our domestic program," Heinrich said.

As a licensed pilot and mechanic, Jay spent 40 years with Army Aviation, the command that manages

the worldwide fleet of Army aircraft. And he's been all over the world.

"He's here every day working, really before anyone else arrives and stays many nights until everyone else is gone," Herinrich said.

As a volunteer pilot, Jay has been on more than 220 missions to more than 130 cities.

Missions like the many trips to Cincinnati, where 3-year-old Claire Biangardi was undergoing treatment for HLH, a rare and devastating disorder of the immune system.

"It's just a life-changing thing in a few moments when I just thought she had a normal virus," explained Claire's mom, Marianne Biangardi.

To survive, Claire needed specialized treatment that included steroids and eventually a bone marrow transplant. And it was Jay and Wings of Hope that gave the family one less thing to worry about.

"It was really amazing to have that when we were in dire straits in our life," Biangardi said.

"Mine is a really minor role. It's the medical professionals that really make miracles," Rickmeyer told us.

Well, this minor role apparently had a major impact.

This is Claire Biangardi today, making her first trip to Wings of Hope in five years. She doesn't remember everything but the important thing is she's now 8 and healthy.

"Just the time that he gave," Biangardi said. "It's wonderful that he's done something like this."

As a father of eight and grandfather of 16, Jay Rickmeyer has every reason to keep his feet on the ground. But, no chance.

"The fun is going to be there until I'm six feet under," Rickmeyer said.

One man who gets a lift by literally lifting others.

Jay is one of the St. Louisans being honored at "Ageless Remarkable St. Louisans Gala" put on by the St. Andrew's Charitable Foundation on Oct. 20. For more information, click here.