Where to find Morel Mushrooms in the St. Louis area

Spring is here, and that means morel mushrooms are going to be popping up all around the bi-state 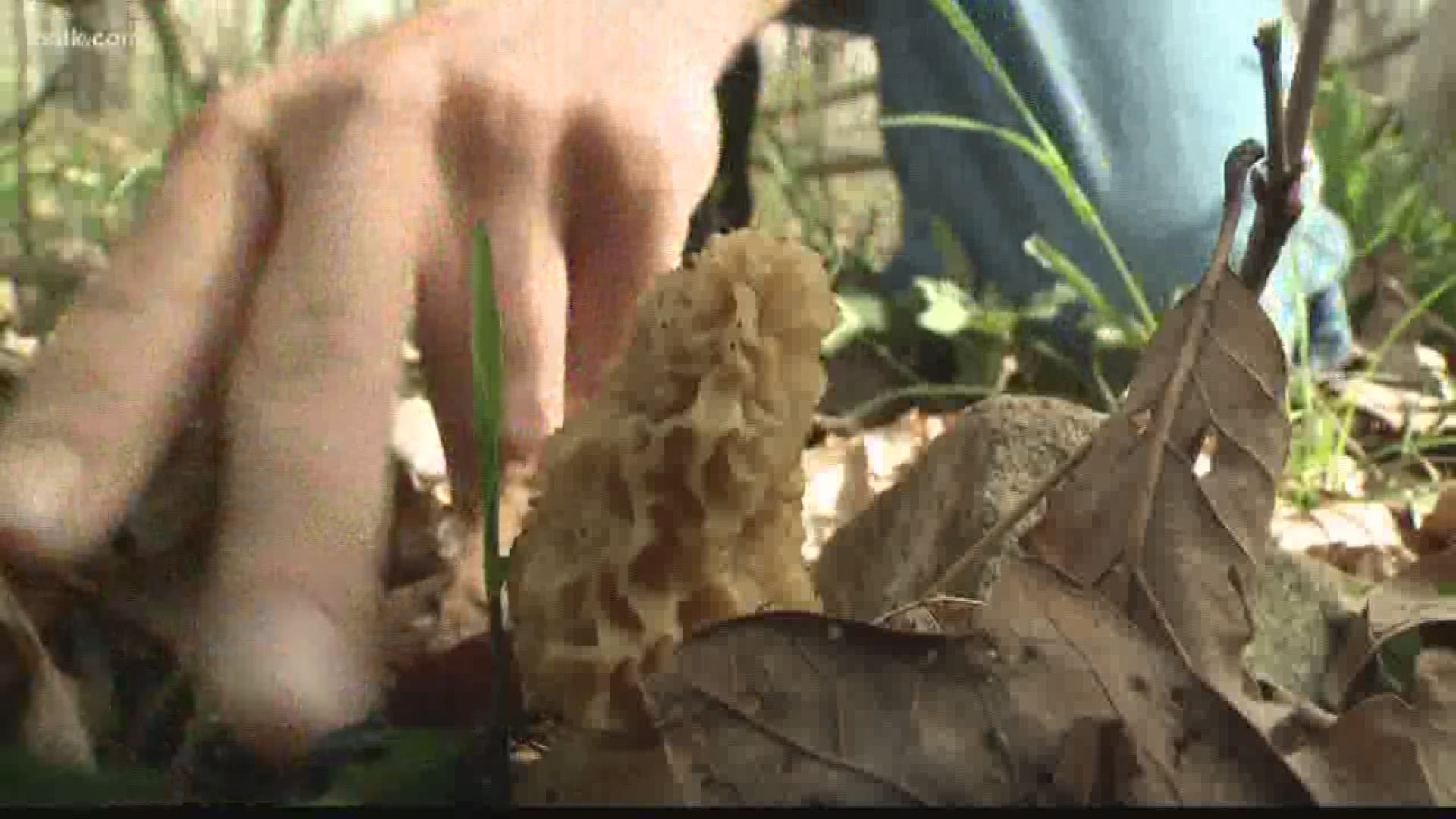 ST. LOUIS — From late March to early May foraging for these small mushrooms is serious business—a business so serious that many folks refuse to reveal their morel spots even to their closest friends and family!

The question many people ask this time of year is, “How can I find morels?” Well, morels are finicky fungal organisms. The underground portion of the fungus only produces mushrooms in some years—mostly based on soil temperature and moisture availability (but other factors play a role, too). Ultimately, most of what we know about finding morels is anecdotal and widely variable, but here are a few tips to help you narrow down good places to look for morels:

Remember, these are just general guidelines – morels have been found growing in all sorts of locations and conditions!

Many Missouri mushrooms are edible, but proper identification is essential to avoid illness and even death. If you're mushroom hunting — whether for ID or for the table — get guidance here.

Enjoy — but approach with caution!

Mushrooms play extremely important roles in the ecosystem, and some are famously delicious. Some are also famously deadly.

When and where can I find mushrooms?

Look for them from early spring (our coveted morels) to late fall (oysters and lion’s mane). Morels have a short, specific growing season of just several weeks in spring, while oyster mushrooms can be found from spring clear through to the beginning of winter — if weather conditions aren’t too harsh. Some species, such as oysters and deadly galerinas, are even known to push up through snow on fallen trees after a few above-freezing winter nights.

Some mushrooms grow only on dead or dying trees, and others grow only from soil. Knowing where a particular species grows, and when it typically appears, is crucial to correct identification. If you’re planning on eating wild mushrooms, nothing less than a 100 percent positive ID will do.

At the first signs of spring, some dedicated morel hunters start tracking soil temperatures, watching for the ground to warm to a consistent 53F before they make their first foray of the year. Others start morel hunting after the first week of night temperatures above 50F. But the single most important factor for any Missouri mushrooms to appear is adequate moisture. If there hasn’t been enough precipitation, or if the substrate (soil or a log) dries out, mushrooms refuse to emerge.

A few days after a good soaking rain in any season is the time to grab your basket or camera and head into the woods. You’re nearly guaranteed to find some mushrooms!

How do I know if a mushroom is edible?

Short answer: there is no test to determine edible versus poisonous mushrooms. Ignore any advice such as “a poisonous mushroom will tarnish a silver spoon,” “if it bruises blue, it’s poisonous,” and so on. These are folk myths; they are completely untrue. Even seeing evidence of animals eating them won’t work here. The only way to tell if a mushroom is edible is by positive identification.

If you’re interested in eating wild mushrooms, we cannot stress enough the importance of learning how to identify them. Field guides will have pictures and descriptions of mushroom anatomy, cap shapes, surface textures, gill spacing — just a few of the features used to determine what species it is. Learning to identify mushrooms is really like any other kind of nature study, except for one huge consideration: if you’re collecting mushrooms to eat, some of them could be deadly poisonous. Take your time, and use common sense: if you’re not 100 percent positive of the ID, don’t eat it. Don’t let wishful thinking make you sick or dead. Be skeptical of your own conclusions!

While it may take a little time to build your knowledge, it’s worth it! There are several delicious mushrooms that are easy to recognize and nearly impossible to confuse with any dangerous species. Once you’ve tasted some of them (using all of the resources below, so you’re 100 percent sure of what it is), you’ll start to see what all the excitement is about. Most wild mushrooms are much tastier than typical grocery store selections!

We recommend you do all of the following:

• Go to workshops and forays. Join a mushroom club. You’ll see lots of mushrooms and learn what the identifying features are. Experts will help with your questions and recommend field guides and other resources.

• Collect and identify what you think is the same species repeatedly. Some mushrooms change appearance dramatically as they mature or even in different seasons.

Check out the MDC field guide to Missouri Mushrooms

Don't let your nose fool you. Mushrooms that smell or even taste good can be poisonous. One common culprit of mushroom poisoning is the green-spored lepiota (Chlorophyllum molybdites), which, when young, looks nearly identical to the common white button mushrooms found in grocery stores. They reportedly taste pretty good, too, but eating just one will lead to symptoms that can put you in the emergency room.

“When in doubt, throw it out!” Until you’ve trained your eyes to know what you’re looking for, we can’t say it often enough!

How do I collect them?

Why you’re collecting a mushroom makes a difference in how you collect it. If you’re new to wild mushrooms, it’s really important to get some experience identifying them before you ever pick any to eat!

Collecting mushrooms to take home for closer examination requires the simplest equipment: a flat-bottomed basket, a roll of waxed paper, a small digging tool (a pocketknife will do), and something for taking notes. A GPS unit might come in handy, too, if you want to check the same spot at another time.

Collect the entire mushroom, including the base. This is important for mushrooms growing in soil. Some mushrooms have a cup-shaped volva that may be buried, others may have a surprisingly long “root,” and some may actually be attached to a buried piece of rotting wood — these are all important clues for identification. You need the whole mushroom for proper identification. Dig gently around the base, a little way away from the stem, to include any underground structures. Try to find fresh specimens that insects haven’t found first. Pick a few in different growth stages, if you can (some change dramatically as they mature).

Keep each different kind separate. Roll them gently in a length of waxed paper and twist the ends, like a piece of candy, or use waxed-paper sandwich bags. Don’t use plastic wrap — it traps warmth and moisture, and the mushrooms will start to decompose rapidly.

For each specimen, take note of the following:

• Whether singly or in clusters

• The colors and textures of all parts (for example, the little parrot mushroom has a beautiful green cap and yellow stem, and it is typically slimy)

• The aroma (there may be some surprises here, from the scent of watermelon rind to that of jasmine flowers)

The more you observe about the mushroom, including where you found it, the easier it will be to identify at home.

Know area regulations and respect private land. Most state parks and conservation areas allow collecting of mushrooms, but regulations vary, so check before you collect. And needless to say, get permission before collecting anything on private land!

Collecting for the Table

If you’re collecting mushrooms for the table (assuming you’re 100 percent sure of the ID, of course), you still need a basket or flat-bottomed cloth bag (a piece of cardboard, cut to fit the bottom of the bag, will add stability). Some mushroom hunters use a mesh bag on the premise that spores will drop and spread while they’re walking in the woods. (We haven’t seen a scientific study of this, but it might be true, so use your own discretion.) Your goal is clean, whole mushrooms that will be easy to prep before cooking.

Plastic grocery bags might seem handy, but they offer no protection to the mushrooms if you bump them into anything. Also, they create a warm, moist environment that makes mushrooms disintegrate quickly.

•Carry a pocketknife (or even a pair of scissors) for cutting the mushroom at the base. Some companies sell “mushroom knives” with a brush on the end for whisking off dirt, because adding only clean mushrooms to your basket will save you a lot of prep time later!

• Bring a basket or bag, as discussed above.

• Be a good sport. Don't overharvest or pick them all. Leave some for the next hiker to find — and so the mushrooms can continue to grow and multiply.

• Keep different kinds physically separate from each other — don’t mix your known edibles with any unidentified specimens. Poisonous mushrooms can contaminate other mushrooms. As suggested above, wrap each different type of mushroom gently in waxed paper or waxed-paper sandwich bags.

• Don't collect from "dirty" places. You may find mushrooms growing beyond the borders of forests, but think twice before gathering them from along roadsides and railroad tracks, or from golf courses, parks, or suburban lawns — chemicals from exhaust fumes, petroleum residue, creosote, pet waste, pesticides, and weed treatments are not what you want on your plate!

Once you’ve got them home

Whether for later study or later meals, store mushrooms in the refrigerator straight out of your basket. While we advise against using plastic bags in the field (where they promote rapid decay), it’s okay to use a plastic bag to store mushrooms in your fridge, where the conditions are cool and dry.

Don’t rinse your collection before refrigerating — wet mushrooms will deteriorate much faster.

Most wild mushrooms don't last long in the refrigerator. Don't collect them unless you're ready to use them soon.

When you place them in the fridge, leave the storage bag or bin slightly open to minimize moisture collection. If you find you must rinse your edibles, do it right before cooking. Lay rinsed mushrooms on a clean towel to dry.