The senator from Missouri said his wife and newborn were inside while protesters gathered outside their home in Virginia. Organizers called it a candlelight vigil 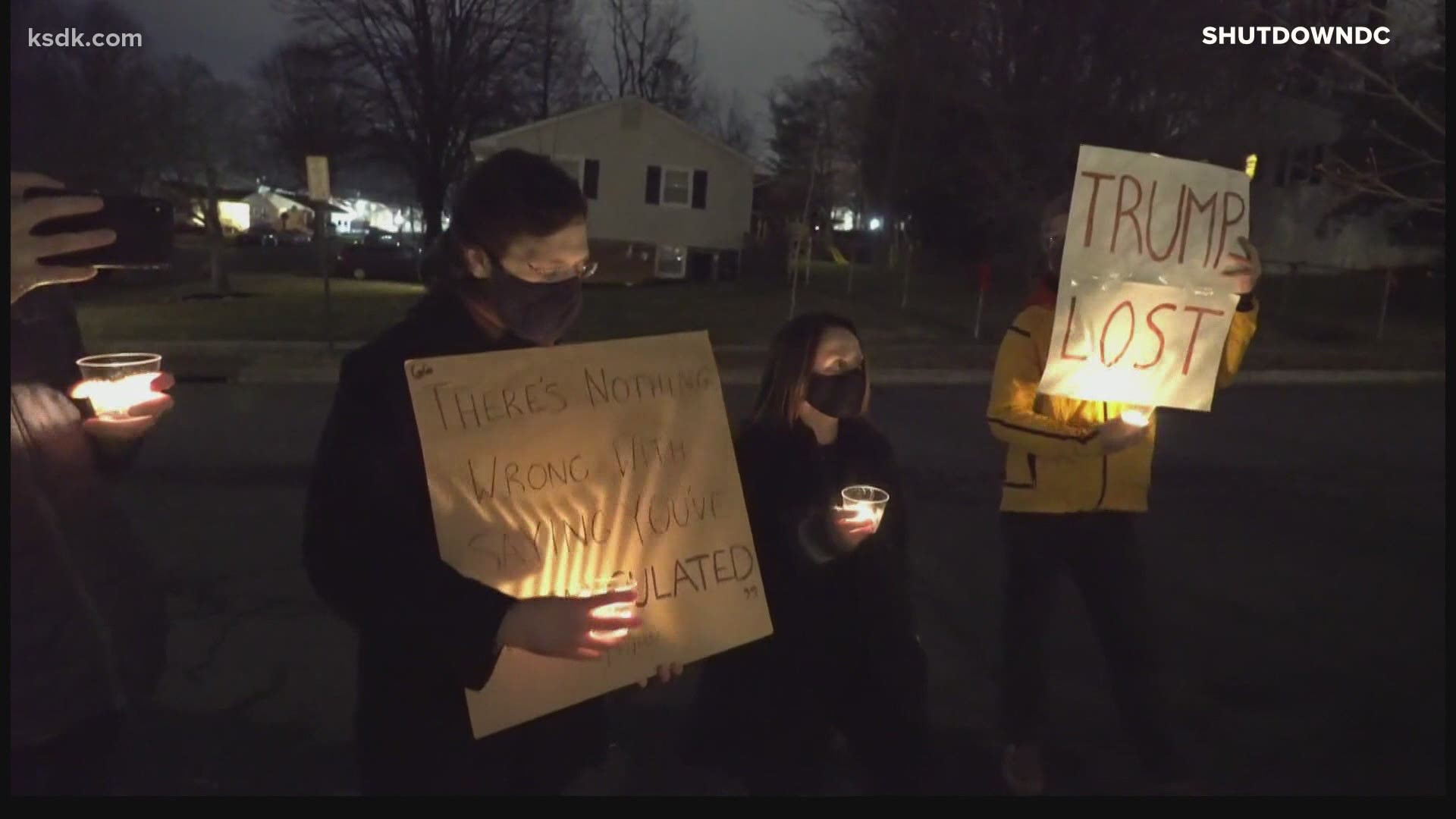 VIENNA, Va. — Missouri Sen. Josh Hawley said his family was threatened during a protest outside his suburban Washington, D.C. home Monday night, while the protest organizers called it a candlelight vigil, and police called it peaceful.

This comes after the senator said he plans to challenge this week’s certification of President-elect Joe Biden’s victory.

Hawley sounded off on Twitter, saying while he was in Missouri, his wife and newborn were in their Vienna, Virginia, house when a group gathered outside.

“Tonight while I was in Missouri, Antifa scumbags came to our place in DC and threatened my wife and newborn daughter, who can’t travel. They screamed threats, vandalized, and tried to pound open our door. Let me be clear: My family & I will not be intimidated by leftwing violence,” he tweeted.

The protest group ShutDownDC organized the demonstration. They recorded and shared on YouTube a video from the protest.

The video shows about a dozen people walking to the front of Hawley’s home Monday evening. They held signs and candles, chanted with a bullhorn and wrote messages in chalk on the sidewalk in front of the Hawley home.

Four people in the group walked up to the front door of the home. They were seen sticking something on the front door handle. The group later tweeted a photo and said they left a copy of the Constitution on the door.

We stopped by @HawleyMO’s house with some friends tonight to encourage him to rethink his attack on democracy. We left him a copy of the Constitution... with Article II bookmarked. #DefendDemocracy pic.twitter.com/dQXQOe8qhz

At one point, a few police officers with the Vienna Police Department showed up in front of the house. An officer was heard telling one of the protesters that she’s been informed it’s illegal for the protesters to be demonstrating in front of a residence. She asked the group to quietly protest while waiting for a supervisor to arrive.

A police supervisor told the group that using a megaphone for an extended period violated the city's noise ordinance. Additionally, protesting outside a private home is illegal in Virginia.

Police told the group the signs, chalk messages and candles they were leaving in front of the home also was considered littering.

In all, protesters were outside the house for about 30 minutes. They ended the demonstration with a prayer and quietly left.

"There were no arrests and everyone left peacefully after receiving the warning from the supervisor," a Vienna police spokesperson said in an emailed statement.

ShutDownDC shared a series of responses replying to Hawley’s tweet.

"It's disappointing that Senator Hawley, an member of what presents itself as the greatest deliberative body in the world, would resort to calling us 'scumbags'. But if he must. We're happy to call him a snowflake,” the group tweeted.

5 On Your Side is working to find out more information from the Vienna Police Department about Monday night’s protest, including whether a police report was filed. The Vienna Police Department spokesperson said he is aware of the incident but didn’t have any details to release to the media as of Tuesday morning. Police don’t expect to release any information until Tuesday afternoon.

Hawley announced last week that he plans to formally object during the Electoral College certification process, which is set to take place Wednesday. He is echoing unfounded claims by President Donald Trump of election fraud in November. Hawley said he wants to “highlight the failure of some states, including notably Pennsylvania, to follow their own election laws.” He did not offer any specifics or evidence of his claims.

The move will force House and Senate votes that are likely to delay — but in no way alter — the final certification of President-elect Joe Biden's win.