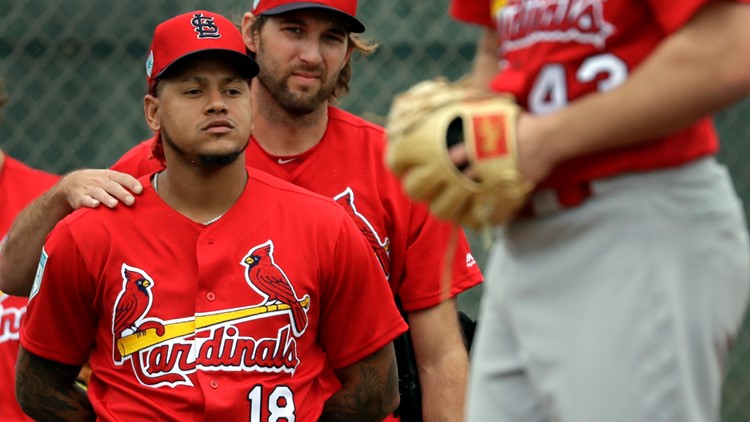 JUPITER, Fla. — Spring training will come and go without Carlos Martinez pitching in a game.

When he does pitch again for the Cardinals, and whether that will be as a starter or reliever, is still to be determined.

Manager Mike Shildt said before Wednesday’s game against the Marlins that Martinez, out all spring because of a weak right shoulder, has been cleared to resume playing catch on Thursday. He will do that for about a week, then be re-evaluated.

A decision on whether to have him prepare to start or relieve likely won’t be made for at least two more weeks, Shildt said.

“That’s impossible to answer right now on a couple of levels; one where our team is because it’s team first, and two, where he’s going to be a week from now. … We’ll take the temperature of where he’s at and what it looks like and where we’re at and what that looks like.

“He’s on a progressive plan with throwing. He’s got to prepare to get back on the mound, that’s where we’re at. You’re probably looking at, irrespective of whether it’s as a starter or reliever, a couple of weeks of throwing to get to the mound to be able to execute bullpens.”

Shildt is fine with delaying that decision, and is just pleased that Martinez cleared the first “hurdle” he needed to pass to resume throwing.

“We’ll be closer to figuring out what the fork looks like (starting or relieving) and what he needs, whether he stays here or goes with us, we’ll figure out what that looks like,” Shildt said.

Obviously Martinez could pitch sooner for the Cardinals as a reliever rather than as a starter because of the time he lost this spring and the need to build his arm back up to throw 100 pitches and cover at least six innings if he is going to start.

The Cardinals also have to decide which is the best spot for Martinez to keep him healthy and not have a repeat of last year’s injury issues.

“Either way we are going to make sure he’s set up for success over the long haul of the season,” Shildt said. “Part of it is how confident he is and we are about his ability to handle X number of months in a starting capacity. We don’t want to have any setbacks like we’ve had in the past with him.”

Martinez, who said earlier this spring that he considered himself a starter, was not as adamant on Wednesday.

“I’m a starter until somebody tells me otherwise,” Martinez said. “If they tell me otherwise I’m more than happy to help the team another way.”

High: Andrew Miller had his fourth consecutive scoreless outing. Over those four innings, he has allowed two hits, has not walked a batter and has struck out six.

Low: The other Cardinals’ pitchers combined to issue eight walks, including walking the opposing pitcher twice, once by Dakota Hudson and once by Jordan Hicks.

At the plate: The Cardinals broke an 18-inning drought without a run when they scored their only run in the fifth inning on an RBI single by Max Schrock … They had just two other hits, both by Marcell Ozuna. One of the hits was a double inside the left field line, his first extra-base hit of the spring … Paul Goldschmidt and Matt Wieters were both 0-of-3 and each struck out twice.

On the mound: Hudson had to come out of the game after three innings because of an elevated pitch count. He only allowed two hits and one run, but did issue three walks … Hicks walked the bases loaded in his only inning, but got out of the inning with a strike out … Tyler Webb also worked a scoreless inning, pitching around two hits.

Off the field: Second baseman Kolten Wong was scratched from the lineup and sent home because he was “under the weather” Shildt said … The Cardinals will play a squad game on Thursday, with John Gant and Brett Cecil scheduled to pitch two innings … Pitchers will begin hitting starting with Thursday’s game against the Mets.