John Burroughs star comes out to break stigma, help others

John Burroughs star running back Jake Bain has scored 50 touchdowns and run for 3,700 yards in his high school career, but because of his decision to reveal one personal detail, those may not be the first things mentioned when talking about Jake Bain. 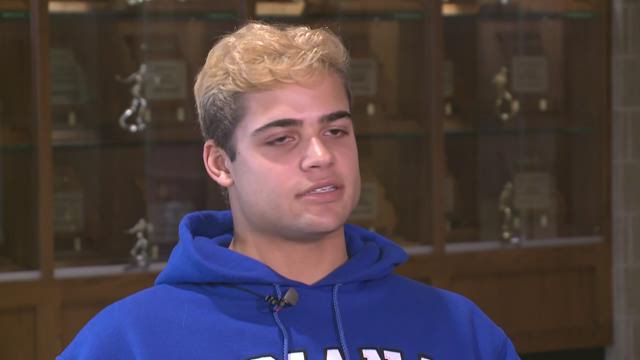 ST. LOUIS – We have had many unique sports stories in our town’s history over the years. The Mark McGwire home run chase, the Rams from worst to first, the Winter Classic and the list goes on and on.

What we haven’t had is an openly gay St. Louis high school sports star, until now.

Jake Bain could have been remembered for being one of the greatest high school football players in John Burroughs High School history, which he is. However, he won’t just be remembered for one of his 50 touchdowns, his 3,700 rushing yards, the stunning 255-yard performance in the state championship game, his nine returns for touchdowns or his school record in the 400 meters.

He also could have also been remembered for his 3.5 GPA or maybe his 28 ACT score. He could be remembered for being a kind friend and a young man respectful of all of his coaches and teachers.

All these things are true, but because of his decision to reveal one personal detail, they may not be the first things mentioned when talking about Jake Bain.

“I was, one, proud of him, and two, I admired him for his bravery," Merrit said. "To stand up in front of the student body and profess anything about your identity is certainly a moment of courage.”

With glitzy stats and a 4.49 40-yard dash, Bain has been recruited by Division I football schools. He chose Indiana State, but he didn’t want to commit until the coaching staff knew exactly who he was.

“I had a meeting with the head coach, Kurt Mallory and I sat him down with my family and said 'I love the place. I love everything about Indiana State but before I commit the next four years of my life, I want you to know I am an openly gay person and that is something that is a part of my life.' I knew he would accept me because that is the kind of person he is. He told me he had coached gay players in the past.”

Wednesday at 10 a.m., Bain signed on the dotted line to play football at Indiana State. The difference is when he went public at John Burroughs he was already a football star and a well-liked member of the community. No one knows him at all in Terre Haute except about this aspect of his life. Jake is not concerned at all.

“Once people realize that me being gay has nothing to do with the kind of person I am — once they figure out who I am as a person — I think they might overcome any type of stereotypes that they may put on me.”

His teammates have known about his sexuality for years. The opposition this season found out about him and they were ruthless at times on the field.

“At the bottom of a pile, I would hear, 'Stay down you fag.' I would hear this is not a sport for gay people.”

His teammates heard the same thing. They showed restraint all year, only once responding and going after the offending party. They showed that restraint because of the way Bain handled it himself.

“I never gave my opponents the satisfaction that they were getting to me,” he said.

After all he's been through on and off the field, it begs one question: why? Bain could have kept quiet and avoided the drama and the scorn. He could have kept it a secret and played his football and gotten his free education.

“My main reason for coming out was not necessarily for me. I have always been comfortable with myself and how people view me," he said. "For me, it was to try and reach out to people who aren’t comfortable coming out. I feel like, especially within athletics, there’s a stigma. I don’t think being an athlete and gay really collide.”

Be sure to watch Frank's story on Jake in TISL Thursday morning at 6:45.