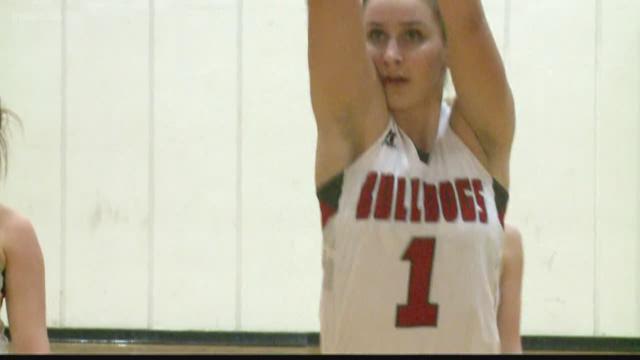 ST. CLAIR, Mo. – Stephanie Sohn's cheers are loud and proud each time her daughter steps on the court, possibly because she doesn't take any moment for granted.

"She had such a hard recovery, and to see her play, I get very emotional," she said.

Her daughter, Gracie, is a sophomore varsity basketball player for the St. Clair High School girls team. She's the starting center. And oh yeah, she was also an All-Regional volleyball player this past fall. But it's been quite the journey for Gracie to be the all-star she is today.

“I just noticed my knees looked different," said Gracie. “My kneecaps shifted inwards ... looked like my kneecaps were not in place.”

Gracie developed malicious mal-alignment in her legs as she grew into adolescence. By the sixth grade, she was having chronic pain that threatened to end her athletic career before high school.

“By the end of my seventh grade year I was barely able to play sports," said Gracie.

Stephanie brought Gracie to a physician who said Gracie would need surgery, but wouldn't operate until she was 18. A second opinion at St. Louis Children's Hospital gave Gracie hope that her athletic career could be saved. Her condition was something Dr. Jeff Nepple had seen before.

“In our adolescent patients sometimes pain in their hip and knee can be due to underlying developmental issues," said Nepple, a pediatric orthopedist for St. Louis Children's.

Gracie's mal-alignment consisted of both her femur and tibia in both legs, putting stress on her knees and hips. If Gracie wanted to stay on the court, she needed surgery now.

“They said my knees would probably dislocate if I kept playing sports so we didn’t want that to happen," she said.

The surgery isn't rare. However it's not exactly common either. Surgeons basically had to break both of Gracie's legs, rotate them and insert rods in order to hold them in place. Gracie had three surgeries total, the last being this past summer to remove the rods and screws in her leg. She still has some screws in her ankles.

After a short rehab stint, Gracie is now playing better than ever, and she is pain-free. She's incredibly thankful she can still play sports because she said "that's all I do ... ever," she joked.

And mom is thankful too.

“This is why we did it. This is what it was all for," said Stephanie.

Click here for more information on the surgery known as femoral rotational osteotomy.