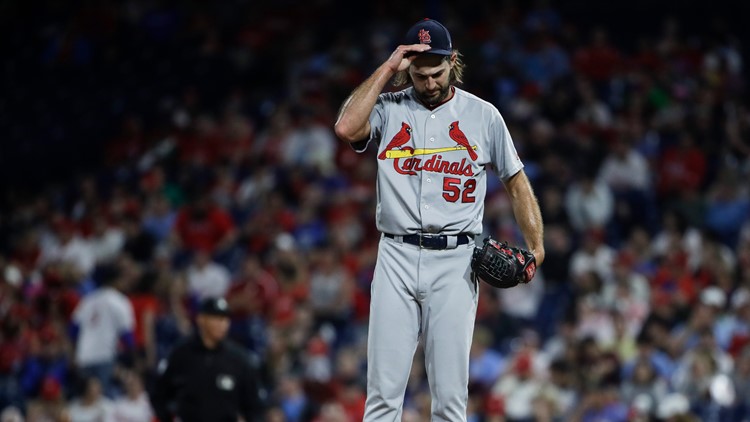 Photo by: AP
St. Louis Cardinals pitcher Michael Wacha adjust his hat during the fourth inning of a baseball game against the Philadelphia Phillies, Wednesday, May 29, 2019, in Philadelphia. (AP Photo/Matt Rourke)

Opinion | When will the Cardinals realize the thrill is gone with Michael Wacha?

Imagine a bus driving down the road. There are passengers on-board, gas in the tank, a schedule to keep, and a prize at the end of the trip.

Now imagine someone instructing the bus driver to take a detour, one that will throw off the entire schedule for sure, endangering the prize.

And then imagine that person telling the driver to swerve off the road entirely and down a hill.

Welcome to the St. Louis Cardinals management team. Michael Wacha will start Thursday's game in Cincinnati. This isn't just a bad idea; it's an insane one based on hope rather than logic.

Last week, Wacha started a pivotal (hint: right now, they all are) game against the Los Angeles Dodgers. It didn't go well at all. One would think that would be enough to cancel all future Wacha starts in red. Nope. Here we go again. How many times to the wishing well?

Here's the facts. Wacha's ERA sits at 5.54. Opponents are hitting .301 off him and his WHIP is a very bad 1.65. He's started 15 games, and only eight of them have been decent. In seven of them, he has given up four or more earned runs. He's also been beaten up in long relief, but not as bad as starting games. Coming into 6-1 or 10-2 games are his sweet spot.

Wacha is on a one-year contract, a free agent this winter. The Cardinals didn't trade him, because no one wanted him — or at least I hope that was the reason. They couldn't have a hope of re-signing him this offseason unless someone in the front office likes hallucinogenic drugs. He's gone, so why not just place him in the bullpen as a soft pellet round of ammunition?

If they can shelve Brett Cecil's highly expensive salary, why not Wacha's? You don't really think Cecil is hurt, do you? I don't buy it.

There are better alternatives than Wacha. A bullpen game with Ryan Helsley opening and John Gant following is one. With bullpens expanding on Sept. 1, don't be afraid to make use of all the firepower on hand. Helsley can pitch more than once a week.

Anyone in Memphis will do, even Daniel Ponce de Leon. He's set to start Thursday. Maybe he can pull off one of those good starts before going toxic. Check Springfield too. Jake Woodford isn't a legit, high-end starter of the future, but why not check on him anyway?

Ex-Cardinals aren't a bad idea. Chris Carpenter could go a few innings. Bob Gibson could follow. Bob Tewksbury and Kent Bottenfield could tandem up. Garrett Stephenson was something before the sixth inning. Todd Stottlemeyer could true grit his way through a few innings on sweat, tenacity, and fear alone. Don't sleep on Jose DeLeon's fastball.

You should be laughing by now, hopefully at the examples above and not the Cardinals' decision-making issues. Wacha will step foot in Cincinnati to start the game, which means malpractice is taking place. I don't care about his four innings of scoreless pitching this year against the Reds. Both came in relief. He didn't start against them in a hitter's park. I don't care about his career numbers against the Reds. It's a fairy tale.

I hope he goes out there and throws seven scoreless innings, but I doubt it.

If the Cardinals are serious about a division race, they shouldn't start Wacha again. Let him start the food line in the clubhouse. Let him get the first slab of ribs. Enter the team bus first. Hit the bullpen door first. Whatever.

When it comes to Michael Wacha, as B.B. King will tell you, "the thrill is gone ... it's gone away." When will the Cardinals realize this?

RELATED: Opinion | Lane Thomas slams his way into lineup, and should stay there