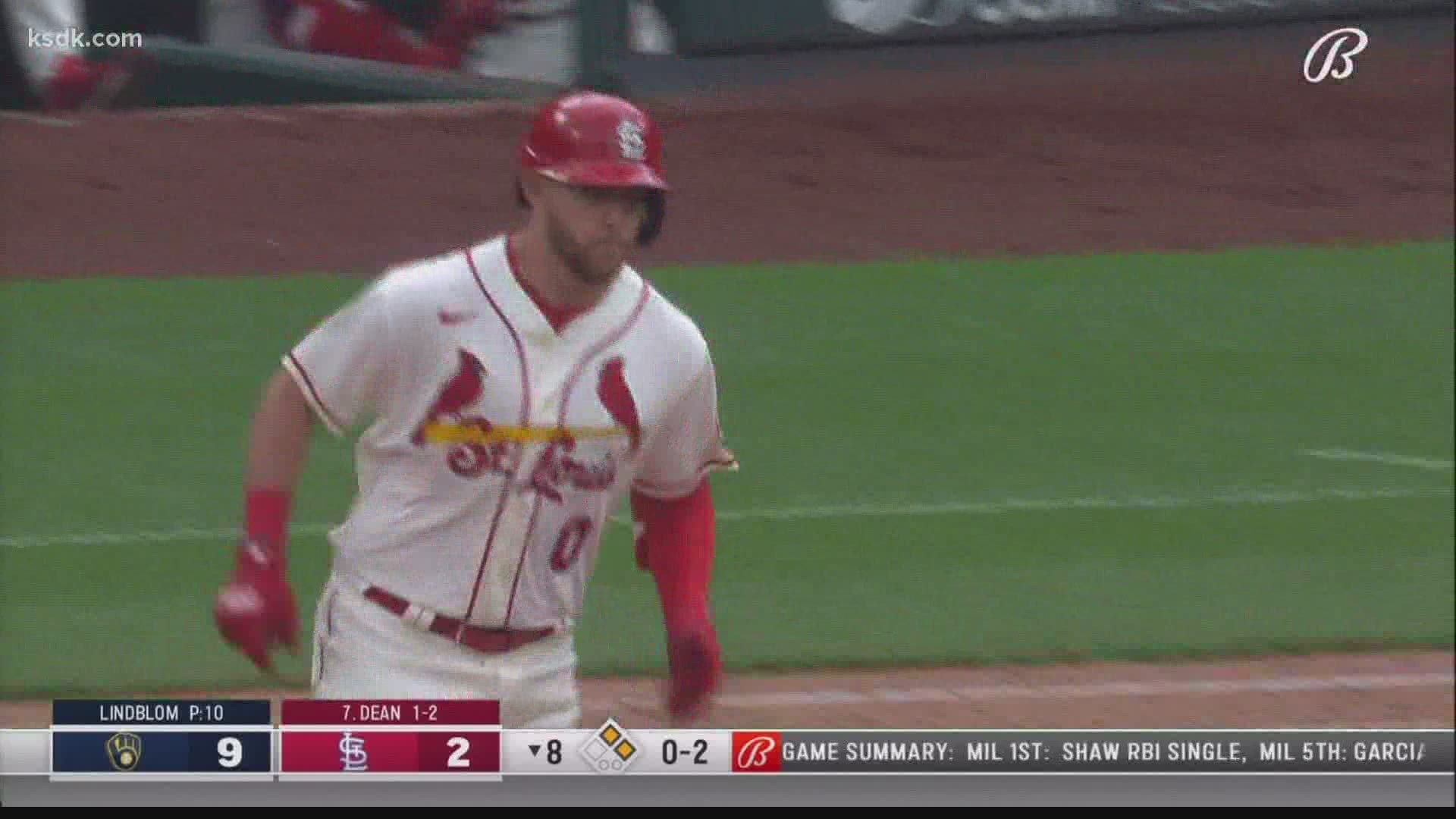 The story of the Cardinals loss to the Brewers on Saturday can be told in three pitches – one Paul DeJong didn’t hit, one Justin Williams could not get out of the way from, and one Andrew Miller threw that could not be caught.

The three-act play began in the fifth inning when the Cardinals, trailing 3-0, loaded the bases with two outs on two singles and a walk to bring their cleanup hitter, DeJong, to the plate. Instead of cleaning up, however, he struck out – swinging and missing on three straight pitches.

“That one at-bat just got outside of himself a little bit maybe, chased a little bit more than normal,” said manager Mike Shildt. “Paul’s been in the middle of our lineup for a long time and done well. He will be fine.”

The middle act came in the sixth, when a Milwaukee error led to two runs and pulled the Cardinals within 3-2 with Williams, who reached on the error, on third. Tommy Edman hit a line drive down the line – but Williams was struck by the ball and when the umpires ruled he was in fair territory, he was called out, ending the inning.

Video replays seemed to show that Williams was in foul territory when he jumped and the ball hit him, and he then landed in fair territory. The play is not subject to review.

“We always teach the guys to get to the line but not on the line,” Shildt said. “If your feet are in foul territory but your body is in fair territory and it hits you, it’s a dead ball out, hence the call.”

The play ended the inning but the Cardinals were still within a run with three innings left before Tyler Webb and Miller combined to allow five runs in the seventh, the big blow a three-run homer off Miller to the first hitter he faced, Keston Hiura, in the game’s final act, ballooning the Milwaukee lead to 8-2.

Here is how Saturday’s game broke down:

At the plate: DeJong, who also grounded out after a double by Nolan Arenado in the first, is 1-of-10 this season with runners in scoring position … Arenado’s double gave him at least one hit in all eight games so far this season. According to the Cardinals, he is the first player to begin his first season after being traded to the Cardinals with an eight-game hitting streak since Roger Maris in 1967 … Austin Dean, who entered the game in  place of Tyler O’Neill after the second inning, hit a three-run homer in the eighth to cut the Brewers’ lead to 9-5 … Yadier Molina reached base four times on three singles and a walk.

On the mound: The Brewers' first three runs came off starter Carlos Martinez, who came out after five innings. It’s the seventh time in their eight games that the Cardinals’ starter has not gone more than five innings … Webb retired only two of the six hitters he faced, allowing two runs, and left two runners on base who scored on the home run off Miller. Miller also was charged with another run when Jake Woodford relieved him with the bases loaded in the eighth and walked in a run.

Key stat: Since he hit two solo homers in the second game of the season, DeJong has gone hitless in 21 at-bats with 11 strikeouts. His strikeout with the bases loaded in the fifth was one of three in the game.

Worth noting: O’Neill came out of the game with what was announced as right groin tightness … After missing the home opener on Thursday because of back tightness, Paul Goldschmidt was back in the lineup on Saturday … Kwang Hyun Kim is expected to throw 85 to 90 pitches on Sunday in a simulated game at the Cardinals' alternate site camp at GCS Credit Union Ballpark in Sauget, Ill. Assuming he recovers well from that, Kim likely will rejoin the rotation at some point on the next road trip … Research found that Arenado’s home run on Thursday marked the first time a Cardinals player hit a go-ahead home run in the eighth inning or later in the home opener – while playing his first game for the Cardinals in St. Louis – since 1955. That year rookie Bill Virdon hit a walk-off home run in the 11th inning to give the Cardinals an 8-7 win over the Milwaukee Braves … The Brewers placed Kolten Wong on the 10-day injured list on Saturday after tweaking his oblique on Thursday.

Up next: The Cardinals and Brewers close out their series on Sunday, with Daniel Ponce de Leon getting the start.