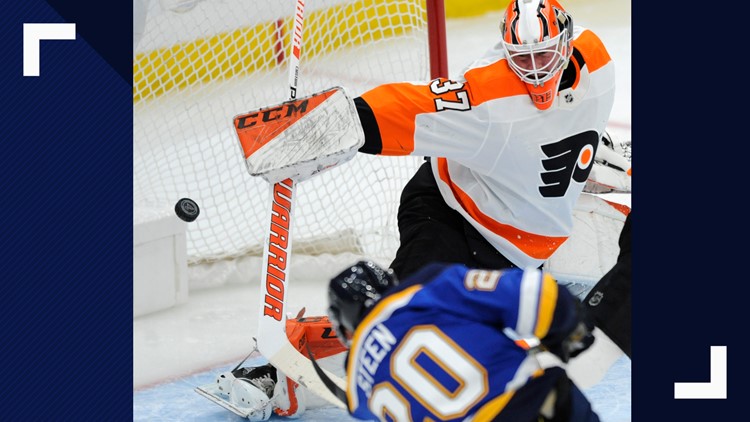 ST. LOUIS -- In the race for first or second place in the Central Division, the Blues needed a bounce back.

After pulling out a point Wednesday against the Chicago Blackhawks, the Blues took care of business Thursday against the Philadelphia Flyers and doing so with a record-setting first period outbreak by scoring five times en route to a 7-3 rout before 18,203 at Enterprise Center.

It will all come down to the regular-season finale on Saturday against the Vancouver Canucks, and the Blues, currently in third place but tied with the Winnipeg Jets in points and one behind the Nashville Predators for first, can finish in either first, second or third.

"We've got to build our game, right," said Blues defenseman Alex Pietrangelo, who had three first-period assists. "One, home-ice advantage is big for us, just a testament to how hard we've worked to get this thing going in the right direction."

Makes that game Saturday afternoon at 3 p.m. a big one.

"Yeah, it's good. I think it's good," Blues interim coach Craig Berube said. "It's good that there's something to play for. It's always a good thing I think."

Make sense? No? Well, it will be a crazy finish, and one that the Blues couldn't envision being in on Jan. 3 when they were last in the league with 34 points, 18 points behind the Jets and 16 behind the Predators.

"It would be huge, a proud thing for us to win the division," said Blues center Ryan O'Reilly, who scored his 28th goal to tie his career high set in 2013-14 with Colorado. "We'll be scoreboard watching a bit. We want to win the game. We want to go to the playoffs doing the right things, playing the right way and see where we fall."

The Blues (44-28-9) and Jets are one point behind the Predators, who defeated the Vancouver Canucks 3-2 after trailing 2-0. The Jets lost 3-2 in overtime to the Colorado Avalanche but hold the tiebreaker on St. Louis as of today. St. Louis, Nashville and Winnipeg each will have one game remaining in the regular season.

The Blues host the Canucks, the Predators host the ... get ready for it ... the Chicago Blackhawks and the Jets play at Arizona -- all on Saturday.

The Blues, 8-1-2 their past 10 games, scored five goals in the first period. It was the first time they scored five in a period since March 30, 2011, in the second period against the Detroit Red Wings.

"It was nice. We were finishing," O'Reilly said. "We came out with some good jump, we got on them right away, we got some good bounces. It gave us some spark. It was a good first for us and got us rolling offensively."

Despite the goal barrage, the Blues allowed three and wanted to tighten things up defensively.

"We made some mistakes and gave up a few, but we tightened her up in the second and third," Blues forward Alexander Steen said.

Steen had two goals and an assist, Brayden Schenn, David Perron and Ivan Barbashev each had a goal and an assist, and Jordan Binnington (26 saves) set the St. Louis rookie record with his 23rd win, passing Jake Allen, who won 22 in 2014-15.

The Flyers (37-36-8), eliminated from Stanley Cup Playoff contention, lost their fourth game in a row and sixth in the past seven (1-6-0). They allowed five goals in the first period for the first time since March 15, 1997, against the Buffalo Sabres.

James van Riemsdyk had a goal and an assist for Philadelphia, and former Blues goalie Brian Elliott allowed four goals on five shots before being replaced by Carter Hart, who made 27 saves.

"I think human nature always comes down to how much intensity you bring," Elliott said. "When you're not fighting for something like the playoffs, it's a lot tougher to get up for it, but it's still our job to win hockey games. That's why it's disappointing the way things unfolded tonight."

The Blues and Flyers combined for eight first-period goals.

St. Louis set its record for fastest five goals to start a game (9:41).

"Lot of goals. Lot of goals," Berube said. "I liked the first period, we just turned the puck over a couple times and they capitalized on it. That's all that really was. I thought we had good energy. We were on our toes, I thought. We just made a couple costly turnovers."

"Eight goals? No, but it felt like it took forever, that's for sure," Pietrangelo said. "It's good. You don't want to give up three goals, but sometimes you get up quickly like that, you get loose. We cleaned it up after that."

The Blues were trying to get Steen his first hat trick with the Blues and second of his career to no avail.

"Yeah, they were trying," Steen said smiling. "They got me some good chances.

"I think after a couple, they started sitting on me a little bit here. It was nice of them to try."

Blues defenseman Joel Edmundson returned after missing the past 11 games with a lower-body injury and replaced defenseman Colton Parayko, who was a late scratch for what Blues coach Craig Berube called a maintenance day with a mid-body injury. Parayko missed his first game this season.

"He's all right, just maintenance," Berube said. "I'm not sure yet (on Saturday). I'll see tomorrow. See how he's feeling. If he skates. Maybe he doesn't skate. We'll see tomorrow."

Also, Robby Fabbri replaced Zach Sanford in the lineup. He had an assist on Steen's second goal, played 11:07 and was a plus-2.

"I wanted to get 'Fabbs' in," Berube said. "He's been out a while. He came in and did a nice job. He looked good. He looked like he had jump, had a few good shots. Again, he was part of that line getting three goals."

"Eddy stepped in. Eddy did a good job. Moved well," Berube said. "He was physical. He looked good."

With Parayko out, Jay Bouwmeester moved to the right side and played with Carl Gunnarsson, and Edmundson played primarily with Robert Bortuzzo.