Blues team up with ManAdvantage to create lifelong memory

In the stillness of the Scottrade Center, with her mom Toni by her side, nine-year-old Kathryn Lankau, anxiously sat on the St. Louis Blues bench.  Looking out at the ice she wondered, why she was able to get out of school early that day. 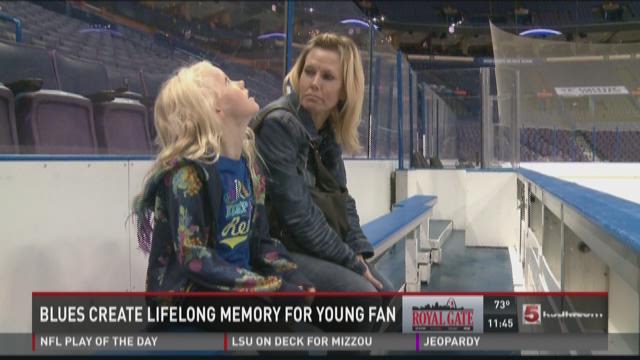 In the stillness of the Scottrade Center, with her mom Toni by her side, nine-year-old Kathryn Lankau, anxiously sat on the St. Louis Blues bench. Looking out at the ice she wondered, why she was able to get out of school early that day.

Then, Jaden Schwartz walked in.

"Kathryn?," said Schwartz. She responded with a hesitancy in her voice, "Yeah." "How are you? I heard you're a big hockey fan." Then he went on to say, "The Blues got you your own hockey gear. Would you like that or no?"

As one of her favorite players helped her lace up her brand new skates, thanks to the Blues and ManAdvantage, there was a combination of smiles and tears. That's because this moment would have meant so much to Kathryn's father Russell, who was a lover of the sport and the Blues.

"I feel very blessed that my son Brenden found ManAdvantage and that he's had the opportunity and Kathryn's equally interested in hockey," said Kathryn's mother Toni Lankau. "The fact that she was able to be graced with this experience is just awesome."

Kathryn and her father Russell used to watch the St. Louis Blues together. It's a bond many fathers and daughters share. But, four years ago, Russell passed away due to septic shock. It was unexpected. He was 40 years old.

"He would be like, 'Oh my gosh. Is that really real?' He would be very surprised," said Kathryn, when asked what her father would say about her skating around the ice with Schwartz.

It's a memory that will last a lifetime, for not just her, but her entire family.

"He'd be smiling and crying, and just think it was awesome," added Toni with tears in her eyes. "Especially that his kids are taking the same interest in hockey and being as big of a Blues fan as he was."

"She's a sweetheart and she's a cutie," said Schwartz. "She's actually a really good skater, so I was pretty surprised by that. But, she seemed pretty excited and it's easy for me to help her out. Hopefully she can play hockey for a long time and it looks like she's going to be a good one."