Olympic rings to find a permanent home in St. Louis

Because the 1904 Olympics predated the existence of the rings, St. Louis previously did not have the ability to use the symbol. 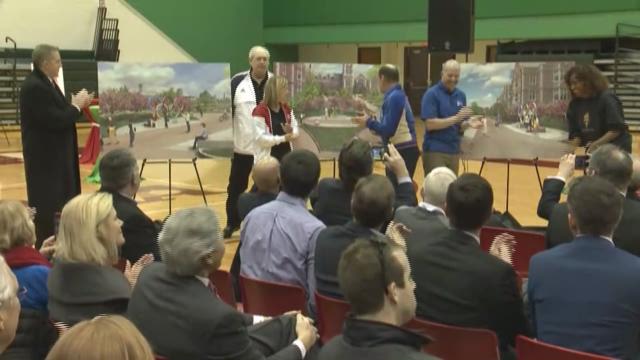 ST. LOUIS -- 1904 is the year that, for many, put St. Louis on the map. It's widely known that in 1904, St. Louis held a landmark World's Fair, that ushered in the new century, helped create the foundations of Forest Park and created folklore that has endured the test of time. So while the city has basked int he glow of that event for more than a century, the other big event that happened that year receives much less recognition.

That's about to change.

Monday, the St. Louis Sports Commission unveiled its plans to raise our city's profile and impact of its being an Olympic city, one of just a handful of American cities to have hosted modern games.

Last month, the newly formed Olympic Legacy Committee, announced a multi-phase effort to enhance the community’s engagement in Olympism. Its goal is to inspire awareness and pride in St. Louis’ Olympic affiliation, and to positively impact St. Louis through its opportunities as an Olympic city.

The project has the approval of the International Olympic Committee, which, in a major step, is granting the Sports Commission’s Olympic Legacy Committee permission to display the Olympic rings – one of the most iconic symbols in the world – at the venues where the 1904 Summer Games took place. Because the 1904 Olympics predated the existence of the rings, St. Louis previously did not have the ability to use the symbol.

Of great significance, the IOC is providing St. Louis the opportunity to display two Olympic “spectaculars” – sculptures of the Olympic rings – at sites that are historically linked to the 1904 Games.

Spectaculars are visibly displayed by Olympic host cities all over the world, such as Beijing, London, Paris, Vancouver, and Sydney as a beacon of their place in the Olympic Movement. The IOC approved the region’s first spectacular for Washington University, home to the 1904 Olympic stadium and birthplace of the Olympic gold medal.

Spanning 16-feet-wide by nine-feet-high inclusive of its medal podium base, the spectacular will be located near the northeast corner of Francis Field, the oldest modern-day Olympic stadium in active use, and will invite people to interact with and enjoy. Installation is scheduled for this fall. A site for the second spectacular will be chosen at a later date.

“The Olympic rings are a timeless global symbol of unity and achievement,” said Michael Loynd, chairman of the St. Louis Olympic Legacy Committee. “In that same Olympic spirit, we hope they inspire our region to think more globally and thoughtfully about each other, and come together as a community to achieve great things.”

Also part of the project’s first phase is an initiative to visibly identify the venues that hosted Olympic events in 1904. Currently, the sites lack prominent markers that capture their historical significance and invite people to interact with and feel part of the Olympic Movement.

Interpretive signage will now be installed featuring each venue’s role in the 1904 Games along with notable facts and stories. Signs are planned for Washington University (site of multiple events), Forest Park (aquatics), Creve Coeur Lake (rowing), and Glen Echo Country Club (golf). Additionally, signage will mark what was the 1904 Olympic Marathon route. Each sign will include an IOC-approved stamp that incorporates the Olympic rings and has been designed specifically for St. Louis’ Olympic legacy program.

The stamp is expected to be approved by the IOC and released in the upcoming weeks.

Complementing the spectacular and signage initiatives will be grassroots programs and educational platforms intended to engage the entire community, especially young people, in Olympism. The St. Louis Olympic Legacy Committee also has developed a website at stlouis1904legacy.org that highlights the history, innovations and relevance of the 1904 Games, and provides information on the Olympic legacy project.

“The 1904 Olympics are forever tied to the history of St. Louis and Washington University, and I am very pleased that there will now be a beautiful and permanent tangible reminder on our campus of these historic Games,” Chancellor Mark S. Wrighton said. “This memorial to the Games will no doubt become a favorite meeting space on campus, and I am sure that, ‘meet me at the Rings’ will quickly become part of the Washington University vocabulary. We could not be more proud to be the home of this important new reminder of St. Louis’ Olympic legacy and its connection to the international community.”

“As host of the 1904 Games, St. Louis is in elite company and forever has a place at an international table that includes the world’s greatest cities,” Viverito said. “The St. Louis Games changed the Olympics for the better. We want to use that spirit of innovation as a model to move our community ahead.”