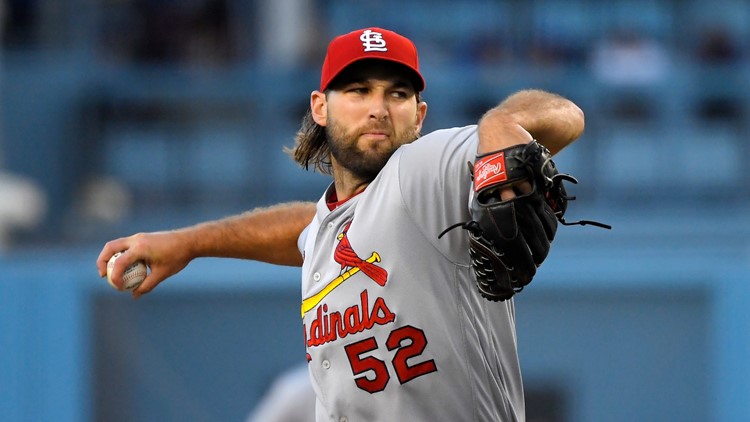 ST. LOUIS — “I can sense the frustration in the air but what if we had done something and it was bad?”

The words out of John Mozeliak's mouth last Wednesday still ring out like a bad joke. Imagine the worst kind of satire and you have the quotes from the mouth of Cardinals' officials and management this past month ... or more like the past year. Maybe the past few years.

Since the complacent deadline came and went, the Cardinals are 1-4, sitting 2.5 games out of first place. The Chicago Cubs team that lost two of three last week at Busch Stadium have won four in a row, even while suffering the losses of Craig Kimbrel and Willson Contreras to injury.

Truth be told, It doesn't feel like the Cardinals are 58-53. The euphoria of their great July now seems like a whimper. A well-made movie trailer that included all the good parts of the roster, but something that would play much worse in feature-length form. Here's a news flash for the defenders: If the playoffs started today, the Cardinals wouldn't be involved. They'd be out.

They're not only behind Chicago but are also third in the wildcard standings behind Philadelphia and Washington. That's how fast things can change when you sit on your hands and do nothing. The Cardinals had needs and did little to address them. It's like having an open wound and bypassing the first aid kit sitting next to you, risking infection.

The more I think about it, the Cardinals' evaluation of talent and their methods in trades is infected. When Mozeliak uttered those words, the sound of an unsure voice was all I heard. Someone who was being held hostage by the fan base, too gun shy to make a bold move. I don't think this 2019 Mozeliak makes the 2014 blockbuster trade that sent Joe Kelly and Allen Craig to Boston in exchange for John Lackey. That doesn't happen this summer.

So many moves have blown up in the Cardinals' face, they don't know what to do next. They have a starting pitcher problem. It is so severe that they marched Michael Wacha-crushed since 2014 when he gave up the season-ending home run in San Francisco-out to face the Los Angeles Dodgers on Monday night. Another West Coast debacle followed. The man carried a 5.15 ERA into the evening, and promptly got beaten off the mound by the Dodgers. He allowed six runs and only got eight outs. That's the definition of insanity being continually practiced by Mike Shildt and Mike Maddux, under the watchful gaze of Mozeliak.

They have this rotation depth problem due to the fact they failed to acquire a pitcher on three separate occasions. First, they didn't sign a starter in the offseason. Don't come at me with price. There were no issues there. Spend the money, match the hype. Their old pal Lance Lynn would have been just fine. He's busy killing it for the Rangers right now. Second, they refused to sign Dallas Keuchel even after he sat on the market in March, April, May, and June. The draft pick compensation dropped, and the Cardinals still did nothing.

Keuchel, who put together a nice run in Houston, is now pitching for the Braves, who lead the East by six games. He could have been signed for $13 million, but the Cardinals said no. I wonder if Michael Girsch wanted him but got overruled by his bosses.

Third, the deadline. Zack Wheeler would have cost the Cardinals an often-injured Tyler O'Neill or a struggling Harrison Bader, but once again, Mozeliak said no way. What if Wheeler comes here and doesn't do well? Oh NO!!! Never mind the fact that the Cardinals have the most depth in the outfield. Heck, they can call up Lane Thomas and not even play him. Randy Arozarena can destroy Triple-A pitching and not even be called up, even if Mike Mayers was just designated for assignment.

Oh yeah, the Cardinals have an outfield problem too. They trade Tommy Pham, struggling last year and wanting an extension, to the Tampa Bay Rays for a plate of minor (and minor league) goods. If Genesis Cabrera turns into the next coming of Aroldis Chapman, I'll eat my words. When the trade was made, I was excited to see what Bader and O'Neill could do. Man, I was wrong. Look at what Pham is doing in Tampa.

Instead of Pham, the Cardinals left Bader in center until he was hitting .195, ran Yairo Munoz and Tommy Edman into the outfield, and currently have the soft-hitting Dexter Fowler out there. After a missed play in center on Monday night and a crisp 1-3 performance at the plate, Fowler is now 9 for his last 51, slashing .176/.263/.353 in his last 15 games. But wait, some will say, he homered on July 28. He's better than last year, but then again, that was nearly impossible to NOT pull off.

The Cardinals are waiting on Marcell Ozuna's hand to let him generate power at the plate, and for Jose Martinez to find one of his streaks at the plate. They also direly need Matt Carpenter to go on a hot streak. While all of this goes down, Thomas and Arozarena sit around in two different parts of the country useless.

You see, when the Cardinals were busy patting themselves on the back with the Paul Goldschmidt trade, they forgot to add pitching. They forgot that Michael Wacha has been inconsistent for five years, Adam Wainwright was injury-prone, Miles Mikolas was unproven, Jack Flaherty was raw, and Dakota Hudson hadn't offered a single team more than 114 innings of service in a season.

They put Carlos Martinez in the bullpen and hoped on a prayer for Alex Reyes to come back strong. A lot of wishing and no sure thing. While Martinez has helped them at the closer position, the starter sure does make a lot more of a difference. Reyes broke his hand and then suffered another injury. All the while, Ryan Helsley has been wasted in a relief role all year even with Austin Gomber going down with an injury and Daniel Ponce de Leon regressing as a starter. Oh, and Hudson hasn't been sharp for weeks.

It's hard to understand the moves, especially when it's hard to understand the words out of Shildt and Mozeliak's mouth. After Wacha's abomination of a start, Shildt said he made "quality pitches." I think he was watching 2013 playoff highlights instead of Aug. 5, 2019. Someone should ask Shildt why Thomas can't get a start with a slumping outfielder. He may mention Fowler's route-running.

Here's the thing. I kept the faith in Mozeliak for years. Whether it was reminding people of his master strokes or his ability to see the big picture, I stood on that hill for a long time. Now, I have left that hill, because I don't think John Mozeliak knows what he's doing. The team is making money, moves have been made, but he's lost his touch. The bold factor of his methods is gone. It is becoming apparent that Mo no longer knows.

If so, tell me why he didn't make a move for a starting pitcher?

Why did he simply trade Pham just to make a trade last year?

How do you challenge a team to be better, watch them take over first place in less than three weeks, and then do nothing to help them? Every time I want to lay a lot of blame on Shildt, I remember he isn't really calling the shots. Mozeliak, under the watchful eye of Bill DeWitt Jr., is making the chess moves.

All I know is the Cardinals have one playoff win since 2014 and could easily miss the playoffs for the fourth straight season, spelling an overhaul of the front office and roster in the winter. How on Earth would they come back anyway intact next year after such a bad crash landing?

Sure, there's still time to turn it around. That's the mantra of the past few years. Just wait for the comeback. It's coming ... just wait ... it's on the way. Keep waiting, and oh please, keep paying for tickets and merchandise. Come on the road and watch them too!

Who needs a playoff team when you are already winning at the box office? Who cares about good reviews when the money trucks are already stuffed? Ask yourself that painful question. Why try to win too hard when you place three million fans in the seats each year?

I'm tired of waiting. The pointless roster moves, utter mismanagement, and complete foolhardy acts by this team makes me want to place my head through a wall. They spend a lot of money just to be in the thick of things, but never enough to put their team over the top. The hesitation is maddening.

Unlike other teams, the Cardinals refused to tank. They kept trying to win 85 games, so they could stay respectable. The payroll is high, but how wisely has it been spent?

The Cardinals refused to lose on purpose, but what exactly are they doing right now?

The latest in a long string of mistakes blowing up in the Cardinals' face.