Kaminsky, now 25, said it was almost a surreal feeling when he walked back into the clubhouse this spring for the first time since being traded for Brandon Moss.

JUPITER, Fla. — It had been a long time – 1,686 days to be exact – since Rob Kaminsky had stood on the mound at Roger Dean Stadium, pitching for the Cardinals.

Kaminsky, in the spring camp as a non-roster player after signing in December as a minor-league free agent, returned to the familiar mound on Saturday when he came in to pitch the eighth inning of the opening game of the spring against the Mets.

It was his first time being there since July 12, 2015, when the former first-round draft pick made a start for the Palm Beach Cardinals against Tampa. Kaminsky was traded to the Indians 18 days later, fought through injuries and became a reliever before finding his way back to the organization.

Kaminsky pitched around a pair of singles, one a bloop fly ball to short center field and the other an infield grounder, in his one inning of work. He got three ground balls and stranded both runners thanks to a good play from shortstop Edmundo Sosa.

Reyes, also from New Jersey, was one of the first people to learn Kaminsky was coming back to the Cardinals and coming to spring training when he got a text message during the off-season.

“I’m excited for him to be here and excited to watch him pitch,” Reyes said. “I’m happy he’s healthy and I’m happy he’s here. He’s gone through some things and so have I. It’s cool for us. We have stayed in touch and now we’re back in the same clubhouse and hopefully in St. Louis soon.”

Kaminsky, now 25, said it was almost a surreal feeling when he walked back into the clubhouse this spring for the first time since being traded for Brandon Moss.

“It’s a little strange to be back but it’s awesome,” Kaminsky said. “There hasn’t been a lot of turnover. I know a bunch of the guys, more of the staff than the players.

“I’ve kept in touch with Reyes and Jack Flaherty. I’ve been in a fantasy football league with Flaherty the last four or five years and that’s kept us in touch.”

There likely are only a couple of spots open in the Cardinals bullpen this spring, and Kaminsky is welcoming the chance to show he should be a candidate for one of those spots.

“The first one (game) is always different than the rest,” Kaminsky said. “It’s good to get that out of the way and just continue to contribute. There’s a lot of lefties here I can learn from.

“All you can ask for is chances, and I’ve got them, so I can’t complain.”

Kaminsky had some other teams interested when he became a minor-league free agent, but there was no doubt where he wanted to go.

“St. Louis was the first team to reach out and I really wanted to come back,” he said. “I’m glad it worked out.”

Here’s how Saturday’s game broke down:

High: Matt Carpenter was 2-of-2, both singles, and both went to left field. He hit a line drive in the first inning and in his second at-bat hit a fly ball that fell in short left.

Low: Paul Goldschmidt will be limited to being the DH in early games of the spring as he works through a sore right elbow. He was hitless in two at-bats.

At the plate: Tyler O’Neill got the first start of the spring in left field and launched a long home run into a 19 mph wind off Marcus Stroman in his first at-bat … Dylan Carlson had the other RBI with a single in the eighth inning following a two-out triple by Andrew Knizner … Nolan Gorman replaced Carpenter in the fourth inning and had one of the Cardinals’ other five hits, a single in his first at-bat … The Cardinals had only six strikeouts, two by Austin Dean … Tommy Edman got his first start at shortstop, a position he did not play last year but will play now as he prepares to back up Paul DeJong during the season.

On the mound: Three pitchers likely to be in the rotation when the regular-season begins – Flaherty, Dakota Hudson and Kwang Hyun Kim, worked the first five innings and allowed a combined three hits with six strikeouts … Hudson got five of his six outs on groundballs and the only hit he allowed came on an infield single … Brett Cecil hit the first batter he faced but then came back and retired the next three batters … Genesis Cabrera preserved the shutout by pitching around two hits in the ninth, striking out three.

Off the field: Shildt announced before the game that, as expected, Flaherty also will start on opening day on March 26 in Cincinnati, the first opening day assignment of his career. “It just means I get the ball first and get the first chance to go out there and get outs and set the tone for the season, the first chance to compete,” Flaherty said. “It’s one of those things you work for and want.”… The manager also said that Kim will be the starting pitcher in his next spring appearance … Kim’s first game with the Cardinals was documented by 15 members of the Korean media. All of the Cardinals regular-season games, not just the ones started by Kim, are scheduled to be televised live in South Korea during the season … Former Cardinal Rick Ankiel is spending a few days in camp working with the coaching staff as he tries to explore a possible job in the game in the future. He also will spend time next month in the minor-league camp … One change at Roger Dean Stadium this spring is the protective netting has been extended from the edge of the dugouts all the way down the foul lines, to the edge of the seats.

Up next: Adam Wainwright will make his first start of the spring on Sunday against the Mets in Port St. Lucie. Carlos Martinez also is scheduled to pitch and Harrison Bader, DeJong and Kolten Wong also are scheduled to make their spring debuts. 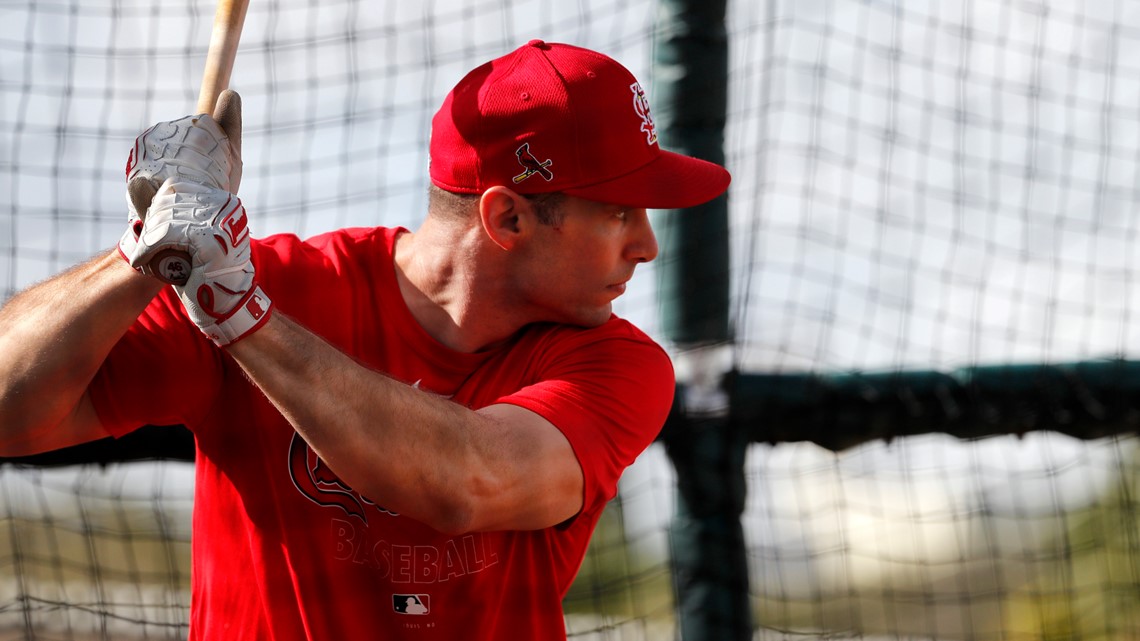 Paul Goldschmidt looking for consistent swing, bounceback season
JUPITER, Fla. (AP) - Paul Goldschmidt never found consistency with his swing last season. Poor swings that yield ugly results early in this year's spring training games may actually prevent that from happening again this season. "That can allow you to make adjustments where sometimes (positive) results can cover up some things."

RELATED: Adam Wainwright wants another shot at the World Series