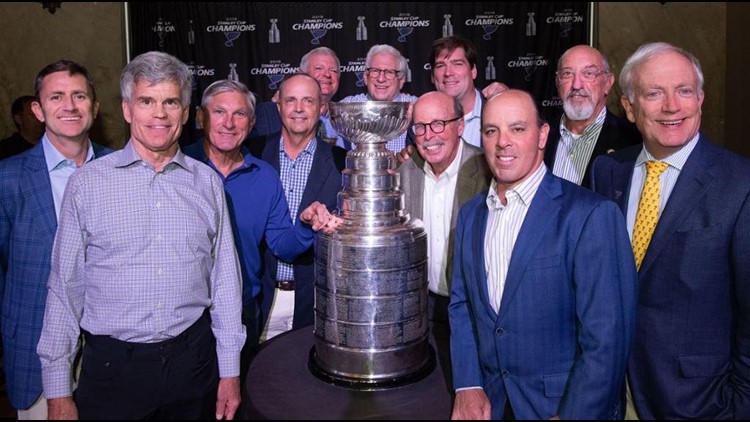 The Blues are all-St. Louis now

ST. LOUIS — Majority owner Tom Stillman announced on Wednesday that he and his local ownership group have acquired the minority interest in the Blues from the previous ownership group, Sports Capitals Holdings, which was led by Dave Checketts and owned the franchise from 2006-12.

The NHL approved the purchase Wednesday at its Board of Governors meeting in Las Vegas and completes the full exit of SCH from any interest in the Blues. The Blues said Wednesday that the current ownership group’s membership will remain the same, with Stillman to continue as the team’s chairman and governor and now means Stillman’s group owns 100 percent of the team.

"This is the best possible outcome for the St. Louis Blues, our city and community, and our supporters everywhere," Stillman said in a statement. "Our all-local ownership group acquired the Blues in 2012 with two overriding goals: win a Stanley Cup for St. Louis and secure the long-term health of the franchise. Today the group made another major commitment, purchasing the only remaining outside interest in the team. All of our members will stay on board, maintaining the all-local makeup of the group. We commend the prior ownership group for its investment in the Blues and for working with us to complete this transaction.

"Going forward, it will be business as usual, both on and off the ice. We will continue to serve St. Louis by investing in the Blues, the Enterprise Center, and the community, and we look forward to raising our first Stanley Cup banner in October."

* Preseason schedule released -- Despite winning the franchise's first Stanley Cup a week ago, business as usual must proceed, and the Blues announced their preseason opponents, dates and times for the 2019-20 preseason schedule on Tuesday.

The Blues will play eight games, opening at Dallas on Sept. 16. They'll play five road games and three at Enterprise Center, including the home-opener on Sept. 22 against Columbus. The Blues will play the Stars, Washington Capitals and Blue Jackets home and home. They'll also play a road game at Winnipeg and the Detroit Red Wings in the Kraft Hockeyville game in Calumet, Mich. on Sept. 26.

Here is the Blues' preseason schedule in full, with times in Central and home games in bold (game times are tentative and subject to change):