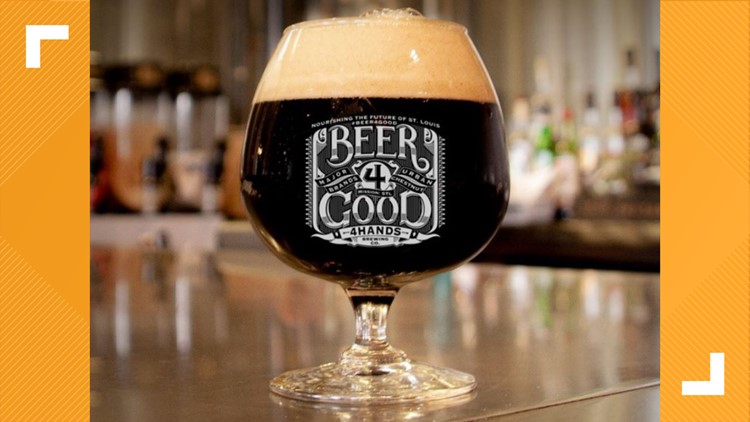 2 St. Louis breweries team up for a good cause

ST. LOUIS — Two St. Louis area breweries are teaming up for a good cause this holiday season.

“We are proud of the success we saw with last year’s Women Who Whisky collaboration, which supported four St. Louis-area nonprofits with the first limited-edition bourbon in a barrel aging process created by all women. With such a unique barrel in both flavor and history, we knew we wanted to pass it forward to continue giving back to our community,” said McCollum, who leads the largest woman-operated and owned wine and spirits distributor in the U.S. “We approached Urban Chestnut and 4 Hands Brewing Co. to help us create Beer 4 Good because of their dedication to the St. Louis region. Together, we created a unique brew that’s infused with our combined passion for moving the region forward.”

The beer is a blend of two ales – an English Barleywine created by Urban Chestnut Brewing Co. and an Imperial Milk Stout created by 4 Hands Brewing Co. – that has been aged for more than a year in the custom Maker’s Mark 46 barrel that McCollum and the team behind Women Who Whisky created. The result is a rich and decadent brew with notes of bourbon, chocolate, sweet caramel, and vanilla.

“From our inception we have always aimed to be much more than a brewery, but a pillar of our community,” said Kevin Lemp, president and CEO of 4 Hands Brewing Co. “Beer 4 Good is another opportunity for us to work in collaboration with amazing local St. Louis organizations to better our community. We have had the pleasure of working with the team at Mission: St. Louis over the last few years. We can't wait to see the results from Beer 4 Good.”

The group will unveil the limited-edition stout barley wine hybrid ale at a celebratory ‘Tap the Barrel’ event on Thursday, Dec. 12 at 6 p.m. at 4 Hands Brewing Co. Taproom, with all event proceeds going to Mission: St. Louis to help empower families to break the cycle of poverty.

To reserve a bottle and secure tickets for the event, visit Beer4GoodSTL.org.

“St. Louis has a history of making great beer, and a history of making a difference. Urban Chestnut is proud to be a part of the Beer 4 Good collaboration, coming together with other amazing St. Louis organizations to help give back and create a better future for our city,” said David Wolfe, co-founder, Urban Chestnut Brewing Co. “We can’t wait to see how St. Louis rallies around this effort, and we look forward to celebrating with the community as we tap the barrel in December.”

RELATED: How to take incredible food photos and wow your friends

RELATED: Sample over 30 area restaurants under one roof at 25th Annual Taste of Saint Charles