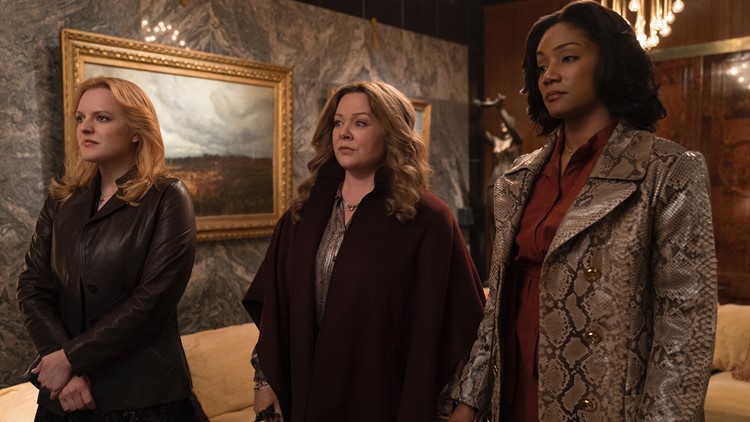 Sometimes, watching a movie can be like walking up a steep hill with no water while wearing the wrong shoes. You keep thinking about turning back and giving up, but in the end, you soldier on and finish the trip because that's the honorable thing to do.

Here's the thing, I finished "The Kitchen" for you. I watched this movie so others won't have to sacrifice those two hours of their life. Trust me, you won't get it back. There are movies that aren't worth your money, but this one is simply not worth your time or attention.

Andrea Berloff (who scored an Oscar nomination for her script for "Straight Outta Compton") makes her directorial debut here, taking a graphic novel about three gangster wives having to pick up their husband's criminal business after the husbands go to jail. Berloff's directing is clunky and her script is indecisive in the worst way, wading between forced drama and lame attempts at light humor (I think).

What seemed like a fun concept took a nosedive into derivative movie-making via table scraps from older (and better) films. Everything you see here has been done before and so much better. It's like a cheap Tuesday night from an Improv theater group comprised mostly of bored housewives.

Melissa McCarthy, Elizabeth Moss and Tiffany Haddish are all talented people in some way or another, but they are either woefully miscast or painfully adrift in this film. McCarthy was brilliant in "Can You Ever Forgive Me", but resorts back to her old tired tricks of persuasion here. Moss is versatile enough but looks like she came to the wrong movie set. Haddish can be hilarious and a force of nature in most films, but overacts in so many scenes here and looks out of place. This would have been better if they just went for full-blown humor, but instead, it's super serious.

This is one of those films where subplots are resolved within minutes. McCarthy's father in the film disapproves of her methods, feeling she is putting her family at risk by entering the gangster business. And then, suddenly, he is on board and supportive. Later in the film, two characters are close to killing one another, have a quick talk and are friends again.

Once again, if it was tongue-in-cheek fluff material, like Robert De Niro and Billy Crystal in "Analyze That", I could have gone for it. But Berloff and her ladies are trying to make a legit female power gangster film, and it stinks.

Remember Steve McQueen's "Widows"? Viola Davis, Michelle Rodriguez, and Elizabeth Debicki as gangster wives being forced to enter the shady business when their husbands are killed during a heist gone wrong. Now that was a great concept executed perfectly by the writer/director. There was intent, drama, action, twists, surprises and a powerful undercurrent that made the film tick.

"The Kitchen" plays out like a parody of "Widows". I am not kidding.

Do I like ripping a movie to shreds? No. If there is a critic out there who wants their time wasted by a bad film, they need to be shown the door. All I wanted was a fine slice of entertainment, something to derail my adulting brain for two hours. This movie surely isn't it.

I wanted to get up and leave the movie about an hour in after I laughed at another scene when I am certain the director clearly hadn't intended for humor. Instead, I stayed and soldiered through, because that's the right thing to do.

Don't see this movie. I did that for you. Watch McCarthy in "Spy" or "St. Vincent" instead. Watch Haddish in "Girls Trip". Watch Moss in "The Handmaid's Tale". Take a look at Berloff's better work in "Straight Outta Compton".

RELATED: Powered by The Rock and Jason Statham's comic timing, 'Hobbs and Shaw' is a rollicking summer cocktail